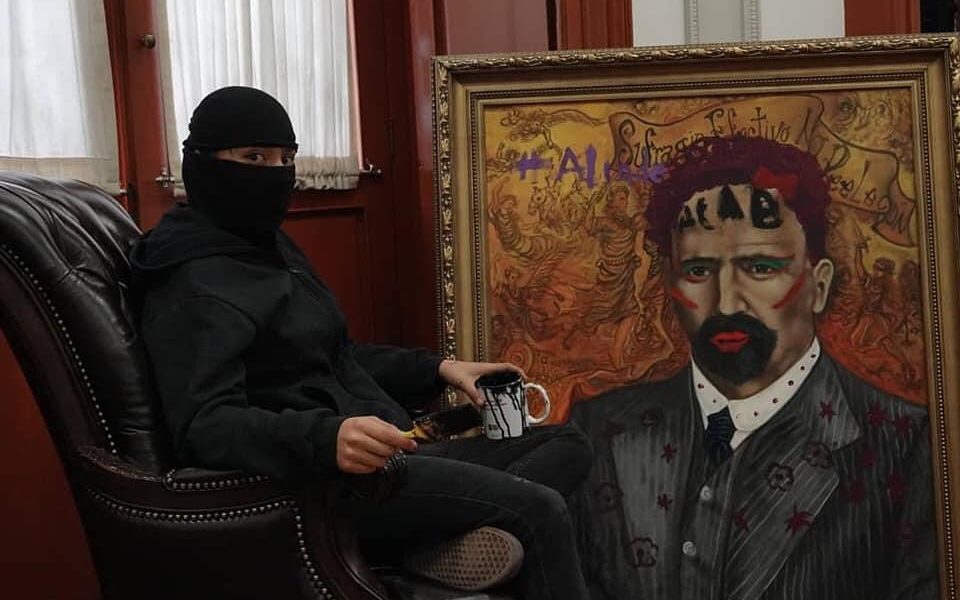 The occupation of the National Human Rights Commission (CNDH) in Mexico City has stirred great debate on social media, in the mainstream media, and among political groups. But it has also garnered broad support from the feminist movement in Mexico which identifies with the deep rage of the thousands of mothers who have not gotten justice for themselves or their daughters despite the government’s promises of sweeping change in 2018.

On September 3, women dressed in black hoods and masks stormed the building, which serves as the offices for the CNDH, a federally-funded institution that oversees human rights violations with the mandate of the United Nations. The protesters evicted workers and occupied the facilities. They tore down pictures of famous historical figures and painted feminist and anti-police slogans on the walls, declaring the Commission building a shelter for victims of gender-based violence. As one protester — the mother of a young woman who was killed four years ago and whose murder was never investigated by the state — declared, “We’re here so that the whole world will know that in Mexico they kill women and nobody does anything about it.” Since then, the protesters have occupied the building and given daily speeches to the press to highlight individual cases of murdered and disappeared women whose cases have been ignored — or in many instances committed — by the state.

In response to the seizure of the building, Mexican president Andrés Manuel López Obrador (AMLO) claimed this week that the demonstration was being carried out by “conservative” sectors looking to make trouble. He showed more outrage over the defacement of paintings of historical figures than the countless denunciations made by women and girls who have been raped, assaulted, and murdered and whose assailants go free. Meanwhile, the head of the CNDH, Rosario Piedra Ibarra, who carries the title of “defender of the people,” dismissed the protest as “a very strange, very dark game” in which “there is intent to obstruct justice.”

The seizure of the Commission’s facilities, which began last week and will continue until “justice is served,” is a direct challenge to AMLO and Ibarra and has thrown a spotlight on the systematic violation of human rights in Mexico, particularly the rights of women and girls.

Despite AMLO’s optimistic speeches in his morning press conferences and government reports, femicide has been on the rise in Mexico during the pandemic. While the president brushes off rising domestic abuse reports as “fake” prank calls, the rate of femicide has gone up by 3.1% since last year according to data from the National System of Public Safety — at least 2,240 women have been murdered in the first seven months of 2020.

The seizure of the CNDH building is not the first time that AMLO has been criticized for his lack of action in the face of the drastic increase in violence against women during his presidency. Despite his progressive rhetoric, AMLO and the government of the so-called Fourth Transformation (4T) are much closer to the Church and the evangelical right wing in Mexico than they are to the feminist and women’s movement. Women’s rights groups and activists have staged massive protests over the past year against AMLO’s anti-women policies, the government’s blatant disregard for the victims of gender-based violence, and particularly against violence committed by police. These protests have reignited over the last several months; on March 8, millions of people took to the streets across the country to protest continued violence against women.

As the occupation of the Human Rights Commission has highlighted once again, the state has no solutions to the problem of gender-based violence. Violence against women is a structural problem that has its roots in the patriarchal and capitalist system. In fact, whether it is by direct intervention or by complicity, the state is responsible for these injustices — for the thousands of murders and disappearances of women and girls each year. As human rights lawyers Alejandra Santamaría and Víctor Escalante explain:

Even if it is not a direct order, the state generates the necessary conditions for femicide to occur. Among these conditions are the precariousness of work and living conditions for working class women, as well as little or no lighting in the neighborhoods, unsafe public transportation, and many others. This causes women to go out to work at dawn and return again at night in extremely unsafe conditions in marginal neighborhoods, facing the shadow of femicide every day.

Despite the fact that Mexico has, in recent years, made advances in women’s rights and implemented initiatives to try to address violence and discrimination — including the inclusion of the category of “femicide” as a particular type of crime, the development of city-wide alerts to warn people of gender violence, as well as the decriminalization of abortion in Mexico City and Oaxaca — these measures have proved woefully insufficient. Violence against women and girls continues to rise, along with increased levels of poverty and precarization for millions of people across the country as a result of the pandemic and economic crisis.

In light of these conditions, it is urgent that the thousands of mothers of the victims of femicide and kidnappings, together with feminists and women in struggle throughout Mexico and beyond place their trust in their own forces and move forward in consolidating a massive women’s movement that fights for their demands in the streets, without any trust or support for the State, its parties, or its institutions.

Though it is a powerful symbolic act, the occupation of the Human Rights Commission must be linked to a broader fight. It must be part of a movement that decides the course of the struggle through assemblies and democratic and independent spaces, unified with other social movements and the labor movement. Only the collective power of the working class and oppressed can challenge gender-based violence and the state’s role in the murder and disappearance of thousands of women and girls across the world.

Justice will never come from the very institutions that have been complicit in innumerable crimes against women and all other oppressed groups. Alongside mobilizations in the street, it is necessary to establish independent investigative commissions made up of leaders in the fight against femicide and leaders in social, political, and human rights organizations who will — independent of the government — demand that the state open all investigations files and grant full access to the families of victims in addition to providing all necessary resources to carry out the investigations.

As long as the state, its institutions, and the businessmen and politicians at their service are allowed to operate with impunity, violence against women will continue. Only a unified force composed of the feminist movement, student and political organizations, and the trade unions can impose measures against the state and guarantee reparations for the harm done to the mothers, children, and relatives of the victims of gender-based violence.