Fibromyalgia, an Expression of Gender Violence 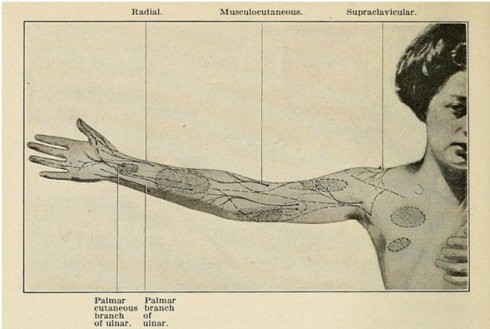 Picture from: Pain, its origin, conduction, perception and diagnostic significance., 1914

Imagine you wake up feeling you were severely beaten. Last night was a sleepless night. You wake up numb with an extreme pain throughout the body; you start the day exhausted and dazed. The diffuse pain and fatigue persists throughout the day. Now imagine that this happens every day, every night, every month…*

Fibromyalgia is a complex rheumatic disease, mainly characterized by two symptoms: chronic musculoskeletal pain and generalized tiredness or fatigue that does not decrease with rest.

It also involves other common, but not essential, symptoms such as insomnia, morning stiffness, paresthesias (burning or stinging feeling in arms, legs and feet), headaches, irritable bowel syndrome, presence of anxiety, depression, concentration problems and problems with clear thinking (fibro fog); which are not shown through any clinical exam.

Even today, this disease can only be diagnosed by discard with other conditions through laboratory studies. It has also been found that there is some genetic predisposition, by an excess of adrenaline which the body is unable to release, and also that in a period of the patient’s life there was resistance to pain.

Reaching the concept of fibromyalgia, was the product of a long history of research that started from mid-nineteenth century, and it was not until 1976 that the term was coined, being more precise highlighting the painful phenomena and the absence of inflammatory data.

However, being very general and old symptoms to determine the disease until today, there are diseases that are often confused with this one. Such case was the so-called Gulf War syndrome in 1991. Both the US and Britain sent to this war mostly healthy young soldiers who returning developed a chronic, disabling disease, with symptoms very similar to the fibromyalgia. The most recent discoveries in April 2014 show that the cause of this is exposure to chemical agents.

Fibromyalgia is a complex, unknown or misunderstood condition by most physicians and society in general. This ignorance inevitably leads to a persistent mistreatment of the multitude of people who suffer it, they are often stigmatized, as they are believed to be hypochondriacs, manipulators or hysterical. This situation leads to people who suffer fibromyalgia to isolation, depression and low perceived to have support.

Its relationship with violence

It is demonstrated that the presence of domestic violence and abuse for lengthy or lifelong periods of patients is a factor.

It is said that fibromyalgia should be treated by health and government authorities as a public health problem of gender, as 90% of the affected people are women, being about 2% of the total population in Mexico who have this disease.

As there is very little knowledge and research about it, there is still none specialized medicine, there are drugs that help such as anticonvulsants, antidepressants and anxiolytics. Pharmaceutical companies do not see as a good business the development of an appropriate drug to the disease.
The International Network for the Rights of the ill, has declared fibromyalgia as the painful epidemic of the century in Mexico since 2008.

In a country such as Mexico, where femicide, gender violence, rape, harassment by hands of even the same security institutions, trafficking and disappearance are the daily bread, and on the other hand precarization and exploitation labor are increasing, make it clear that this condition can be expanded on a large scale.

For working women living with this disease is even more difficult, not because they fulfil double workday (one at home and another productive) but because it is very expensive to face, because in order to be treated, a rheumatologist, psychologist, nutritionist and a therapist or even a coach are needed. Although it has been set out by many doctors, it is not taken as a disabling illness; it is common that the workers are forced to leave their jobs or employed in more precarious and often harder works but involving them less working hours.

People with this condition have the same right to obtain incapacity as any patient with a chronic condition. It is necessary for the authorities to implement needed public politics to detect and address this disease.

In presence of the dismantling suffered by health institutions, it is becoming increasingly difficult and more expensive that the illness can be attended. It is needed to stop taking health as a business and take it as a right where we can all access without discrimination or restrictions.

Job precarization should be eradicated. It is essential that national labor policies that end with the exhausting days, harassment and abuse that cause disabling diseases in workers such as fibromyalgia are implemented. Health is everyone’s right.