Fighting Islamophobia in France and Beyond: For an Anti-Racist, Internationalist Feminism that Fights Against All Forms of Violence!

Activists from Du Pain et des Roses published this statement to denounce the current Islamophobic wave in France. Their statement is in defense of a revolutionary, anti-racist, internationalist feminism, and against a bourgeois and racist feminism.

Image based upon a photograph of the aftermath of an Islamophobic incident in France.

Editors’ Note: For the benefit of readers unfamiliar with the events described in this statement, we offer the following brief summary. In early October, four French police officers were murdered by a colleague that the government has portrayed as a convert to radical Islam. In response, French President Emmanuel Macron and Minister of the Interior Christophe Castaner (in separate speeches) called upon the public to be vigilant for signs of possible radicalization among Muslims in their own communities and to denounce to the authorities anyone they suspect. Castaner’s list of warning signs, which has been the subject of considerable mockery, includes wearing a beard or a full veil and observing Ramadan “in an ostentatious manner.”

The previous month, Minister of Education Jean-Michel Blanquer had condemned the FCPE, France’s largest parents’ association, for issuing a poster portraying a woman in a headscarf along with the words, “Yes, I go on school trips, so what? Secularism is about welcoming all parents without exception.”

Blanquer conceded that there is no law forbidding women in headscarves from accompanying children on school trips. In fact, earlier in the year he had spoken out against just such a bill when it passed the French Senate—not, it is now evident, out of any lack of sympathy with those who sponsored the bill, but because, as he said, such a step “will create many problems in the development of school trips.” In responding to the FCPE poster, he argued that bringing women wearing veils on school trips should be avoided “as much as possible,” adding that the FCPE had made a “regrettable” error by publishing the poster.

The government, in other words, declares its opposition to a formal ban on women in Muslim dress accompanying school trips, while simultaneously making quite clear its sympathy with those who seek to pass such a ban. The effect of this is to encourage the persecution and marginalization of Muslim women, while providing “legal” cover for those—including the Minister of Education—who find it useful to have access to an eminently exploitable  pool of marginalized and persecuted people who can be made to work for little or no pay.

It did not take long for Blanquer’s words to have their effect. On October 11, at a public plenary session of the Regional Council of Burgundy-Franche-Comté in Dijon, a member of the far-right Rassemblement National (RN) party (formerly known as the National Front) verbally assaulted a Muslim woman who had accompanied her son on a school field trip to observe the democratic process. RN member Julien Odoul, no doubt emboldened by the recent utterances of Blanquer and others, demanded that the woman, known in the press as Fatima E., be required either to remove her hijab or to leave the chamber. The head of the council refused this demand, whereupon Odoul and the other members of the RN who were present stormed out.

In response to all of this, demonstrations defending the rights of Muslims have erupted across France, involving students and members of the general public. It is vital that we take to the streets to defend the oppressed and persecuted. But, as our comrades from Du Pain et des Roses argue below, there is more to be done.

These last few days in France have been marked by the Islamophobia of both the government and the extreme right. Macron and Castaner encouraged the denunciation of Muslims on the pretext of fighting terrorism; Blanquer sought to ban women wearing the veil from accompanying children on school trips; and an elected official of RN (Rassemblement National, Marien Le Pen’s far-right political party) subjected a Muslim woman to a sexist and islamophobic attack.

If we speak of an islamophobic offensive, it is to underscore the reality that islamophobia and racism have always been at the heart of the state and of the French Republic. The RN member’s attack on a woman who wore a headscarf while accompanying children on a school trip is in line with government policies and with the racist, islamophobic, and sexist ideology that has been distilled for years by various political forces and relayed by the media. It is an ideology that aims, in the name of secularism and the principles of the Republic, to stigmatize, violate, exclude, and persecute the Muslim population.

As Françoise Vergès, author of A Decolonial Feminism, recalled in a Facebook post, the “unveiling” of Muslim women was originally a tactic used by the French military against the people of territories colonized by France. The colonizers claimed they were acting in the defense of women’s rights and the “civilizing” values of French secular society, and today—while continuing to oppress and exploit its former colonies—the French state offers the same spurious justification for persecuting Muslims on its own soil. 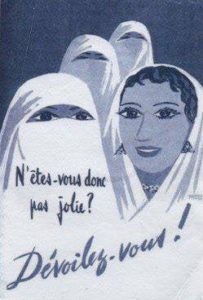 Following the declarations of Castaner and Blanquer, there has been an increase in Islamophobia and racism. It is now not just the veil, but a whole set of physical signifiers, along with a variety of cultural and religious practices, that are viewed as indicators of “Islamic radicalization” and subject to sanctions. We are witnessing the culmination of many years’ efforts, ostensibly in the name of the principles of secularism and neutrality, to use cultural differences, such as the wearing of the veil, as a pretext for controlling, tracking, and condemning all Muslims.

This very real incitement to hatred of Muslims can only have terrible consequences in the daily lives of a whole section of the population. Muslim women have been victims of exclusion, humiliation, aggression, and dismissal for years, and even more so today because of the laws enacted to ban the wearing of headscarves in schools and the niqab and burqa in public spaces. This is aggravated by continued propaganda claiming that Muslim women are submissive, living under the yoke of their fathers and husbands. Propaganda additionally portrays them as disinclined to work, unwilling to integrate, and as potential terrorists.

The consequence is that Muslims are discriminated against in their personal lives, in their studies, in their job applications, and at work, where Muslim women are threatened with termination if they wear the veil and refuse to remove it. In these cases of dismissal, the courts consider that “restrictions on religious freedom must be justified by the nature of the work that person is responsible for performing.” Under the pretext of professionalism, the state adopts a “principle of neutrality” that allows employees to be dismissed from public companies. The courts have since recommended that private companies also include this principle of neutrality in their work rules in order to better justify dismissals. These are racist exclusions, based on legal arguments, of Muslim women from a range of occupations; this exclusion consciously directs Muslim women to positions in which they will be “invisible.” This also leads directly to unemployment.

This is, of course, deeply hypocritical. The wearing of a veil seems never to bother the state or private employers when they are looking for low-paid labor in such sectors as cleaning or personal care. Nor, until quite recently, did Blanquer’s national education system hesitate to accept unpaid labor, in the form of volunteer support on school trips, from women wearing the veil.

The following statement by a Muslim mother, interviewed following the attack on Fatima E. by the right wing MP, illustrates this perfectly: “These outings are something we can do with our children, since we are not allowed to work with a veil… I am a computer technician and no one wanted to hire me with my veil. On the one hand, they say that we are not involved, and when we want to get involved, they prevent us from doing so because we are veiled…” The government does not care about the oppression of Muslim women. It actively contributes to their marginalization, their precariousness, their isolation, and their exposure to violence.

“The problem of schools is not veiled women, it’s enrollments,” a Muslim woman said yesterday on the radio network, France Inter.

Indeed, while a large majority of the population is demanding change, the government has chosen to play the card of racism and Islamophobia, agitating fear by raising the specter of Islamic radicalization. While teachers are demanding accountability after the suicide of Christine Renon—a headmistress of a nursery school who committed suicide after leaving a letter describing her working conditions—Minister Blanquer is polarizing society by attacking  veiled school-trip companions and even by inciting people to “report” children for signs of radicalization.

As feminists, Marxists, and revolutionaries, we denounce the hypocrisy of governments, and of all ministers, including Marlène Schiappa (Minister for Women’s Rights). We also denounce the hypocrisy of leftist political organisations and collectives that claim to fight all violence against women while actually supporting state racism. Indeed, this contributes to the division and weakening of the women who are on our side.

Islamophobia and racism are acts of violence against Muslim women. State racism persecutes Muslims in France and serves to justify deadly military interventions against hundreds of thousands of women around the world. That is why the struggle for women’s emancipation is a political struggle against those capitalists, sexists, racists, and imperialists who rule and dictate today’s society. These are the people responsible for the exploitation and oppression of the majority of women and people in the world.

We demand the abolition of all islamophobic and racist laws, the opening of borders and freedom of movement, and the right of women to control their own bodies, to freely choose their clothing, their beliefs, their lives, and their sexuality. We demand complete independence from the imperialist state and its institutions!

First published on October 17 in French on Révolution Permanente.