Fighting the Megatowers: A Tale of Two Bridges

A group of neighbors in New York City is going up against the courts and big real estate interests to stop the construction of four luxury towers planned for the Lower East Side waterfront. Their efforts have successfully blocked construction. For now. 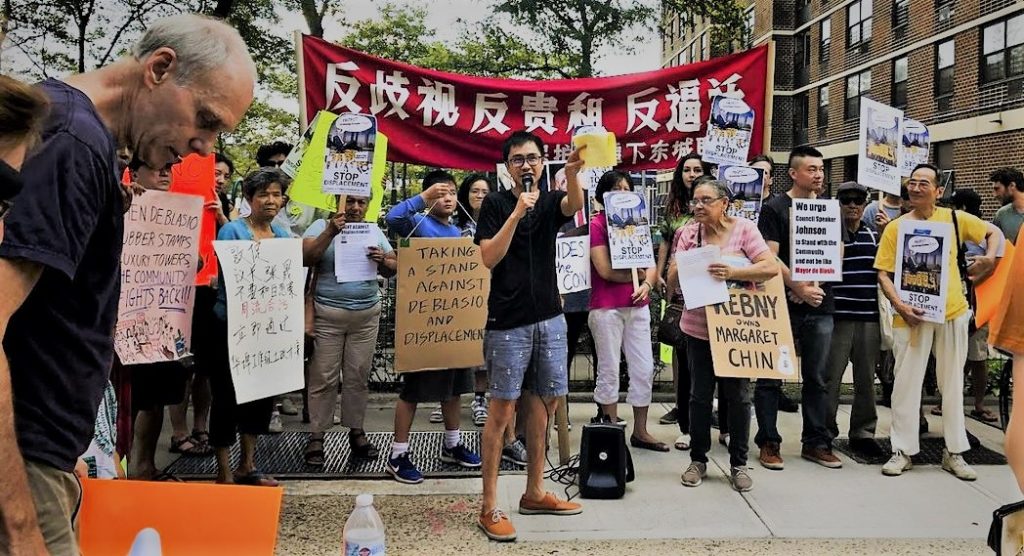 Last December, despite tremendous outcry from the community, the New York City Planning Commission voted to approve the building of four luxury skyscrapers ranging in size from 62 to 77 stories tall and containing nearly three thousand apartments. These high-rise buildings would occupy an approximate two-block area in a flood zone in the Two Bridges Neighborhood of Lower Manhattan, a quiet corner nestled between Chinatown and the Lower East Side. It is also one of the last affordable areas in Manhattan and home to many low income families.

If built, these towers would dramatically alter the neighborhood of predominantly low-rise buildings, small businesses, and public housing, and would harm the health and livelihoods of the community of color that lives and works there. Yet real estate developers saw an opportunity for profits in the parking area, playground, and open airspace of this neighborhood. The architects even designed one tower that cantilevers over a low income senior housing center. This plan violates a thirty-two-year-old deed restriction requiring that this land be used “in perpetuity for housing for elderly and handicapped persons of low income [as defined under federal law].”

The devastation this construction would cause is not limited to the years of drilling and noise, clouds of dust and debris, overburdened sewers and power grid, and the unstable foundation that is threatened by rising sea levels. The Two Bridges community has already suffered the toxic fallout from 9/11 and continue to have respiratory problems to this day; construction of this magnitude would cause them further harm, as many residents testified during the Environmental Impact hearing in 2018. The influx of luxury units will also lead to rising land values and real estate taxes, leading landlords of the surrounding area to raise their rents and force tenants from their homes. While developers promise to include a paltry number of “affordable” units that are actually unaffordable to the majority of people in the area, they only do so in order to receive massive tax credits from the City to finance their luxury construction. A project such as this is in no way a solution to a lack of affordable housing — in fact it creates a net decrease in affordability due to the displacement it causes in the neighborhood.

In March of 2019, the Lower East Side Organized Neighbors and Coalition to Protect Chinatown and the Lower East Side along with the community filed a lawsuit against the City of New York to permanently stop the Two Bridges development as it violates the zoning law of the area in which the towers have been proposed. The law bars any building that harms residents’ access to light, air, and neighborhood character.

The community has not only been advocating to block the towers, but also to pass a community-led rezoning plan called the Chinatown Working Group Rezoning plan. This plan, created by over 60 community groups, would limit the heights and affordability requirements of new buildings, and require that all housing built on public housing/New York City Housing Authority (NYCHA) land be permanently affordable to low-income residents, among other reforms that would protect the community in Chinatown and the Lower East Side. In 2008, the City gave the whiter, middle class East Village a similar protection and excluded Chinatown and the Lower East Side, home to predominantly Latino, Asian, and Black residents and workers. This left Chinatown and LES vulnerable to developments such as the towers proposed in Two Bridges.

In February 2020, Judge Arthur Engoron ruled in favor of the Coalition to Protect Chinatown and the LES, temporarily halting construction of the towers designed by SHoP Architects, Perkins Eastman, and Handel Architects.

Two additional lawsuits were brought forward, including a joint argument from the City Council, namely District 1 Councilwoman Margaret Chin, and Manhattan Borough President Gale Brewer to put the towers through the Uniform Land Use Review Procedure (ULURP), a process which would give City Council voting power on the project. The judge also ruled in favor of the City Council, greenlighting the ULURP process. Though the towers blatantly violate the zoning law, Chin has stated she planned to use ULURP to greenlight the project.

Despite significant local opposition, the ULURP process is often used to rubber stamp developer-led proposals. This recently occurred in the NYU superblock expansion under the leadership of Chin, the Bedford Union Armory, Hudson Yards, and many others.

This past August, the Appeals Court ruled against the City Council, overturning the ULURP decision, a loss for Councilwoman Chin. While the Coalition to Protect Chinatown awaits the appellate court proceedings on their case, the injunction against the towers remains in effect.

The law is a tool that people can use to assert themselves, but the courts will typically rule in favor of governing bodies and the capitalist interests they protect without significant pressure from “extralegal” movements and organizing. In turn, the deeper strength in the Two Bridges fight is connecting the lawsuit to organizing among neighbors. Through outreach and meetings in buildings, flyering on streets and in subways, rallies, research, marches, and town halls, the community exposed the damage the development would cause, ignited people’s anger at the fact that our elected officials/City government were clamoring to usher in illegal towers, and united people of all backgrounds around the common goal of protecting the whole community — not merely a slice such as Two Bridges — from over-development.

It is critical to understand who controls the purse strings for most development projects, and who sets the real estate agenda for New York City. It is the City: without the blessing of government and certain elected officials, most non-As of Right construction projects would not see the light of day. But under capitalism, the state exists to ensure and expand capitalist profits, such as those of big real estate companies, at the expense of working people who must fight to keep their homes and for the basic right to housing. The Two Bridges fight involved holding the City and particularly Mayor de Blasio and Councilwoman Chin, accountable for their racist displacement agenda, and connecting with other neighborhoods facing the same threat. From the Lower East Side to Inwood to Sunset Park, working people of all races are coming together to fight for their future in New York and their neighborhoods that have been hubs of immigrant life and community for centuries.

Residents of every borough must continue to come together and demand that the City government stop giving tax subsidies to luxury developers, tethering “affordable” units to luxury building plans, defending predatory landlords, and displacing working-class tenants and homeowners. We must demand housing that is truly affordable and fight to ensure that communities can remain and thrive in the neighborhoods they’ve built. No towers, no compromise!