The state of New York is firing thousands of unvaccinated health care workers and replacing them with members of the National Guard. While we support all workers being vaccinated, this is a clear attack coordinated by the bosses and the State against the working class. 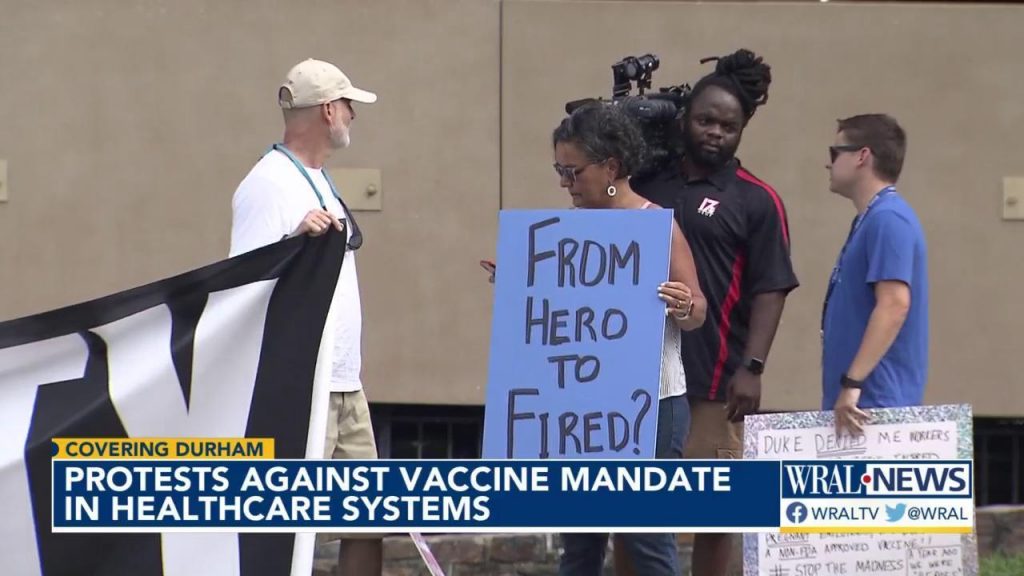 On Monday, the state of New York’s vaccine mandate for healthcare workers went into effect, putting unvaccinated healthcare workers throughout the state at risk of either losing their jobs or being forced to take unpaid leave. This mandate is not just limited to staff such as doctors and nurses, but extends to all workers in the healthcare system, including food service workers, administrators, and janitorial workers. Hospitals throughout the state have already started firing workers from their healthcare systems. As if firing workers was not enough, the state has also determined that workers who are fired on the grounds of vaccine refusal will not qualify for unemployment unless they can provide a doctor’s excuse. These firings are likely just an opening salvo from the state and the bosses for further attacks on the working class.

These are the workers who wore trash bags as PPE and fought the pandemic during its absolute height in New York. And now these “healthcare heroes” are being thrown to the street without so much as unemployment benefits. While we support healthcare workers being vaccinated, we must stand strongly against the firings of workers who put their lives on the line throughout the pandemic. Firing thousands is an attack on all workers and opens the way for further state attacks on the working class.

As of late last week, New York’s public sector was estimated to have over 5000 unvaccinated workers, which accounts for around 10 percent of the workforce of 43,000. Prior to Monday, some 72,000 workers have yet to be fully vaccinated, accounting for 16 percent of the state’s hospital staff. A late surge in vaccinations boosted the number of healthcare workers that received at least one vaccine dose to 92 percent.

These firings are happening as health systems in dire straits due to short staffing. Efforts to drive down staffing to pre-pandemic levels to cut costs combined with the effect of workers leaving the workforce or retiring after fighting the pandemic for 18 months now have resulted in having insufficient staff to provide adequate patient care. Besides the direct effects on those who are fired, these measures will also further burden overworked healthcare workers and lead to poorer patient care as Covid-19 cases rise. Hospitals throughout the state may have to cut services. For example, according to Reuters, Erie County Medical Center in Buffalo, NY “stopped accepting intensive-care patients from other hospitals as it prepares to fire hundreds of unvaccinated employees.” As a healthcare worker in Brooklyn said to Left Voice:  “We are set to lose over 40 out of 350 registered nurses. We are livid because the workload that was already crazy will only get worse. Units may have to close. People are going to die because of this mandate.”

Now New York Governor Kathy Hochul is publicly considering calling the National Guard and out of state healthcare workers to make up for the shortages. We cannot normalize or accept the National Guard as an adequate substitute for healthcare workers. These firings are not limited to New York. On Monday a North Carolina based hospital system, Novant Health, fired 175 workers in a mass termination due to the vaccine mandate.

These firings are an insult to the health care workers who risked their lives, in unsafe conditions, during the pandemic. It is an insult to the health care workers who are still risking their lives fighting the pandemic in unsafe working conditions. When we asked for supplies and funding, the bosses were silent. As we fought the pandemic during its peaks, begging for additional PPE and safety standards, bosses were silent. When we asked for additional staffing to battle the influx of patients, bosses had no solutions to offer. But now, suddenly, touting the idea that vaccines are a magic bullet against the virus, the bosses leap into action, firing thousands and replacing them with members of the military.

They do this at the same time that children are forced back into crowded schools, which still do not have adequate ventilation, only ensuring the continued spread of the highly contagious delta variant. In Mississippi, for example, over 20,000 students had to quarantine after the first week of school while more than 4,500 students tested positive for the virus just last week. This is a clear example that the main interest is not to solve the health crisis but to go back to business.

They do this at the same time that the government refuses to drastically expand nonpharmacological public health measures such testing, tracing, and isolation (Tetris measures, which should be used alongside vaccinations). The vaccine is not an exclusive solution to stop the spread, but it’s the only one the capitalists seem interested in. Capitalist governments claim to want to end the pandemic, but continue to refuse to institute widespread measures needed to truly curb the spread.

These firings show the true nature of the conditional and performative support for essential workers last year. Capitalist support of essential workers only lasts until they can fire workers to restore profit margins. Now, thousands of health care workers are or will be without a job, unable to collect unemployment, and are unvaccinated — all of which surely cannot be for  the greater public good. The healthcare workers weren’t fired to keep the public safe; they were fired as a warning to all other workers. These firings aren’t about keeping people safe, and instead are about re-opening the economy as quickly as possible, regardless of if it is safe to or not.

While, of course, all healthcare workers should be vaccinated, the solution to unvaccinated health care workers isn’t to unceremoniously throw them out. Instead, health care workers and patients themselves must be able to collectively decide on safety measures. We can’t trust the state or the bosses to do this, because as we have seen time and time again, they will throw our lives and safety away without a second thought if it helps them generate more capital.

We condemn these firings for what they are: attacks on the working class. They will not lead to additional healthcare workers getting vaccinated and will instead lead to staffing shortages affecting already overburdened healthcare workers. This will lead not only to poorer patient care, but also to further burnout of healthcare workers who continue to struggle to provide care in a healthcare system whose primary objective is maximizing profit above all else.

Unions must reject these terminations without hesitancy and put forward a fighting program with in-depth solutions to the health crisis. Such a program would include the fight for the centralization of all available public and private resources, controlled by the workers to face this pandemic, and with the perspective of building a free single public health system.

While the capitalists are pushing for a full reopening, it must be the working class and the public that determines whether it is safe for businesses and schools to reopen. Workers, along with the community, should dictate policies on workplace safety, with input from frontline healthcare workers when possible. Shutdowns should similarly be determined by the working class, and full pay and benefits should be provided by capitalists if workplaces and educational institutions need to be shut down.