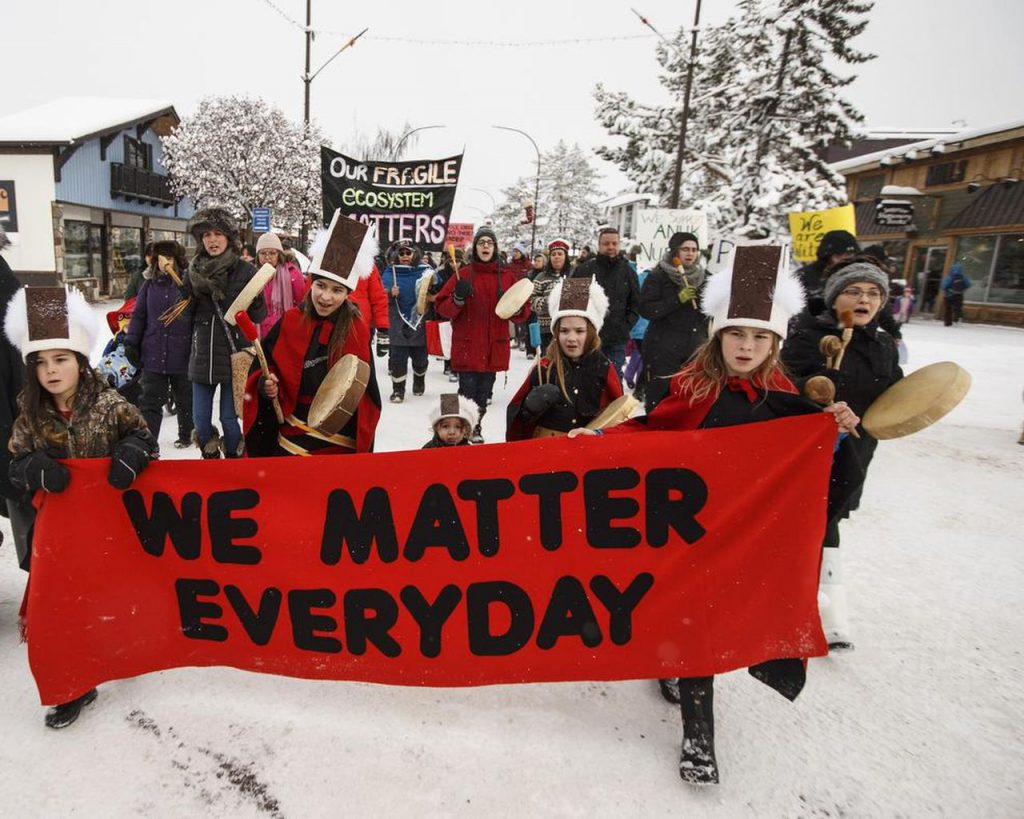 Thanksgiving can be complicated for Leftists in the United States. Though the holiday is an opportunity to spend time with family and community, it also represents a continued whitewashing of this country’s genocide of Native Americans.

As Leftists, we must stand in solidarity with Indigenous peoples and reject the erasure of the historic oppression against their communities. But violence against Indigenous peoples is not just historical — it is ongoing. Whether or not we choose to celebrate this holiday, we should use the day as an opportunity to amplify some of the current ways that Indigenous communities around the world are waging brave struggle against forces of capital that threaten these communities.

Here we present five Indigenous struggles that the Left can support right now.

1. Indigenous communities in the U.S. fight the contamination of their land

In Minnesota, Indigenous people and environmental activists are resisting the construction of the Line 3 pipeline, which would carry 760,000 gallons of tar sands oil daily from Alberta, Canada into the United States, passing through native territories. Oil from tar sands is particularly dirty, and spills — such as the one that occurred in Kalamazoo in 2010 — are disastrous for local wildlife, ecosystems, and water sources. Indigenous and environmental activists have led various civil disobedience actions, including blocking roads and chaining themselves to drills, to try to stop the construction process.

The multinational that operates Line 3 also oversees the Line 5 pipeline, which native activists and their supporters in Michigan are fighting to shut down. Despite an order from Michigan’s governor for its closure, Enbridge continues to operate the pipeline. President Biden, who claimed to oppose pipelines during the campaign, has so far refused to step in to close either the Line 3 or Line 5 pipelines, continuing to put the interests of oil companies before the needs of Indigenous people and the planet.

The military has occupied Guam and Okinawa since WWII, building up bases which threaten the Indigenous land and regularly subject the Idigenous people to harassment and violence. In Okinawa, this has included several incidents of rape of Indigenous women by U.S. military personnel, a persistant issue for the native Okinawans. The U.S. military has used this land for dumping toxic waste and weapons testing, both of which have had severe health consequences for the local populations. Both the CHamoru people and the Ryūkyūan people are leading resistance movements to force the U.S. military off their land. However, the military has used deceit, intimidation, and their alliances with local governments to maintain their occupations.

The Canadian government is escalating repression of Indigenous peoples who are defending their land from construction of the Coastal GasLink pipeline, a gas project which would run through 416 miles of British Columbia. The Wet’suwet’en people, a First Nations people, have been bravely resisting the pipeline.

Since 2018, the Wet’suwet’en people have delayed the construction of the pipeline by setting up camps along a road that runs through their unceded territory and is essential to construction. The state has responded by sending Royal Canadian Mounted Police (RCMP) to attack the camps. On November 18, an RCMP unit arrested 15 people at the Gidimt’en camp, including two journalists. There have been demonstrations throughout Canada showing solidarity with the Wet’suwet’en people, including a two-week blockade of major Canadian railway systems last year.

5. Mapuche people in Argentina and Chile

Indigenous communities in Argentina and Chile are in a fierce struggle to recover their ancestral lands. Not only have their legitimate demands to the land been rejected but the state and landowners have unleashed a campaign of violence and intimidation in response.

Earlier this week, vigilantes murdered Elías Garay, a Mapuche activist, in the province of Río Negro, Argentina. Indigenous people, who have been resisting entirely peacefully, have been facing repression by both the provincial police forces and military forces sent by the federal government. Mapuche communities in the region are also denouncing the increased mining activity, overseen by the administration of Alberto Fernández, which will only lead to the further contamination of their waters and lands.

In Chile, the government of Sebastian Piñera has declared a State of Constitutional Exception and deployed tanks, military vehicles, and 2,000 heavily armed troops to indigenous regions of the country in order to quell indigenous rebellions. Earlier this month, Chilean forces killed Yordan Llempi Machacan, a 23-year-old member of the Mapuche community in Wallmapu. Another 59 activists have been arrested while exercising their legal right to demonstrate. The state had also impeded the delivery of food and basic goods to the region.

Violence against Indigenous people is not a thing of the past — it is ongoing within the United States and throughout the world, because of capitalism’s need to exploit land, natural resources, and human labor. This Thanksgiving, the Left can honor Indigenous resistance by highlighting their struggles, and connecting them to a broader struggle against capitalism and exploitation