Florida’s “Don’t Say Gay” bill would make it illegal to discuss gender and sexuality in K–12 schools. We need a unified, national movement against these right-wing attacks. 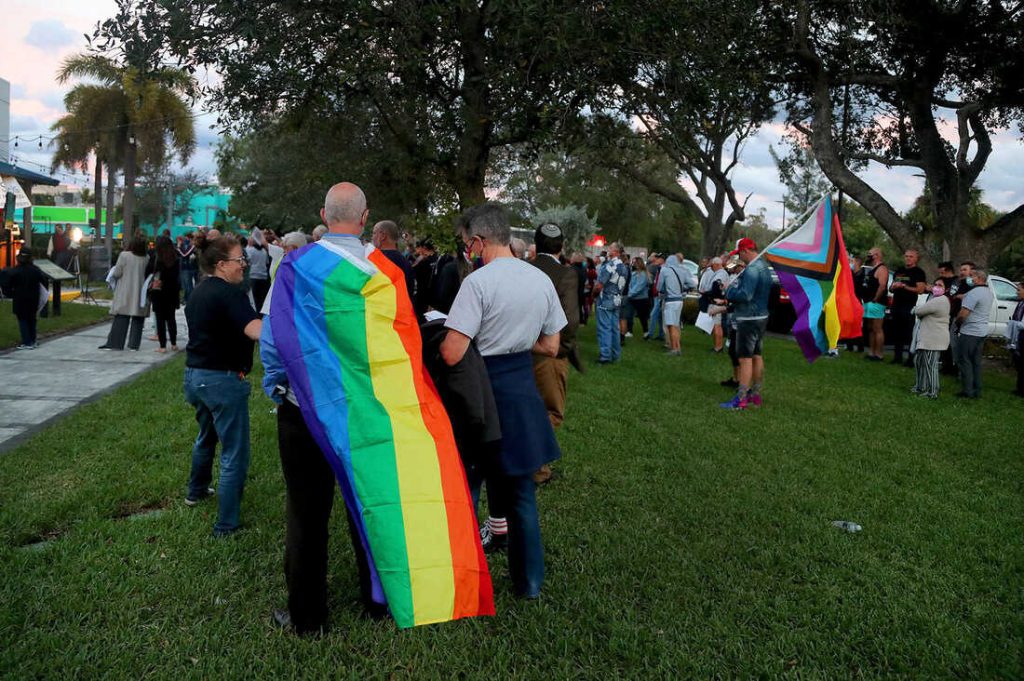 It may become illegal to discuss gender or sexuality in K–12 schools in Florida. Yet another draconian anti-queer bill is making its way through the state’s legislature. If passed, it would ban all discussions of gender and sexuality — or, to be more exact, all discussions of non-cis genders and queer sexualities, since lessons on gender and sexuality like those in Jane Eyre and Pride and Prejudice would presumably continue to be taught. Deeming queer sexuality not “age or developmentally appropriate” for K–12 students, this bill is an attack not only on queer kids but also on queer (and non-queer) educators. Yet again, state governments are attacking both queer children and educators’ freedom in one fell swoop.

Formally (and euphemistically) known as the Parental Rights in Education bill, the legislation was originally put forward in January and recently received the support of Florida’s Republican governor, Ron DeSantis. It doesn’t specify how “age or developmentally appropriate material” is defined or which subjects it could apply to, meaning that topics from literature to history to even health education could be erased from curricula. The bill would also allow parents to sue schools that they perceive to be violating the law. If passed by the Florida legislature and signed by DeSantis, the law would go into effect in July.

It goes without saying that queer children and youth already live disproportionately precarious lives and are at increased risk of harm. They are 120 percent more likely to at some point be unhoused compared to their non-LGBTQ+ peers and four times as likely to attempt suicide; over 87 percent of queer youth have experienced verbal or physical harassment and abuse due to their gender or sexuality. A key factor in lessening these devastating rates is having supportive adults at home and in the classroom, in addition to access to health and social care resources. Thus, the consequences of this law could be deadly for LGBTQ+ youth.

The dangers of this bill are not just limited to the impacts on queer children. By deeming any discussions of gender or sexuality inappropriate for the classroom, the law ties teachers’ hands. Theoretically, under this law, English teachers couldn’t talk about queer subtexts in Shakespeare, history teachers wouldn’t be able to talk about the different ways gender and sexuality have shifted in different historical eras, and health teachers wouldn’t be allowed to even mention LGBTQ+ people. This is to say nothing of queer and trans teachers who would, presumably, be discouraged from even having pictures of their families on their desks for fear of facing legal backlash for discussing “developmentally inappropriate” topics.

This “don’t say gay” bill is just the latest in a long line of attacks in the past year against queer children and educators. Across the country, schools are banning transgender youth from participating in sports and using their preferred bathrooms. Tennessee, Alabama, and Arizona legislatures have even debated bans on providing gender-affirming health care to minors, and implementing fines for health care providers who do so.

Behind these attacks is the Republican Party’s new culture war strategy, which has singled out schools as a place of conflict. Condemnation of critical race theory and the existence of trans students has driven a lot of Republican rhetoric in recent elections, especially as the party embraces the Far Right and makes concessions to the most reactionary elements of this base. Republicans are staunch enemies of the queer community, and the Florida bill, and others like it, are surely a prologue to the open bigotry we will see in the 2022 midterms.

These attacks on schools and LGBTQ+ youth are especially outrageous given that the Democrats — the supposed allies of the queer community — control the federal government. But, as with many of the advances of the Right, the Democrats seem uninterested in doing anything to resist them, other than offering tepid statements of support. President Biden criticized the bill in a tweet, saying, “I have your back, and my administration will continue to fight for the protections and safety you deserve.” However, as Left Voice writer Olivia Wood recently pointed out, for all his pro-LGBTQ+ statements, Biden’s actual record on queer rights and protections has been woefully inadequate, strewn with broken promises.

Instead of taking meaningful action to protect LGBTQ+ people and youth, the Democrats’ unified strategy — a strategy that even progressives like Alexandria Ocasio-Cortez, Rashida Tlaib, and Bernie Sanders have bought into — is to tell people to go to the polls. This an extension of the “resistance via election” framework that so successfully caged the anti-Trump and Black Lives Matter movements within the Democratic Party and demobilized them, removing them as a threat. The same process has happened to the queer movement. Where once we took the streets and occupied cathedrals, now queer activism seems limited to a few largely symbolic marches and pleas to the Democrats. This is an insufficient and doomed strategy. To protect ourselves and future generations of queer people, we must reject this strategy and instead embrace the radicalism of our ancestors. We didn’t win what we have by playing within the boundaries of the Democratic Party.

These bills, however, offer a unique opportunity to unite two different struggles into one unified one: the queer and labor movements. In the last decade or so, teachers have shown themselves on several occasions to be in the vanguard of labor struggles. From the strike wave of 2018 to the recent struggle with the Chicago Teachers Union against unsafe reopenings, teachers have shown that they are willing to stand up and fight. This energy must be connected with the queer movement to create a unified movement against these attacks. As Emma Lee, a New York City high school teacher and Left Voice member, writes,

We have to organize within our unions to demand that our teachers’ unions connect with the LGBTQ+ community and coordinate mobilizations around the country. We have to organize to oppose these laws, protect trans students, and safeguard the academic freedom to teach accurate information about gender and race. When we are organized, we can refuse to work each time a transphobic bill is introduced. By mobilizing our ranks, we can strike every time a trans person is attacked. Together we can build a mass movement for trans rights.

Tatiana Cozzarelli, also a New York City educator and Left Voice member, went further, pointing out that this movement must be national in character, rather than — as it currently exists — localized just to the states and districts where there are the most attacks. She writes,

Teachers’ unions must put up this fight, for teachers, for students and for the future of the education system. The American Federation of Teachers and the National Education Association represent millions of teachers. They loudly proclaimed that Black Lives Matter last year during the uprising. But now, they must step up. The AFT and the NEA — both national education unions — must put up a national fight, uniting with LGBTQ+ rights groups and other community organizations that address immigrants’ rights, racism, and Black liberation. These are issues that unite us and it’s time to organize in our workplaces and it’s time to take the streets. The right wingers who attend school board meetings are minuscule compared to the united power of teachers unions and community organizations invested in trans rights and the teaching of history in school. It’s time to show it.

Queer rights and labor rights are under attack. To fight the advances of far-right forces and the Republican Party that is embracing them, we must combine the different “fronts” of the attacks into a unified movement with crushing solidarity and organization. Now is the time to call on our unions and community organizations to mobilize, and to get organized and get radical. Lives depend on it.