For a United Front Against Racism

The current uprising against police terror is winning important concessions. But to beat racism, the working class will need to come to the fore. Workers need to mobilize around a unified set of demands and coordinate a national struggle with the radical masses, using working class methods. 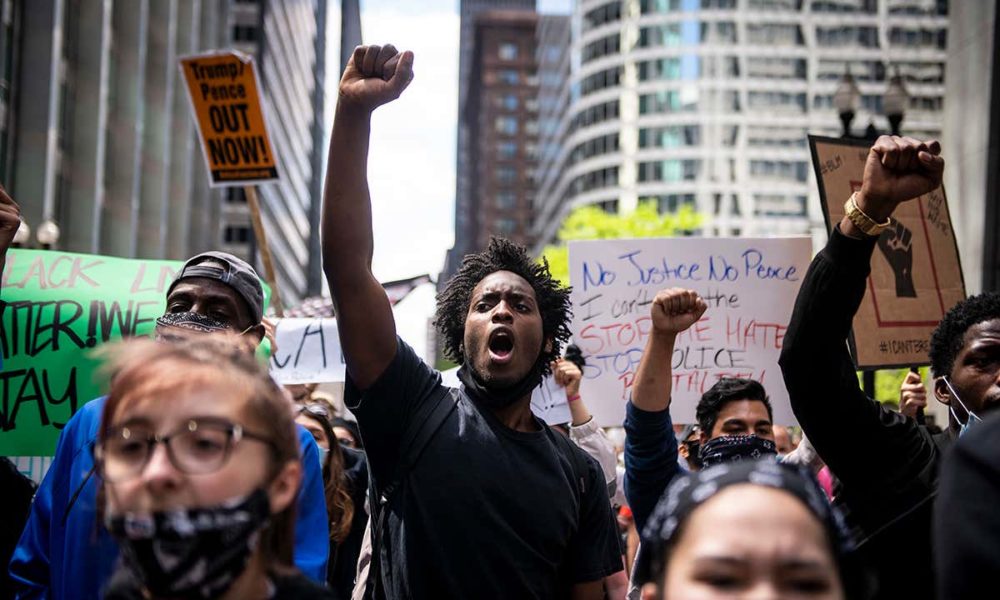 The current uprising against racist police brutality has spread like wildfire and now rages across the world. Instead of petering out, hundreds of thousands across the globe continue to take to the streets everyday, demanding an end to police violence. As the movement has grown, so has the scope of its demands. Firing and arresting a few killer cops is no longer enough — the protesters want the whole racist system to go! In recent weeks, this has consolidated around one central demand: the call to defund the police.

The murder of George Floyd, like that of Breonna Taylor or Ahmaud Arbery or Tony McDade, is only a symptom of a larger problem. Racism is as American as apple pie. The current uprising against police violence, especially, comes at the heels of the ongoing coronavirus pandemic that has disproportionately affected people of color. Persistent racial disparities in healthcare, employment, housing, and income have resulted in worse physical and economic outcomes for Black people. More Black people have had to work low-wage jobs during the pandemic, been exposed to the virus, fallen sick, or lost their jobs. Floyd himself had lost his job as a restaurant bouncer due to the stay-at-home orders in Minnesota. As his autopsy report showed, he also tested positive for Covid-19. Now, his murder has sparked a new moment of reckoning.

The masses that are out protesting are the generations that came of age in the era of the Great Recession, the Obama administration, and the Ferguson protests. They have directly experienced failed attempts to reform the capitalist state to achieve racial equality. They’ve experienced the false promise of reforms that came after the first wave of Black Lives Matter protests, as the ruling class took their anger and transformed it into political posturing. They’ve seen the failures of body cameras and chokehold bans, as police officers continue to harass, attack, and kill Black people with impunity.

Protests over George Floyd’s death have made people the world over not only rise up against racism, but also question the role of the police. The police, who can trace their lineage all the way back to slave patrols out to catch runaway slaves, or to strike-breakers keeping the industrial proletariat in line, continue to function as the armed wing of the capitalist state. It is abundantly clear that the police aren’t here to “protect and serve” people — they are defenders of private property, designed to keep the masses in line. As the protests have escalated, the police have maced, tear gassed, beaten up, injured, and killed protesters with bipartisan support. City councils across the country are now proposing austerity budgets, showing that the state would much sooner cut access to healthcare, housing, and education than reckon with the inflated budgets of police departments.

Under the immense pressures of the movement, however, the political class has granted some tepid concessions. Some cities have made miniscule cuts to police budgets, while others have passed bans on chokeholds or taken steps to end “qualified immunity.” Killer cops have been fired, arrested, and charged, although none have been convicted yet. Trump, who hasn’t wasted any opportunity to demonize the protesters, was also compelled to address the uprising with an (symbolic) executive order on police oversight.

Despite the posturing and the meager concessions, it is clear that neither of the two parties of the establishment are our friends. While Donald Trump and most Republicans are reactionary bigots who continue to dog-whistle their racist, reactionary base, no amount of kente cloth can cloak the complicity of Democrats in fostering police violence. The Democratic Party — the graveyard of social movements — continues to co-opt and contain the movement, promising change that never comes (and one that they are incapable of delivering).

As the uprising moves into its next phase, it is crucial that the movement reject the misleadership of ruling-class politicians. In order to win broad demands, but also to defend ourselves against capitalist attacks and co-optation attempts, socialists and working people need to organize in a united front.

Why the United Front?

As we have seen throughout the coronavirus pandemic, the capitalist state is incapable of taking care of us. While politicians across the world dragged their feet in order to protect profits, the working class rose to the occasion, demanding better conditions for themselves and their communities, and showing that they can run society far better than the capitalists.

Even in the midst of the current uprising, by standing up against the police and for the movement, workers have shown their immense power. When the police wanted them to transport protesters who had been arrested, bus drivers in Minneapolis and New York City refused to drive. Teachers, along with students and parents, have organized and demanded to have cops kicked out of public schools. Longshore workers from the ILWU went on strike on Juneteenth in solidarity with the uprising, bringing all 29 ports across the West Coast to a grinding halt.

While these actions have been noteworthy, workers and the masses need to build a much larger coalition in order to win broader demands. By leveraging their strategic position within capitalist society, workers can strike at the very heart of this oppressive machine — and win.

According to the Payday Report, there have been 500 strikes over the last three weeks. On Juneteenth, along with the ILWU, hundreds of workplaces went on strike. The growth of wildcat strikes throughout the pandemic was indicative of the immense dissatisfaction among rank-and-file workers. In addition to fighting for better conditions, the organized working class — over 14 million workers in the U.S., occupying strategic positions in transport, logistics, healthcare, sanitation, education and manufacturing — can play a decisive role in the fight against racist oppression, as this oppression deeply affects many of their own ranks. Labor unions and federations are uniquely positioned to call for such fronts and be a central part of them, especially when they are under the pressure of their rank-and-file.

To fight back against police terror, working people and revolutionaries need to form the broadest class unity. A united front of this nature would not only include workers in both the organized and unorganized sectors, but also the millions who are now unemployed, as well as social and political groups and organizations that fight for the interests of the working class and oppressed. Such a coalition, most importantly, has no place for bourgeois parties like the Democratic Party that pretend to be on the side of working people but are, in reality, representatives of the capitalist class.

Workers need to mobilize around a unified set of demands and coordinate a national struggle against racism and police brutality, using working-class methods such as strikes, roadblocks, and pickets. This will not only help fend off the assault on the rights and safety of Black people, but will also give the working class invaluable experience in solidarity and fighting for their own program.

How Should Revolutionaries Intervene?

It is imperative that socialists push for this perspective in their unions and organizations. Such a coalition can and will include a wide variety of reformists who, in the face of the continued uprising, will seek “peace” and equilibrium by trying to contain the movement. It is our task as revolutionaries to fight against such tendencies. Instead, socialists need to speak directly to those engaged in struggle, show solidarity with the most radical sectors and, through unity in action, demonstrate that we are committed to taking the fight against oppression to the very end. As Leon Trotsky said,

The reformists dread the revolutionary potential of the mass movement; their beloved arena is the parliamentary tribune, the trade-union bureaus, the arbitration boards, the ministerial antechambers. On the contrary, we are, apart from all other considerations, interested in dragging the reformists from their asylums and placing them alongside ourselves before the eyes of the struggling masses.

Such a tactic creates an opening for socialists to break the masses from bourgeois and reformist misleaders. For socialists, the struggle for a united front has to go along with a push for democratic structures of self-organization, like assemblies, workplace and community delegates, and workers’ self defense. Assemblies, especially those tied to workplaces, provide a place for working people to debate and discuss not only the political goals of such a movement, but also the methods to achieving those goals using their strategic position within capitalist production. By employing and agitating for these tactics, revolutionaries can put their ideas alongside those of reformists and clearly show the limits of reformism to the broad masses, enabling them to win over the vanguard of militant workers to their ranks. Among the working class, especially, such tactics can expose the duplicity of the union bureaucracy — who are agents of the ruling class — and force them to align themselves with the movement of the rank-and-file masses. By engaging and advocating for mass struggle, socialists will be able to radicalize workers and open up opportunities for new leadership that can bring large sectors of workers and radical youth closer to revolutionary socialism. To quote from the resolution of Fourth Congress of the Communist International,

The united front tactic is simply an initiative whereby the Communists propose to join with all workers belonging to other parties and groups and all unaligned workers in a common struggle to defend the immediate, basic interests of the working class against the bourgeoisie. Every action, for even the most trivial everyday demand, can lead to revolutionary awareness and revolutionary education; it is the experience of struggle that will convince workers of the inevitability of revolution and the historic importance of Communism.

The current pandemic and the uprising against police terror has rapidly transformed the situation in the U.S. By striking with a united front, working people and the radical youth can fight against this racist capitalist system and for their demands with militant unity and solidarity. While reformist and bourgeois leaders continue to try and contain the uprising and move it off the streets, the united front tactic can become a decisive move that can rapidly shift the consciousness of the masses.