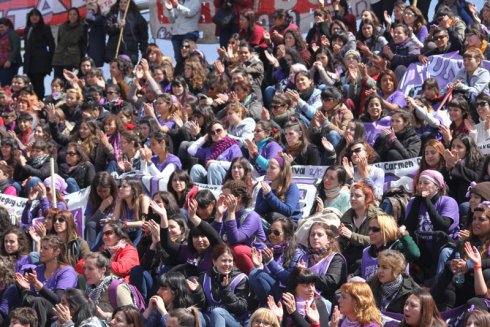 At the end of the conference, Left Front (FIT) members, Myriam Bregman, a member of parliament and Vice Presidential candidate, and Andrea D’Atri, ParlaSur candidate, addressed a crowd of women who participated in the Encuentro.

We are immensely proud of what we’ve accomplished at this Encuentro (Women’s National Meeting). I want to congratulate all of you. From each one of you who put forth a class based political perspective at the workshops to each one of you who joined the Frente de Izquierda (Left Front) at the demonstration.
Part of our fight is to win more Congressional seats by people who truly champion women’s rights. We saw this at the Presidential Debate, where my running mate, Nicolas del Caño was the only candidate who spoke out for the right to a free, legal and safe abortions. No other candidate touched this topic; the right wing candidates didn’t say a word about it and nor the center-left candidates. It’s really important to keep this fight alive in the streets, and express this challenge on October 25 (national election).

If the Frente de Izquierda (Left Front) has a good showing in the election, it will be a clear political message: We, women, want to fight for our rights! We support candidates who don’t hide women’s demands but, on the contrary, put our agenda front and center. Your help is really important for us; we need your help in every province and city of Argentina. Join our struggle; join the PTS and the Frente de Izquierda!

This is the first time Kirchnerism (Cristina Kircher is the Presient of Argentina) brought a big contingent to the Encuentro, especially compared to the numbers they brought in previous years. Kirchnerists tried to take up more political space in the workshops and debates. But for some reason, they didn’t attend the protest at the end of the Encuentro.

Despite the ‘business as usual’ attitude of the Organizational Committee that avoids spontaneous participation of women, thousands of women from all over the country gathered at the Encuentro. Many of them had taken part in the historic demonstration, “Ni Una Menos, which brought thousands of women to the streets against femicide and violence against women. The Kirchnerists didn’t show up at the final protest because they couldn’t stand facing the women who demand concrete policies to stop the increasing violence and to stop femicides.

Femicides are the cruelest form of violence. Even during this Encuentro, here at this city, two women were killed while we were demanding that the government, Justice department and opposition parties offer any answer to this serious problem (a woman is killed in Argentina every 30 hours). Furthermore, the government and the justice department are responsible for the death of 300 mainly poor young women a year as a consequence of unsafe and illegal abortions. They are also involved, as participants and accomplices, in the business of human trafficking and prostitution networks, with 3,200 kidnapped and missing women and girls in our country.

As Myriam said before, we are sure nothing good is coming for women’s rights without a fight. On the contrary, we know we need to strengthen our struggle; we need to build a strong movement to defend our rights.

But strengthening a women’s movement for our rights won’t put an end to the structure of this capitalist society, based on the exploitation of millions of people by a small minority. We live in a society that needs the massacre of women, that needs the oppression of women and the violence against women to keep the exploited working class divided. To end this structure of society, we need a much more conscious struggle. A struggle for a society without exploitation and oppression is one that we, of Pan y Rosas and the PTS, carry out every day. And we invite you to join us in this deeper struggle.

We won’t end this society with a seat in Congress, with a law or with a protest. This will end when we destroy this exploitative and oppressive society. We will end this society when we raise our battle cry, the same battle cry that has been passed down to us from our grandmothers like Clara Zetkin and like the great Rosa Luxemburg: For socialism! For internationalism! For bread and for roses!