As prices for basic consumer goods rise, corporations like PepsiCo, which owns Frito-Lay, are raking in billions while paying their employees poverty wages and investing almost nothing in additional production. 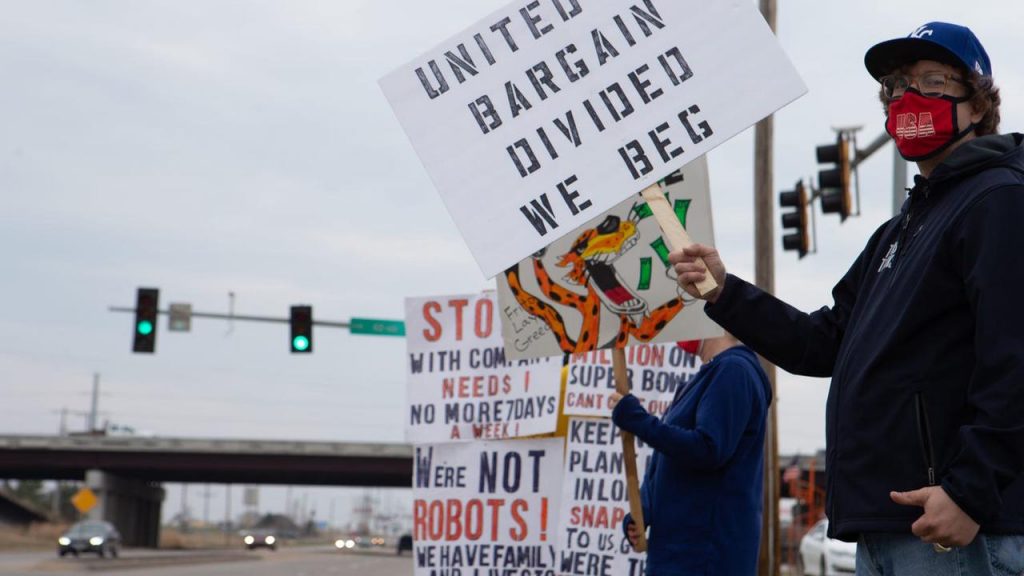 More than 500 workers at the Topeka, Kansas Frito-Lay factory, who make dozens of varieties of snack chips, have walked off the job and onto the picket lines. Their biggest grievance: for more than a year, they have been forced to work as many as 12 hours a day, sometimes seven days a week, to meet pandemic-fueled demand for the comfort foods they produce. Workers on the picket lines say that they are being “worked to the bone” and want their lives back. They want to be able to celebrate their children’s birthdays and spend time with their families and friends, but face losing their jobs if they refuse to work overtime. If this wasn’t bad enough already, wages at the plant have stagnated over the last several years, despite the company’s record profits. Earlier this month, in fact, workers overwhelmingly rejected a contract offer that included a measly two percent per year raise. That offer, which amounted to as little as 32 cents per hour for the lowest paid workers at the plant, would have actually been a pay cut and not a raise, since it is less than half of the expected rate of inflation for 2021.

Meanwhile, PepsiCo — the corporation that owns Frito-Lay — thanks to both the pandemic and rising prices, has made a killing off of these workers and the 70,000 others they employ worldwide. In fact, PepsiCo’s total revenue for 2020 rose more than 20 percent compared to 2019. Both sales and profits have far exceeded investor forecasts, and reported operating profits for 2020 were a whopping $3.1 billion. Despite these incredible profits — and despite the company already having increased prices by five percent last quarter and expecting to make similar increases this year — PepsiCo announced a $1 billion cost cutting plan, in an effort to extract even more profits out of its already overworked employees.

The strike was called by Local 218 of the Bakery, Confectionary, Tobacco Workers, and Grain Millers Union, and began on Monday, July 5th. Since then, the company has cut off employee health insurance — a nasty but all too common practice — and has attempted to bring in scabs to end the strike. So far those attempts have failed, however, and the union says that production at the plant has ground to a halt. This seems to be in large part due to the fact that Frito-Lay actually can’t seem to find many workers in Topeka willing to cross the picket line for such low wages. The company even went so far as to hire buses to bring in scabs directly from town, but workers say that the buses are mostly empty.

“Most of these buses are completely empty, or have one to three people, not counting the driver,” one worker told Labor Notes. “It’s psychological warfare,” he added. “They’re trying to demoralize and dispirit the men and women of the union in the hopes we’ll come groveling back for whatever crumbs they offer us.”

It has been almost two weeks since the strike began, and negotiations between the company and the union are not expected to resume until Monday, July 19th at the earliest. This suggests that the strike will last at least several more days, or longer if an agreement is not reached on Monday. Already, some of the workers who went out on strike are finding work at other nearby factories, many of which pay significantly more than Frito-Lay. In a tight labor market, it’s unclear how long the company is willing or able to stall production in order to defeat the strike. Indeed, their unwillingness and inability to hire more employees is precisely what led to the strike in the first place.

However, the low pay and exploitative use of overtime are also key to the company’s massive profits last quarter. Frito-Lay’s deplorable treatment of its workers is just another example of how the profit imperative inevitably trumps the needs and demands of ordinary working people both at work and as consumers. Rather than investing in expanding manufacturing capacity and hiring more full-time employees, as every economic textbook claims is supposed to happen when sales increase, Frito-Lay chose instead to run the factory at an increased pace with as few employees as possible, working as many hours as possible, to meet the demand created by the pandemic. In other words, the company is increasing production and prices, bringing in billions in profit, without having to spend a dime to hire more workers or invest in new productive infrastructure. Sure, Frito-Lay winds up having to pay employees more per hour for all of this overtime, but because employees are working more hours and earning time and half for many of those hours, it’s easier for the company to pay a lower base salary and disguise the actually deteriorating value of those wages over time, which is exactly what has happened.

Now, as expectations of inflation take hold across the economy, Frito-Lay is using this moment to raise prices even further in order to make even more profits in the short term. Last week, PepsiCo vice chairman and CFO, Hugh Johnston told Yahoo Finance that they had raised prices five percent during the pandemic, and were expecting to raise prices even more this fall. The company claims that increases in the prices of its products are the result of increased labor and transportation costs, but, as the situation at the Topeka plant —- where employees are being offered a measly four percent wage increase over two years — makes painfully clear,they are charging more not because of increased costs, but simply because they can get away with it, because it is “what the market will bear.”  And yet, not a single Frito-Lay employee will see a dime of those additional profits. On the contrary, these employees that are already hyper-exploited by PepsiCo, are going to see the real value of their wages decrease even further because of inflation. Meanwhile, the Democratic Party, despite promises made on the campaign trail, is doing absolutely nothing to address the abysmally low national minimum wage, which remains as low as $7.25 an hour in many parts of the country.

In this way, the struggle at Frito-Lay is really a sign of the times and a testing ground for how the working class can fight back in the post-pandemic economy; a victory for these workers would be an inspiration to working people everywhere. To win, however, will require more than just fortitude, determination, and a good negotiating team. Frito-Lay has factories across the country and billions in profits to draw upon. To defeat such power and wealth will require solidarity and action from Frito-Lay and PepsiCo workers across the country and the world, who are willing to link their struggles in order to increase their strength. In the long term, this also means building an independent rank and file labor movement capable of taking radical strike action that is allied in common struggle with the entire class, including the unemployed, immigrants, and oppressed people everywhere.