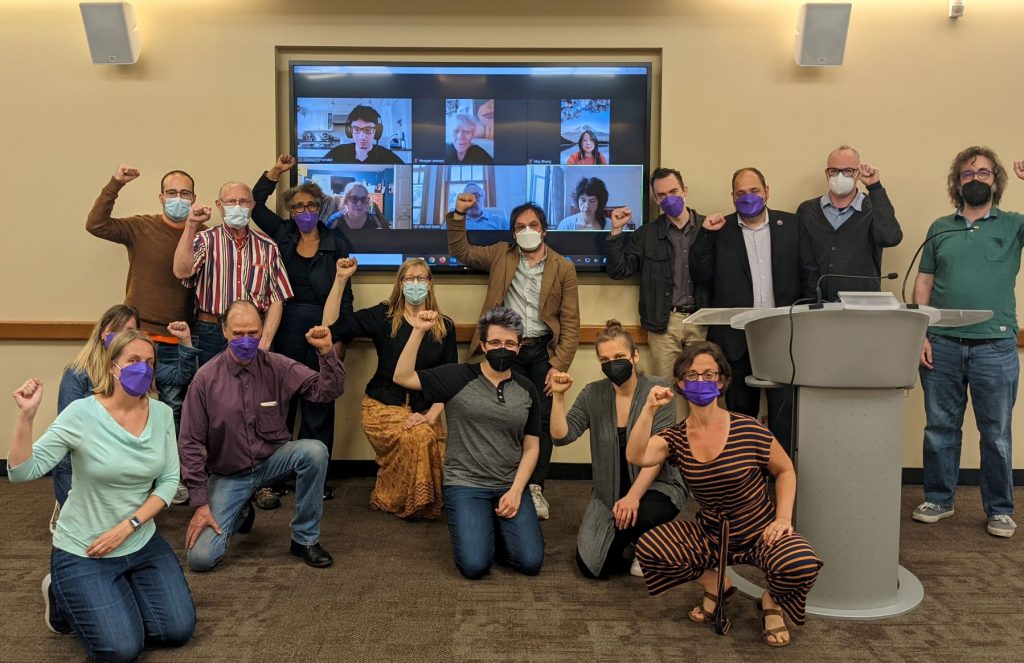 Five months into bargaining for a new union contract, Fordham University is still refusing to give its adjunct faculty any meaningful support — neither adequate compensation, nor any healthcare benefits whatsoever. In fact, so far the university has rejected seven out of eight proposals offered by Fordham Faculty United (FFU; SEIU Local 200), the union that represents both part-time and non-tenure track full-time faculty in Fordham’s School of Arts and Sciences, Graduate School of Social Services, and Graduate School of Religion. Furthermore, the university remains committed to maintaining a pay gap between schools that disproportionately underpays women and faculty of color.

Despite Fordham’s commitment to the Jesuit principle of cura personalis, or “care of the whole person,” they are not treating their employees like people — much less whole people — at all. Under the current collective bargaining agreement, adjuncts at Fordham are not eligible for health insurance, nor do they make anywhere near a living wage. The university aims to keep it that way.

One of the top priorities for FFU during this bargaining cycle is achieving pay parity for adjuncts teaching in different schools. Adjuncts in the Graduate School of Religion (GSR) and Graduate School of Social Service (GSSS) are paid about $2,000 less than their counterparts in the School of Arts and Sciences. There’s also a hidden, more insidious part: GSSS faculty include, proportionally, many more women and people of color than the School of Arts and Sciences. These groups are already overrepresented among part time faculty compared to full time faculty, but the disparity is compounded even further within different parts of the part-time workforce.

Lower pay per course for some faculty is already unfair, but the nature of the pay disparity perpetuates institutional racism and sexism by paying marginalized faculty less based on the perceived value of their contributions to the university.

The university justifies this by saying many GSSS faculty also work full time in addition to teaching and that GSSS students pay less in tuition than students in Arts and Sciences, but neither argument holds water. Labor — in this case, teaching a course and advising students — has value in and of itself, and wages should not be determined by how much outside income a worker may or may not have. And even if many GSSS adjuncts do have full-time jobs, some do not. Furthermore, tuition is not tied to wages, and payroll for the portion of the faculty represented by Fordham Faculty United accounts for only about 3 percent of the university’s entire operating budget. Almost 100 percent of GSSS faculty are part-time, making the pay disparity even more despicable — some of the lowest-paid faculty at the university are holding the entire School on their backs.

Most recently, the university confirmed it is willing to negotiate over compensation or healthcare benefits, but not over pay parity for adjuncts in GSSS and GSR, no matter what. This suggests that the university is committed to discriminating against faculty teaching in these disciplines beyond the cost to its bottom line.

The union’s initial compensation proposal would have the lowest-paid adjuncts making a minimum of $10,063 per course in the spring of 2025 — already well below the 2021 professional fair wage recommendation of $11,500. Nevertheless, the university felt this proposal was entirely unreasonable. Their most recent counter-offer, a 3-percent annual raise, doesn’t even cover the costs of the rent hikes voted in by New York’s Rent Guidelines Board earlier this week (3.25% for a 1-year renewal on rent-stabilized apartments), much less the skyrocketing prices of everything else (9.1% annual inflation as of July 2022).

Last fall, a brand new adjunct teaching in the College of Arts and Sciences made $6,873 per course. If wages kept up with inflation, that same adjunct teaching this fall would make $7,498. The university’s current proposal would put that adjunct at only $7,210 for this coming school year, by which point continuing inflation will have made that money worth even less; if the current rate of inflation continues, adjuncts would need to make $8,180 next spring just to maintain the purchasing power of their Fall 2021 wages. That’s nearly $1,000 more per course than what Fordham is offering.

Based on data from the most recent salary report from the Fordham Faculty Senate, the per-course equivalent for tenure-track faculty (accounting for tenure-track faculty’s research and service obligations) is in the neighborhood of $15,800, not including the value of their benefits, which part-timers do not receive. For unionized, non-tenure-track faculty, the minimum per-course equivalent is $8,000, not including the value of full-time benefits. This differential shows how Fordham saves an enormous amount of money by underpaying both adjuncts and full-time lecturers — the faculty represented by FFU — to teach the majority of its courses. The university is invested in keeping its adjuncts impoverished.

But it’s not just that wages aren’t keeping up with inflation or that wages are unfair compared to tenure-track faculty — wages are just too low, period. Adjunct lecturers in the Graduate School of Religion at Fordham University — the lowest-paid of all adjuncts at the university — are paid only $4,600 per class. Therefore, the most one of these adjuncts could make, teaching the maximum number of courses they are allowed, is $18,400 per year before taxes. Even the highest-paid salary band of adjuncts at Fordham only make $32,000 per year if they teach as much as they are contractually allowed.

The union has presented the inflation data and current wages in comparison to a living wage, but the university representatives have simply stated that inflation is not their fault and it’s unfair to expect them to raise wages accordingly. In other words, the university wants workers to bear the burden of inflation and suffer the very real pain of rising costs, rather than cut into the university’s bottom line. In private, the university’s lawyer has admitted that when adjuncts claim to be making poverty wages, “Their math is not wrong.” But the university seems to be okay with that.

Pitting students and tenure-track faculty against contingent faculty unions is literally part of the union busting playbook, and all members of the campus community must resist these efforts. NLRB guidelines prohibit tenure-track faculty at private universities from unionizing, but this ruling drives a wedge between workers who are all exploited by the same employer. Persuading tenure-track faculty to view themselves as managers, when many correctly view themselves as fellow workers, is also part of the union busting playbook. This is one piece of how universities structure a multi-tier system, with tenure-track, non-tenure track, and part-time faculty all laboring under different working conditions, with part-time faculty at the bottom, despite teaching the majority of courses at most universities.

Right now, supporters can sign the open letter calling on Fordham University to meet the union’s demands. Anyone, but especially students, other Fordham employees, and alumni, can call or write to the university to express their displeasure. If and when the union calls an action, everyone who can should turn out to demonstrate and show that FFU is not alone, and that the university cannot get away with harsh bargaining and pitiful proposals without everyone knowing about it. Students can and should organize their own solidarity actions once they return to campus this fall. Should a strike or lockout occur, other faculty and graduate student workers in the NYC area must commit to not crossing the picket line by accepting adjunct scab jobs, just as nearly 800 academic workers did when Columbia University began preparing to replace its graduate student workers during their strike last spring.

The union’s current contract extension expires at the end of August, and frustration is growing on both sides of the bargaining table. Fordham Faculty United will benefit from any and all acts of solidarity between now and whenever a tentative agreement is reached.