Forget Impeachment. All Politicians Should Be Revocable

Impeachment is an entirely undemocratic process that is never used in the interests of the working class. But what’s the alternative? 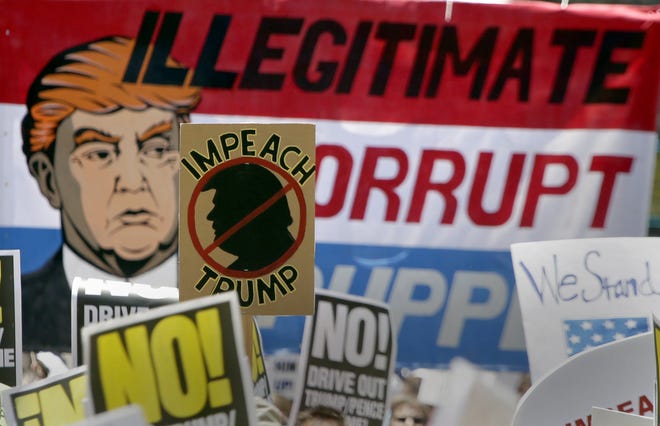 Weeks after it was passed in the House of Representatives, the impeachment proceedings in the Senate are well underway. While both parties bicker, Chief Justice John Roberts calls the Senate the “world’s greatest deliberative body.” But it isn’t a deliberative body at all, much less the world’s greatest. Everyone knows that the impeachment isn’t going to pass the Senate and that this is just a circus spectacle for the Democrats to pretend they are a real opposition to Donald Trump.

But impeachment isn’t a new conversation. Since the start of Trump’s presidency, the Democrats have been dangling the possibility of impeachment above Trump’s head, prolonging a never-ending Russiagate investigation.

In the last three years, there have also been concentration camps at the border, accusations of sexual assault against Trump, assassinations of foreign leaders, and the dropping of “the mother of all bombs” — just to name a few of Trump’s other crimes. No one in Congress moved to impeach Trump on any of these issues.

The straw that broke the camel’s back was instead a phone call between Trump and the leader of the Ukraine threatening to withhold military aid if Ukraine wouldn’t help Trump investigate Joe Biden’s son, Hunter Biden. In other words, impeachment proceedings were started to defend a major figure in the Demcratic Party, not to defend the working class and oppressed people who have been attacked by the Trump administration for the last three years.

It’s true that Donald Trump has done some sketchy stuff here. He admitted to threatening to withhold foreign aid to Ukraine in exchange for the investigation of a political opponent. In typical Trump style, the veil of honor and respectability of the presidency is torn away, revealing the president (and presidents before him) as just a corrupt thug looking out for his own interests and the interests of a small group of capitalists.

However, the United States has engaged in much worse than withholding military aid. The United States has organized coups to protect the interests of U.S. corporations and begun wars for oil to enrich Presidents’ friends and family. The reason the Democrats are up in arms is not because the President used economic pressure for his own gain. It’s because he used that economic pressure against a Democratic Party leader.

It is also important to remember that Joe Biden himself really is embroiled in shady dealings. Hunter Biden was on the board of Burisma Holdings, one of Ukraine’s largest natural gas companies. He was making $50,000 a month in this position — more than what large sections of Americans make in a whole year. Watchdogs saw this as a problem long before Donald Trump became President. Although none of the Democratic Party candidates are willing to say it, it was a clear instance of nepotism that was immensely profitable to Hunter Biden.

This is really a story of Democrats and Republicans both using foreign policy in their own interests, as the United States has done throughout history.

This impeachment is a squabble between two parties of capital. It’s a squabble far removed from the interests of the working class; it’s far removed from anything relevant to the day to day lives of everyday people, such as the rising costs of healthcare and education or the debts that working class people pay every month but never seems to go away. The impeachment process is a massive distraction orchestrated by establishment Democrats to keep the focus away from Medicare for All or any other progressive demands that voters may be interested in — and it’s a circus every single Democratic Party candidate is holding up, even though it seems almost impossible that this process will result in actually ousting the President.

All politicians should be revocable. And to go further, presidents and their king-like executive power shouldn’t exist. And nor should the Senate, which is not based on equal representation at all, but on the anxieties of leaders from low-populated British colonies (the original states) centuries ago.

Politicians Should Be Revocable

A pillar of our “democracy” is that every couple of years, we have the right to go to the ballot box to choose between tweedle-dumb and tweedle-dumber. As Lenin put it, “To decide once every few years which members of the ruling class is to repress and crush the people through parliament — this is the real essence of bourgeois parliamentarism, not only in parliamentary-constitutional monarchies, but also in the most democratic republics.” This way of doing politics makes sure that for the majority of the working class, politics is a far off concept: a thing that happens in Washington and maintains the status quo. That’s why a dismal 50% or less of the United States votes — and why for people of color, the numbers are even lower. As the podcast The Wilderness notes when interviewing people who did not vote in the last election, “It’s not that these voters are apathetic. They brought up all kinds of issues they clearly care about, from healthcare to education to housing prices and police brutality. They just don’t see how these problems get solved by voting.” People vote with their feet, and many — or even most of the people in the U.S. know that voting won’t change their lot in life.

Those who do vote — often after spending hours in long lines before or after work — no longer have a say after casting their ballot. It’s a four year commitment to the President and a six year one to the Senate. As we all know, during election season, these politicians promise workers the sun, the moon, and the stars, only to go back on all (or nearly all) of their promises. Voters, however, are stuck with the person in office, while corporations spend billions of dollars lobbying them and donating to re-election campaigns to curry political sway.

The only way to remove the president under the current political system is to hope that the House of Representatives and the Senate will vote to do so, no matter how much people disagree with the President’s policies. Trump’s disapproval rating climbed to 56% in January 2019, and there was no mechanism to recall him. In Chile right now, President Pinera’s approval rating is 8%, and there is no mechanism to remove him. That’s the nature of capitalist “democracy.”

What about impeachment, you say? Sure, the House of Representatives can impeach a president, but they did so because Trump tried to get Ukraine to investigate Hunter Biden. In the case of Bill Clinton’s impeachment, the concern was never for Monica Lewinsky but was rather a salacious and desperate attempt to undermine Clinton. Impeachment is never about the interests of the working class or oppressed people.

In addition, impeachment is not an effective mechanism to oust a president. Although three presidents have been impeached in the history of the United States, not one was actually removed from office using that process. Not a single one. Let’s be honest, the crimes of U.S. presidents are numerous: there are the crimes allowed by the law, like drone strikes and imperialist wars, and those that are not allowed by the law, like covert coups and illegal schemes like Iran-Contra.

Rather than fighting for impeachment, we need to fight for all politicians to be revocable by popular demand, with one person, one vote. It also means everyone over the age of 14 should be allowed to vote, including those in prison, undocumented people, and youth. In other words, we should be able to hold a referendum on politicians at any time we want. The vice president shouldn’t automatically be the next in line for the presidency. Is it all that progressive to replace the ultra-conservative Donald Trump with the ultra-conservative Mike Pence? Revocability should allow us to vote in someone new.

Down with the Presidency

But, we have to go further. We shouldn’t allow tyrannical figures like the president — an almost king-like figure that can rule by executive order — to exist at all. The Trump administration certainly demonstrates the undemocratic power of the president. Donald Trump has almost unilaterally sent the U.S. into war with Iran. He is building a border wall and created a Muslim ban, all by executive order. Trump has issued an average of 46.5 executive orders per year — more than any president since Reagan — even though, for two thirds of Trump’s presidency, he held the majority in Congress. As class struggle advances and climate catastrophe and economic crisis loom, it’s possible that in the future we could have someone worse than Trump in office who, without breaking from “legality,” uses executive orders in more repressive ways.

People are starting to notice the undemocratic nature of the presidency. In fact, even USA Today ran an article arguing for the abolition of the presidency. The truth is, no one should have such singular and consolidated power. It’s time to abolish the presidency and make sure all elected delegates are revocable.

Abolish the Senate Too

The impeachment process also brings the undemocratic nature of other parts of the government to front. The power to remove a president, for instance, lies with the most undemocratic of the two chambers in Congress: the Senate. Far from being revocable, Senators are elected every six years, with long and comfortable terms in office.

Not only should members of Congress be revocable; there shouldn’t be a Senate.

As we begin to unravel all the undemocratic elements of the United States, it becomes clear that rather than mobilizing to impeach Trump for shady dealings with Ukraine, we need to fight against each and every one of Trump’s oppressive policies, as well as against this anti-democratic system.

But, we have to be realistic: there won’t ever be real democracy within capitalism. A real democracy is impossible without being able to decide democratically about production and reproduction. If the means of production are in the hands of capitalists who despotically decide on production and the lives of their workers based on their bottom line, there can be no true democracy. The only real democracy is one where decisions about public transit would be in the hands of workers and people who ride the subway, bus and train; where decisions on healthcare aren’t made by insurance companies or for profit hospitals, but by patients, their families, doctors, nurses, and other hospital workers.

In this sense, a real democracy can only occur in socialism, where elected delegates would decide on all aspects of society’s functions. Such a democracy should follow the example of the Paris Commune, where delegates were revocable at any time and made the same salary as a teacher. It should follow the examples of soviets, where elected delegates from different sectors of the workers, as well as from different communities could discuss and vote.

Working class people who want a real democracy have to fight for revocable members of Congress, and to abolish the presidency and the Senate. But we can’t stop there. Working class people who want real democracy have to fight for socialism: for a society in the hands of the working class and oppressed where we can grapple with, think about, and vote on the solutions to the pressing issues in our society, from climate change to how to run education and healthcare.