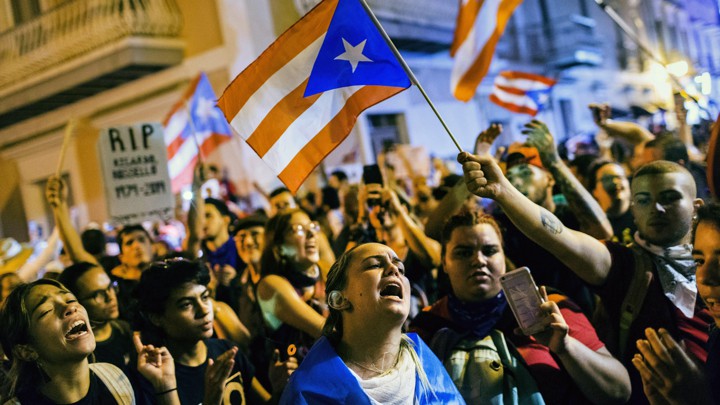 Day after day, Puerto Ricans took to the streets by the hundreds of thousands demanding the governor’s resignation. This was a response to the publication of chats by the governor in which he expressed the most vile, disgusting ideas: homophobia, sexism, making fun of the victims of Hurricane Maria. In the past month, Puerto Ricans have uncovered the most blatant examples of corruption by their government: 15.5 million dollars in contracts directed towards unqualified favored businesses. Puerto Rico’s US-born education secretary Julia Keleher was indicted by the FBI for this fraud, along with Ángela Ávila-Marrero of Puerto Rico’s Health Insurance Administration.

After years of neoliberal measures, privatizations, an unpayable debt, a hurricane caused by a global climate crisis that Puerto Ricans played essentially no role in creating… poor and working class Puerto Ricans stood up.

With the slogan Ricky Renuncia (“Ricky, Resign”), Puerto Rico spent the last 12 days in mobilizations and on strike. Waving Puerto Rican and rainbow flags, they spent the day walking in the hot sun to express discontent. On Monday, there was a general strike calling for Rosselló’s resignation, grinding businesses to a halt. At night, protestors still hadn’t left the streets, and they faced tear gas and rubber bullets. And around the world, people mobilized in solidarity. In New York City, for example, hundreds walked in the rain in solidarity and ended their protest in Grand Central Station.

First Rosselló said he wouldn’t run for re-election. That wasn’t enough for the emboldened and enraged protesters. The mobilizations were victorious, toppling Ricky Rosselló late on Wednesday night. His concession speech was entirely wacky, claiming his government was effective and one of the best in Puerto Rico’s history.

The fight isn’t over though. The Puerto Rican regime, more afraid of the mobilizations of the working class than of a new governor, is seeking an orderly transition to the justice secretary, Wanda Vázquez. But this won’t change the colonial relationship with the United States or the massive and crippling debt. The ongoing effects of Hurricane Maria mean that the Puerto Rican masses still have a lot to fight for.

We’ve seen how when governments fall, the most organized sector always takes power. In the case of the Arab Spring, or even the most recent case of Sudan, this means the military. Even if the right can’t seize the opportunity, what is to say a more politically correct capitalist won’t come into power, also carrying out neoliberal measures for the benefit of their class? The Puerto Rican working class deserves its own government — one based on democratic organs of self-rule, free of U.S. colonialism and capitalist parasites.

In the meantime, a very different situation was happening in the United States. Certainly, Donald Trump has shown his abhorrent ideas and policies: “grab them by the pussy,” “shithole counties,” “go back where you came from,” etc. etc.. Donald Trump is responsible for the deaths of 24 people in camps, including at least 6 children.

The reasons to overthrow Trump abound.

And yet, in Washington the Democratic Party and the bourgeois #Resistance are placing all their hopes on special counsel Robert Mueller. Yet, the #Resistance hinges on the testimony of the former FBI chief who was responsible for constructing the massive apparatus for repression after September 11. In the air-conditioned Capitol building, wearing suits and ties, the #Resistance continued their fishing expedition, attempting to tie Trump to collusion with the Russian government.

For the increasing numbers of people who want to get rid of Trump, but aren’t sure how, the answers cannot be found in Mueller’s testimony.

And the answers won’t come from the Democratic Party. Despite all the hype, the Democrats actually oppose impeachment proceedings. This is because the Democratic Party wants to work with Trump: they agree on militarized borders, on funding ICE (which many Democrats in the House voted for) and even on compromising on the border wall (which many Democrats, including Sanders voted for). Even the most left members have shown absolutely no leadership in organizing any kind of active mobilizations against the concentration camps.

For all of those who oppose Trump, we have a clear way forward.

It isn’t waiting until November to vote the “right people” in—especially since the Democrats have shown time and again that even if they talk big during election season, they will sell us out in the end.

It isn’t in lobbying Congress and waiting, waiting forever for the politicians to vote some timid resolutions. It’s not in trusting capitalists and their parties. It’s not in counting on a smoking gun to emerge out of the Russia-gate circus.

Puerto Rico shows the way forward: strikes, protests, mass mobilizations. This is how we win. Solidarity mobilizations are also very important. Certainly, if Puerto Rican workers and other oppressed sectors were to continue to fight, protests by people in the US would be important, or even necessary.

And yet, the struggle in Puerto Rico is an important lesson for those of us in the US. If the people of a hurricane-ravaged, hyper-privatized US colony can rise up and win, so can we.  Strikes and the fight in the streets isn’t just for “those people,” for the Black and Brown people in semi-colonies. The same principles apply here.

We can defeat Trump if we fight, like the Puerto Rican masses did.