“Fortress D.C.” Has Nothing to Do With Keeping People Safe

The nation’s capital has become a militarized zone in the runup to Inauguration day on January 20. But this is all about protecting the government and nothing to do with protecting the Washington’s working-class residents, who have been living in “Fortress D.C.” since the attacks of 9/11. 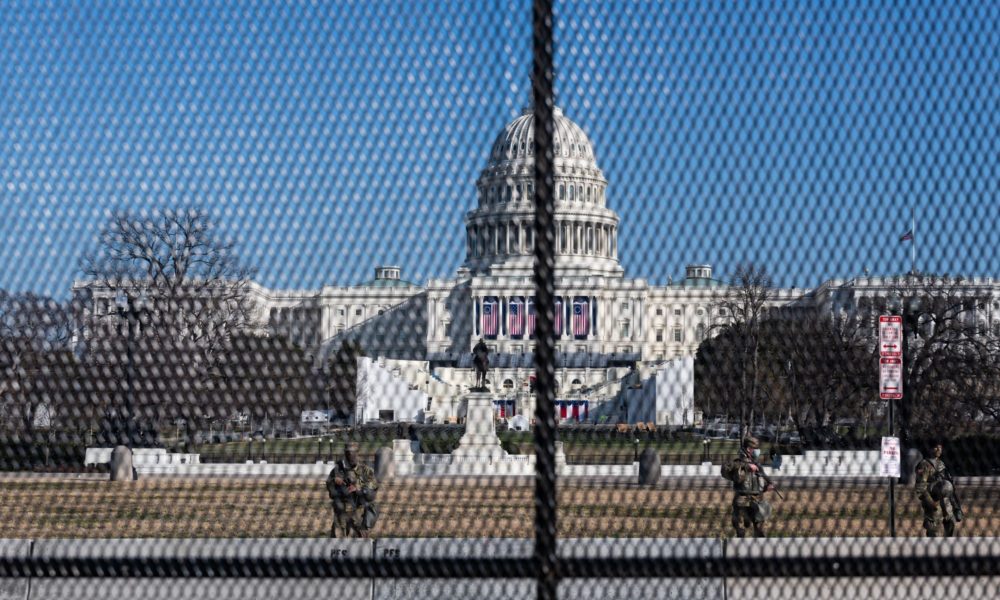 Days before Joe Biden’s inauguration, Washington, D.C. looks more like the site of a U.S. military occupation than the American seat of government. In response to the storming of the Capitol on January 6, and in anticipation of emboldened right-wing protests, troops from all 50 state National Guards and police from various federal agencies have poured into the capitol. An unprecedented 20,000 armed agents of the state will patrol the district’s 68-square-mile area, equivalent to nearly 3 percent of the city’s population. For the coming week, D.C. will host more armed officers than the U.S. deployments in Iraq, Afghanistan, and Syria combined. Public access to a huge area around the National Mall, from Foggy Bottom to East End, has been completely restricted. Traffic and busses are rerouted, and 13 metro stations are out of service, creating nightmare commutes for those who must still work outside their homes. So-called “unscalable fences,” seven feet tall and topped with razor wire, line the perimeter, and dump trucks and buses have been set to obstruct vehicle traffic in many other nearby streets.

Private entities are also working with government and security forces to monitor and control the population in the coming days. Airbnb has cancelled and blocked all area reservations during inauguration week, while rideshare apps Uber and Lyft are working with law enforcement with the aim of restricting travel in wider sections of the metropolitan area.

This is the completely predictable reaction of the bourgeois national security state to the January 6 events: more fences, more checkpoints, more men with guns. But Washington doesn’t suffer from a “lack of security”: the city’s core has been highly militarized for years, since the 9/11 attacks, earning the nickname “fortress D.C.” from residents. Militarization of the capital is a one-way ratchet, where even the potential for unrest provides a ready excuse to expand police presence. Whether it’s Donald Trump’s inauguration, the onset of the Covid-19 lockdown, last year’s Black Lives Matter demonstrations, and now the inauguration of Joe Biden, there’s no event to which the security state’s answer is not “more police.”

After an event has passed, however, there is seldom a complete draw-down to previous levels of policing. Instead, the working people who must move through the city without benefit of a black-car entourage are subjected to ever more checkpoints, traffic stops, police dogs, and metal detectors. While members of Congress may feel slightly safer to see kevlar-vested National Guardsmen on every corner, the D.C. working class can expect only inconvenience, suspicion, and a greater likelihood of deadly encounters in their own neighborhoods and workplaces.

If the attempted insurrection teaches us anything, it should be that the number of police, security officers, and troops matters far less than where their sympathies and loyalties lie. Unfavorable numbers did not dissuade police from engaging violently with BLM marchers, who always numbered far more than the police at any given demonstration. Meanwhile, the right-wing mob that entered the Capitol building was several thousand strong, nearly a one-to-one ratio with the uniformed officers assigned to the Capitol complex. The lack of an overwhelming, violent response from security forces — like the one seen last summer — was not a “failure to anticipate,” a “lack of preparation,” or the police “caught off guard.” It was deliberate.

Even before the unprecedented surge we’re now witnessing, the federal district has always had far more law enforcement deployed than any other part of the country. Despite the high and ever-increasing police presence, however, the streets of D.C. are no safer or more peaceful for its working class. Residents of the city’s poorest neighborhoods have long felt that the police actually do too little to keep their streets safe, while also criminalizing basic existence. The coronavirusd crisis has brought this into sharper focus: police break up outdoor gatherings in parks with threats of arrest ,while the murder rate has ticked back up to the level of the early 2000s. The lack of government support during the pandemic has caused a predictable surge in crime, and D.C.’s many community-based violence-interruption efforts have been allowed to wither under austerity budgeting. Police budgets, though, remain inviolable: the city’s supposedly progressive mayor fought calls to defund or demilitarize the city’s force. Instead, the anwer, as always, is more funding, “better” training, and more actual cops.

There was no lack of police in 2016 when more than 200 protestors outside Trump’s inauguration were arrested and stuck with outlandishly exaggerated charges. There was no shortage of armed agents willing to gas a path through protesters in Lafayette Square last June, beating journalists and clergy so Trump could stage a photo op. There are never too few police to chase down a Black teenager on a moped for not wearing a helmet, or to riddle with bullets the car of a woman with a baby in the back seat. Year after year, the D.C. Metro Police brutalize the district’s citizens with near impunity — the typical consequence for maiming or killing a civilian is a temporary reassignment to desk duty — without providing any meaningful measure of safety for anyone except the well-to-do and politically connected.

If Joe Biden’s response to right-wing terrorism seems tepid, it’s because an honest condemnation of the attempted insurrection would require him to acknowledge the complicity of police. But the Biden/Harris administration will be every bit as pro-cop as Donald Trump’s; they have both long cloaked themselves in the banner of “law and order” — even if Harris uses different words. Biden’s promise of a return to the Obama era reads as a chilling threat to maintain the conditions that fomented the rise of the Trump cult in the first place.
No Democratic president could be expected to do anything fundamentally different, because Democrats do not question the legitimacy of policing. Their solutions are always more police (just “better”), higher budgets, bigger guns, and taller fences, even as the police grow less guarded about their violent authoritarian sympathies. Proposals to organize and empower working people to oppose right-wing violence will never come from the Democrats; they will repress such efforts. Placing the instruments of state violence in the hands of a friendlier oppressor will not make ordinary people’s lives any safer or easier. If the razor-wire fences in D.C. do come down after Inauguration Day, security will still remain tighter than it was before they were put up, at the expense of those who actually live in D.C. and make the city run.