As one million refugees flee the war in Ukraine, European countries are showing their racism by prioritizing white refugees. Let them all in! 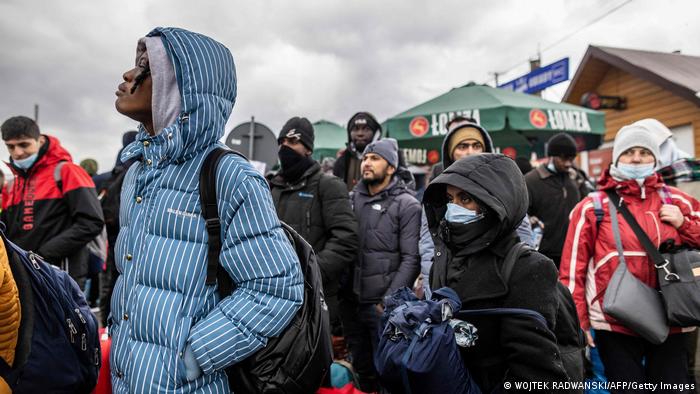 One million refugees have fled Ukraine since Putin began his assault on the country, according to the United Nations. This refugee crisis has put the racist character of Fortress Europe on display. African, Middle Eastern, and South Asian refugees are reporting that as they try to flee, they are being deprioritized over white refugees, being beaten by border guards and even forced to remain in Ukraine.

A Nigerian doctor told the New York Times, “The Ukrainian border guards were not letting us through. They were beating people up with sticks. They would slap them, beat them and push them to the end of the queue.” More and more firsthand accounts of similar experiences with racist border guards are being shared on social media and with reporters. As white refugees boarded trains to flee, African women were sent to the backs of lines and forced to wait in the cold. Nepalese, Indian, and Somalian men told Time magazine that Ukrainian border guards kicked them and beat them with batons.

In just a few days, many European countries have changed their immigration policies to let in Ukrainian refugees. Almost every European country neighboring Ukraine is allowing Ukrainians to enter without paperwork. This is in stark contrast to the militarized, deadly response that these same countries established in response to the 2014 Syrian refugee crisis and other cases of mass forced displacement from the Middle East and North Africa.

According to Statista, some 1,400 refugees drowned trying to cross the Mediterranean Sea from 2014 to 2021. Statista notes, however, that many refugee deaths go unreported, and the real death toll could be closer to 12,000. These are also just the deaths at sea. Many refugees also die on their journeys from murders by the far-right groups throughout Europe, suffocation, dehydration, and hypothermia, all causes of death that vary based on a refugee’s particular route and destination, but all ways refugees have died trying to escape homes that are war-torn, underdeveloped, and suffering from climate disasters. All these causes of forced displacement are fueled by U.S. and European imperialism. Then these countries militarize their borders to keep refugees out and make their treks more deadly.

In fact, just this year Poland began constructing a border wall with EU complicity to keep out Middle Eastern refugees. Poland’s militarized border has opened to Ukrainians escaping the war. It is also the border where there are the most reports of racism toward African, Middle Eastern, and South Asian refugees.

Russia’s reactionary assault on Ukraine has unified the imperialist nations of western Europe. Along with sending weapons to Ukraine, increasing their military budgets, and waging brutal economic warfare on the Russian working class, many European countries are using the war as an opportunity to portray themselves as beacons of democracy and human rights. This propaganda is a weapon to rally working-class support for NATO imperialism. Nothing shows more clearly how hollow it is than the racism and militarism behind these countries’ response to the refugee crisis.

As people around the world question how they should respond to this war in a truly humane way, many forces in favor of NATO imperialism are using the masses’ confusion to push their imperialist agenda. The racist policies of western Europe’s border regimes show clearly that NATO has no interest in the well-being of Ukrainians and other refugees, and instead seeks to divide us along racial lines. Solidarity must be with the people whose lives are destroyed and whose voices are silenced by imperialist wars, from the refugees fleeing Ukraine to the Russian protesters opposing Putin in the streets. The working class in Europe must show its solidarity by mobilizing in defense of all refugees and rejecting attempts by their governments to divide workers along racial lines.

Open the borders! Let them all in!