In Paris and other cities in France, hundreds of thousands of people took to the streets on Saturday, November 28, to demonstrate against the government’s proposed law to restrict freedoms and protect the cops. 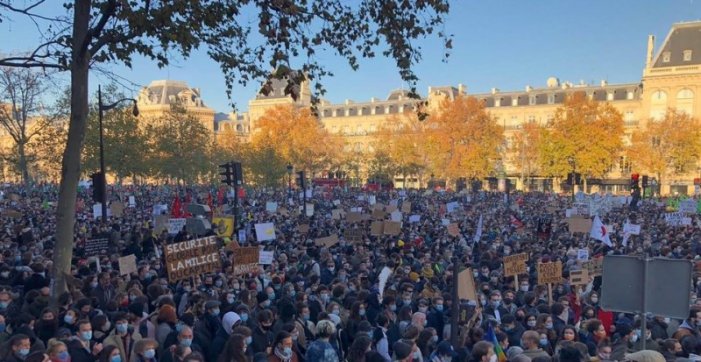 On Saturday, November 28, dozens of demonstrations took place across France to denounce the Emmanuel Macron government’s new security bill, which would seriously curtail freedoms in the country, and against a new case of police violence in which three cops brutally beat a Black music producer. The mobilization in Paris was particularly large. More than 100,000 demonstrators marched from the Place de la République to the Bastille. Protesters came from the entire political and trade union Left, and included an important contingent from the New Anticapitalist Party (NPA). Several groups that fight police violence were also present, including the Justice and Truth for Adama Committee.

Thousands have mobilized in recent weeks against the Global Security Act and laws that curtail freedoms, creating enough momentum to put the government on the defensive — especially after revelations about violence against journalists. But in the past week in particular, two events have deepened distrust of the government and anger about its police. One is the violent expulsion of refugees from the Place de la République on Monday, November 23; the other is the release of videos showing the cops beating Michel Zecler, a music producer.

“Had last week’s violence in République or Saint Denis not been filmed, no one would’ve known about it. In fact, the victims could have ended up in prison” — Sissoko, spokesperson for the solidarity march.”

Several key elements of the Global Security Act have provoked special backlash. The law would restrict the dissemination of photos and videos of any interventions by either of the two national police forces. It would also allow authorities to use drones and access video and stills from street cameras and during demonstrations, something previously forbidden.

“The UN has called France to order; the worst dictatorships call on France to repress their own people. France has become a model of repression in the world.” — Mathilde de Panot, France Insoumise member of parliament for Val De Marne

Crowds of people at the Place de la République in Paris for the Liberty March against freedom-destroying laws.

Macron’s government continues to look for ways around total rejection of the bill by proposing formal modifications to aspects that are being most challenged. At the same time, it is tightening the part of the law that would allow attacks on journalists who publish images of police violence.

Police repression was harsh during the Paris march and as thousands of people arrived at Bastille Square. Social media were full of images of police violence, something the government’s new law would prevent if enacted.

The situation remains tense at Bastille. A policeman is pointing at a journalist with his rubber-bullet launcher at point-blank range.

A mass movement is needed to force the government to withdraw this bill. People from the poorer neighborhoods that suffer from state racism and are the primary victims of police violence have an important role to play in the mobilizations. And with the government threatening the very right to protest with all the security law provisions aimed at monitoring demonstrations in real time, the labor movement must also play a central role in keeping the bill from passing.

First published in Spanish on November 28 in La Izquierda Diario.