France: Yellow Vests Are Everywhere, Despite a Police Siege

This Saturday was #ActeV of the #GiletJaunes (#YellowVests) movement in France. For the fifth week, thousands of protesters took to the streets while the police shut down large parts of the city. Yet there was a marked decline compared to the previous week. Is this the beginning of the movement’s end? Left Voice correspondent Wladek Flakin reports from Paris. 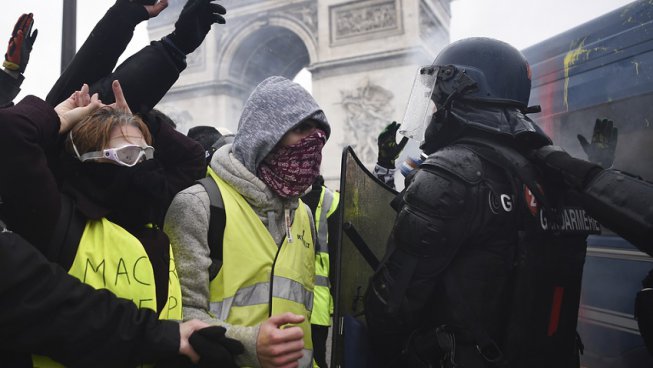 On Saturday, the eternal gray of the Parisian winter was again pierced by the neon yellow of warning vests. Just days before Noël (Christmas), many luxury shops were missing their traditional fanciful window displays—they were covered with plywood and graffiti. Riot police blocked off large zones of the city, especially around the Champs-Élysée, where the heaviest fighting took place. Despite the repression, protesters in yellow vests could seemingly pop up anywhere and block traffic. The chant “Gilets Jaunes partout” (Yellow vests everywhere) seemed like a reality.

This Saturday again saw heavy fighting on the Champs, which the French ruling class likes to think of as the world’s most beautiful avenue. Police used rubber bullets and tear gas, as well as horses and tanks and water cannons, to disperse groups of protesters. They attempted to surround any group of more than 100 or 200 people, trapping them with batons and pepper spray.

As happened last week, several thousand people gathered at 10 a.m. at the St. Lazare train station, called by workers’ groups, the extreme left and antiracist and LGBT initiatives. But this demonstration was immediately trapped, and participants had split up into small groups to reach other parts of the city. Another gathering took place at Opera Square. There, several thousand Yellow Vests were surrounded by police trucks and tanks for hours.

This was #ActeV, the fifth Saturday of protests, and there was a marked decline compared to the previous two weeks. On December 1 and December 8, the French state effectively lost control of central areas in Paris. As there were last week, 89,000 police were deployed across the country, with 8,000 in the capital. The French bourgeoisie had mobilized its entire repressive apparatus for this one day.

Decline in Paris, but Larger Mobilizations in Other Cities

In cities like Toulouse and Bordeaux, the mobilizations were bigger and more determined than ever—Toulouse saw the largest demonstrations in the country, with thousands of people taking to the streets. The police used stun grenades and water cannons, injuring hundreds.

The bourgeois media focused only on the decline in Paris. This was a fact, and there were six factors that contributed to it:

1. Repression. One thousand people were arrested across the country on Saturday. This made some people more determined—but it scared others away. In addition, hundreds of people were prevented from entering the capital after they were stopped at police checkpoints on the freeways.

2. Terrorism. The government used the terrorist attacks at the Christmas market in Strasbourg to pressure the Yellow Vests to cancel their demonstration. The most moderate wing of the movement obliged. But other Yellow Vests’ leaders rejected this cynical ploy: The gathering at Opera Square began with a moment of silence for those killed in Strasbourg, but also for Yellow Vests killed during protests.

3. Exhaustion. After five weeks of semi-insurrectional demonstrations, parallel to round-the-clock street blockades at traffic circles throughout the country, many protesters are suffering from physical exhaustion. Many have gone on vacation from their jobs, worsening their already precarious financial situations.

4. Concessions. On Monday, President Emmanuel Macron gave a speech offering minor concessions such as a state subsidy for some people earning the minimum wage. These measures met almost universal disdain—but the cancellation of the fuel tax hike, which had originally sparked the movement, was enough for some protesters to justify staying home.

5. Betrayal. Yellow Vests have attempted to paralyze parts of the economy. The next step would be to use the methods of the workers’ movement and fight for a general strike. Yet the bureaucracies in charge of the trade unions have prevented this, and instead of calling a general strike to link up with the Yellow Vests, they held a toothless “Day of Action” that disappointed everyone.

6. Weather. Even if revolutionary situations have matured in much worse weather, on Saturday the temperature was almost 10 degrees lower than the previous week, right around freezing, with a light rain all afternoon and evening. This must have had an effect as well.

A Referendum Will Not Create Democracy

Does this mean the movement is in decline? Will Macron regain the initiative? The “président du patron” (the capitalist’s president) is almost universally disdained. The French republic’s highly centralized presidential system offers few backup figures for such a situation—Macron has almost four years left in his term. Yet what social force will be able to topple him?

Despite their determination, the Yellow Vests cannot win without amplifying their movement. For us, as revolutionary Marxists, this means combining social demands with a radical-democratic program to question the entirety of the French bourgeoisie’s Fifth Republic. The only means to accomplish this is organizing action committees that fight for a general strike.

Despite Macron’s ongoing weakness, the Yellow Vests movement could fall victim to its own confusion. One slogan that was visible everywhere on Saturday—written on vests and signs, and explained in interviews—was the “RIC” or “Citizens’ Initiative Referendum.” This is a proposal, developed by an activist with ties to the extreme right, to introduce national referendums into the French constitution.

Referendums are a beloved method of autocrats and fascists. They create an illusion of democracy while transforming the working population from a cohesive social group into a mass of atomized “citizens.” Sitting alone inside a voting booth or in front of a computer, they become fodder for right-wing demagogues. A large number of Yellow Vests believe that referendums, by expressing the majority’s will, could put an end to the discredited, corrupt political regime. But even if referendum voters approved a measure that opposed the capitalists’ interests, who would implement it? Macron, perhaps?

A radical-democratic program recognizes that the Fifth Republic and the quasi-monarchical institution of the president must be overcome, and it calls for a single representative assembly, elected by all residents of the country over age 16, regardless of nationality. This assembly would debate and decide all fundamental questions, regardless of all previous constitutions, independent of the unelected judges and state functionaries. This kind of radical democracy in the tradition of the Paris Commune of 1871 would make all functionaries subject to election (and also recall), while eliminating all privileges and giving them the salary of a normal worker. This kind of radical democracy—and not a referendum added to the current constitution—is what is needed to satisfy the Yellow Vests’ demands.

This kind of democratic assembly would discuss not just political but also economic questions. As Marxists, we would fight for a democratically planned economy based on councils in the factories, workplaces, universities, schools and neighborhoods. As long as we lack a majority that supports this perspective, we support a radical-democratic program to speed up the masses’ experience with the Fifth Republic and its institutions.

Revolution in the Air

Looking at France from outside, it is easy to think this is just one of the endless series of social movements that seem to rock the country two or three times a year. Don’t the French just like to strike? At the moment, the number of protesters on the streets is not particularly high, and the workers’ movement has not made its strength felt.

Yet not just the Yellow Vests but also the opinion leaders of the bourgeoisie are talking constantly about the danger of revolution. The French Republic can remain in power with repression, yet this exercise is dissolving its legitimacy in the eyes of large sectors of the population. Since the 1970s, there have not been revolutionary experiences in any of the central imperialist countries. Now revolution is returning to the imagination of working people.

Particularly the students of France have been taking to the streets in the last two weeks—50,000 were on strike across the country on Tuesday. Their movement started with demands against a new system for selection at the universities, but it is now largely fired by the fierce repression they have suffered. A new generation is coming into adulthood with few illusions in the bourgeoisie’s republic. This means that even if Macron can survive this crisis and the Yellow Vest movement does decline, there are even greater conflicts on the horizon. Now is the time to build up a revolutionary socialist left that unites workers and youth—in France and around the world.