About 200 people gathered in New York City in a protest for abortion rights. 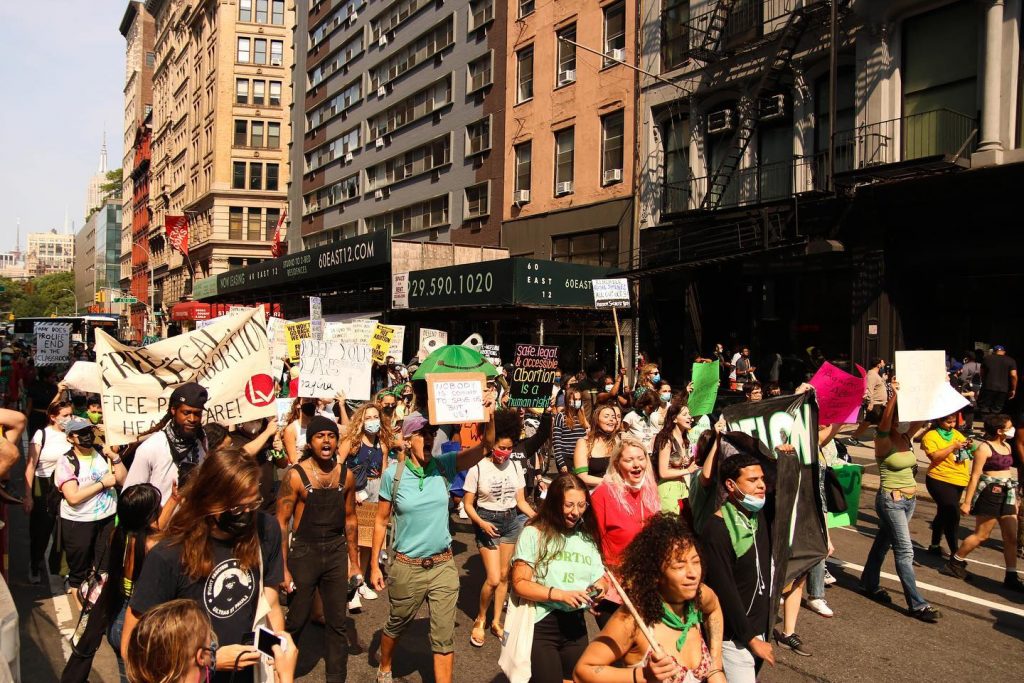 When abortion rights are under attack, what do we do?
Stand up, fight back!

On Sunday, hundreds of people gathered in New York City’s Union Square for a rally and march in support of free and fair access to abortion. The rally was in repudiation of Texas’s SB8, a bill which, as of September 1, bans all abortions after 6 weeks. Even more grotesquely, the bill deputizes private citizens as vigillante enforcers, offering a $10,000 bounty for turning in someone who gets an aboriton after this period, or anyone who aids such an abortion, from doctors and nurses to rideshare drivers and family members.

Our action in New York was the first protest in the city against SB8. Called and led by Left Voice, the rally was co-sponsored by Red Bloom, Tempest, the DSA Socialist Feminist Working Group, Party of Socialism and Liberation, Freedom Socialist Party, Radical Women, New York City for Abortion Rights, CUNY Rank and File Action, Natioanl Women’s Liberation, and the DSA Afrosocialists and Socialists of Color caucus, and attended by a contingent from the Internationalist Group.

“Pro Life? That’s a Lie! They don’t care if people die!” the marchers chanted. We marched down Broadway, completely blocking car traffic, taking the street as people on the sidewalk clapped in approval.

As Angelique Saavedra, an nurse practitioner and abortion provider explained, “As a kid growing up on the border city of El Paso, Texas, I remember the prevalent anti-choice Catholic conservative messages regarding abortion, but the hypocritical silence around the misogynistic femicides of working class women in Juarez, Mexico, many who worked at maquiladoras—or factories owned by U.S. corporations is a product of U.S. capitalist imperialism.”

She went on to explain, “Conservative capitalist politicians love to claim the title of pro-life, but I have seen how abortion saves lives. Whether it’s someone who needs an abortion because they are trying to escape an abusive relationship, or someone who is desperately trying to put food on their table for the current kids they have: the fact is that safe abortion saves lives.”

The protesters were keenly aware that this is not just a Texas issue. The Supreme Court is poised to hear a case that could overturn Roe v. Wade, undermining the right to an abortion everywhere.

Speakers pointed to the need to not only defend Roe v. Wade, but to fight for free, public healthcare. People chanted “Abortion is healthcare and healthcare is a right.”

Left Voice’s Sou Mi explained, “We can’t leave the decisions regarding healthcare to a state that strips us of our rights. Or trust the leaders in Texas, that is banning the right to abortion, to make decisions of our healthcare. We need a healthcare system under the control of workers and patients, because, as we’ve seen through the pandemic, they’re the ones best equipped to make decisions about public health, not the bosses or their government.”

Protesters wore green bandanas, positioning themselves in the tradition of the Latin American abortion rights movement. In Argentina, millions took the streets wearing green bandanas, wining the right to an abortion in a country which is largely Catholic. In Mexico, the green bandana movement has increasingly been taking to the streets in the past few years.Nearly all the speakers highlighted that the Supreme Court cannot be trusted to defend abortion rights. Tatiana Cozzarelli, of Left Voice, acting as the rally’s MC, said  “Nine unelected assholes on the Supreme Court upheld this wild and absurd law. But it’s not surprising, because the Supreme Court isn’t unbiased. It’s the highest court of the racist system, and it’s a weapon against the working class and oppressed people. It’s meant to uphold the racist, capitalist system.”

Many also highlighted how the Democrats use the issue of abortion to get votes, but have no interest in defending abortion rights. Sherry Wolf, author of Sexuality and Socialism and a member of the Tempest Collective, stated

There is a notion among many of our friends, co-workers and classmates that things won’t go backwards under the Biden administration, like a dead man’s switch clicks and stops shit from getting so bad. Well if the last 19 months have taught us anything is that this system does not have a dead man switch. We are going backwards, and we will go backwards if we do not organize and do not fight regardless of who is in the White House.

We are going backwards without a fight and they will preside over it and say pretty words. And they will do with a multi-culty rainbow flag to wrap it up. We cannot rely on anybody. Even the Supreme Court, in the 1980’s said ‘we are in danger of losing legitimacy in the eyes of the public if we reverse Roe v. Wade.’ How would they know that today if we are not out here in huge numbers?

Nobody is coming to save us but us.

While this was a first protest to respond quickly to the erosion of reproductive rights in Texas, people spoke about the need to mobilize on October 2, the protest currently called by the Women’s March. Yet, speakers were critical of the strategy of the non-profits and reproductive justice groups tied to the Democratic Party.

Haley Pessin of Tempest explained “For way too long, the dominant strategy of these groups has not been to mobilize their base for a full-throated defense of abortion, but to fight primarily through the courts, through lobbying, through fundraising, and worst of all, downplaying the centrality of abortion rights to women’s and gender liberation, not saying the word abortion — but none of that has been enough to stop the right’s assault on reproductive rights..  We’re here to fight back!”

She said, “In my union we just passed a resolution in support of the Palestinian people, which sparked a lot of conversation, not just about that topic, but also about what the role of unions should be. And it is our business to support people in other places. And I say ‘Yes! Of course it is!’ I refuse to choose between supporting my colleagues and supporting workers around the world. I do both, always… If you are in a workplace like me that is unionized, I encourage you to talk to your co-workers about how you can do things like support abortion rights. And if you are not in a unionized workplace, you don’t need a union to talk to your co-workers about justice.”

In that spirit, speakers proposed a left contingent for the October 2 rally. If you are interested in helping to organize, please email us at [email protected] or fill out this form.

Our fight is not a local fight, It is international, and therein lies one of our greatest strengths. We are not in this alone. From Ireland to Argentina to Mexico, millions took to the streets and won.

Enough with appealing to the goodwill of our oppressors. It’s time for us to take to the streets and fight back