‘Free Speech’ for the Alt-Right?

This past November, the Alt-Right held a protest for “free speech” on Boston Common, with the moniker “Rally for the Republic.” 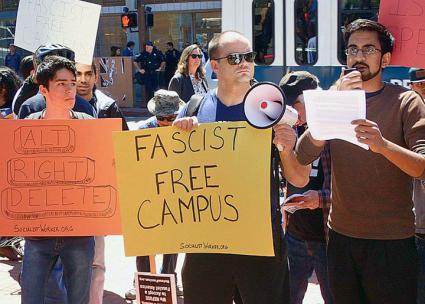 This was the third recent rally held by the far right on the Common and one of a number of similar actions held in the New England region since Trump became president. The rally was designed to be a provocation against liberals and the left with the implication that the leftists, specifically Marxists, try to curb the freedoms of right-wingers. These rallies are the Northeastern version of the various provocations billed as assertions of freedom of speech, like those held last in the spring and summer in Berkeley and the murderous provocation in Charlottesville in August.

What is “Freedom of Speech”?

The meaning and use of the concept of free speech has been complicated and contested throughout U.S. history. Many Americans would say that “freedom of speech” is one of the rights guaranteed under the First Amendment to the Bill of Rights. However, when it comes to criticizing powerful economic interests or the interests of the ruling class, freedom of speech has very often been sharply curtailed.

This is not surprising. Marxists argue that rights and the legal process do not exist as an abstraction but are embedded in the material conditions of society and reflect the balance of class forces at any given time. From 1908 to 1916, the Industrial Workers of the World, whose members were known as the “Wobblies,” waged a free speech campaign in mining, lumber and agricultural gateway cities, mostly in the western U.S. Soapbox speakers would speak out against local corrupt employment agencies, or “job sharks” and other local businesses which pocketed a large chunk of workers’ wages. This was met by very brutal crackdowns by government authorities, with at one time over 5,000 Wobblies being arrested and held in sometimes horrific conditions. Government authorities only relented after the extent of the crackdown began to tax local resources and generate bad publicity, allowing Wobbly speakers to continue their activism.

Later, the college campus protests for civil rights and against the Vietnam War were ignited by the 1964-65 Berkeley Free Speech Movement (FSM). The FSM largely emerged from the Civil Rights movement and began as a movement to acknowledge students’ right to engage in political activities on campus, which had been subjected to a draconian ban. Student activists were influenced by socialist and New Left thinkers such as Hal Draper and William Appleman Williams. These brave student activists faced severe crackdowns and mass arrests. At one point, 800 students who had been occupying an administration building were arrested. The students fought back. Some 3,000 student activists blockaded a police car ready to transport one student to jail; they made speeches on top of the car and prevented it from moving for 32 hours, until the charges were dropped. This and other mass protests forced university authorities to gradually back down and allow a diversity of political activity on campus. Berkeley became a focal point for campus activism and set an example that spread to colleges and universities across the U.S. during the mass opposition to the Vietnam War.

The struggle for free speech rights continues today with recent issues such Google de-listing leftist and alternative websites, the end of net neutrality, the moves by politicians of both parties to criminalize the BDS movement and all criticism of Israel, and the partial suspension from teaching duties of the leftist academic George Ciccariello-Maher by Drexel University under pressure from the far right.

The capitalist establishment is flexing its muscles against the open exchange of ideas. In the U.S. today, five media conglomerates control 90 percent of all media outlets. Within corporate media, there is a near uniformity of views on foreign policy and international affairs. Very little publicity is given to the U.S.-supported and aided Saudi war against Yemen, a country now faced with a horrific humanitarian crisis. There are near total media blackouts on popular mobilizations against the interests of the ruling class such as West Coast dockworkers strikes or the 2012 Quebec student protests. Domestic issues are discussed and debated, but along very narrow and partisan Democratic/Republican lines. Third party candidates are frozen out of debates and are virtually ignored by the media. Other voices can be heard on leftist and alternative media outlets such as Democracy Now! or Real News Network, but these often operate on a shoestring budget and are under constant attack. In a situation like this, can a “free press” be said to exist in any meaningful way?

What Free Speech Means for Fascists

The recent use of the concept of free speech by the alt-right however is not concerned with the historic working-class struggles of the past or the more recent issues around corporate control over our lives. The alt-right use of the term comes out of debates surrounding campus appearances of far right figures like Milo Yiannopoulos. Right-wing speakers were never interested in debate or dialogue but rather in incendiary provocations of liberals and the left. Yiannopoulos, at a December 2016 appearance at the University of Wisconsin, mockingly outed a transgender woman, publically placing her in a dangerous situation. As a result, mass protests shut down his scheduled appearance at Berkeley University in February of this year, where he was widely believed to have been planning to reveal the identities of undocumented and transgender students. It was in the interest of protecting threatened communities that Antifa and other activists shut down his appearance. The far right idea of the “intolerant left” came out of protests against Yiannopoulos and the cancellation or rescheduling of other such incendiary speakers.

The alt-right’s use of the term “free speech” of course belies any actual concern with freedom for marginalized voices. Rather, the far right attempts to confuse and disorient people otherwise opposed to its ideas and to act as a possible wedge issue to normalize hate speech-homophobia, transphobia, ethno-nationalism, racism, and fascism in public discourse while at the same time ironically portraying the left as “intolerant.”

This was on display at the November 18 rally in Boston. The primary organizers were an ad hoc mashup of alt-right activists under the name “Resist Marxism,” which claimed to be organizing against the “extreme hostility towards free speech” by left organizations like Antifa and Black Lives Matter.”

Fascism, and the alt-right grow in situations where capitalism is in crisis, mainstream leaders and parties provide no way out, and people are open to easy answers. These answers are often enforced, and therefore validated, through the use of the police.

Fascism blames and targets the most vulnerable — the disabled, LGBTQ people, ethnic minorities, refugees — along with leftists. The act of publicly appearing as a fascist, supporting a regime which carried out mass ethnic cleansing and extermination campaigns, is itself an act of violence and is threatening to targeted minorities. The liberal “marketplace of ideas” does not apply. Fascism is like a virus and cannot be allowed to develop roots in our communities. Socialists have historically supported a “no platform” policy for fascists.

Various police forces have been mobilized (or have mobilized themselves) to protect fascists’ “right to free speech” throughout history, but have brutally engaged in the repression of those fighting against fascism. Many police sympathize with the racist, far right and fascist ideas that grow out of these movements, and it is up to the Left to fight back against both the fascists and their state-funded sympathizers.

An example would be the 1936 Battle of Cable Street in London. The British Nazi, Oswald Mosley, and the British Union of Fascists planned to send thousands of marchers, dressed in Nazi Blackshirt garb, through a Jewish neighborhood in the East End of London. (This was a few years before the start of the Second World War and the Nazi Holocaust.) Over 100,000 area residents petitioned the British Home Secretary to ban the march on the grounds of the likelihood of anti-Semitic violence resulting from the march, but to no avail. Instead the Home Secretary sent police protection to the fascists. About 20,000 anti-fascists, area residents and leftists set up street barricades and fought street battles with about 3,000 fascists and about 7,000 of their police protectors. After hours of street fighting, the fascists were turned back and dispersed.

The Battle of Cable Street is considered today to have been a historic defeat for fascism in pre-WWII Britain. By 1936, after a prolonged period of capitalist crisis, fascists had come to power in Italy and Germany, with a confused or ineffective response from the Left. Fascists were fighting a vicious civil war in Spain to destroy democracy and the gains of the Spanish working class. Leftists and a persecuted minority defended themselves and fought back, inflicting a severe defeat on Mosley and his followers. The BUF, which had sympathizers in the British ruling class and even had police protection at Cable Street, was demoralized and the movement dwindled. While the current situation in the U.S. is not yet as dire as it was in Europe and Britain in the 1930s, Cable Street shows the direction things could move in, while outlining an effective response.

In Boston, the organizers of the “free speech” rally did not get a police permit to hold the rally, with authorities citing a marathon in the area scheduled for earlier that morning. The organizers held the rally anyway and seemed to receive heavy police protection. My estimate was that, between Boston Common and the surrounding streets there were between 800-1,000 cops.
While the alt-right demonstrators were protected by police, the anti-fascist counter protestors were not as fortunate. Three left activists were arrested. A crowd surrounded the cops, who had grabbed and detained one anarchist activist, and began chanting “Let him go!”“Free our comrade!”. After the cops carried him away, in what looked like a large phalanx, the crowd then shouted at the police, “Who do you protect? Who do you serve?,” bringing to mind the Marxist view of the police as part of the “special body of armed men” who exist to preserve capitalist property relations.

In the three Boston rallies, the right was outnumbered (and in the November Boston rally, far outnumbered) by counter-protesters. This shows that, at least in New England, the alt-right is very far from having established any sort of mass base and that people can be effectively mobilized to block its growth. To do so, it’s important to draw on lessons from historical experience, such as the Battle of Cable Street, and understand the historical relationship of police and state security to the far right wing and fascism.

The lessons of history can help us avoid the misuses of terms like “free speech” by the alt-right and shows us that the fight for free speech rights have been rooted in struggles of the oppressed that have been opposed to fascism and anti-democratic and inegalitarian forces.