Speaking at a November 24 campaign rally for Anasse Kazib, the revolutionary rail worker running for president of France, a hospital laundry worker and local trade union leader makes a compelling case for nationalizing healthcare under the control of the workers who provide the actual care and services in hospitals, clinics, and elsewhere. 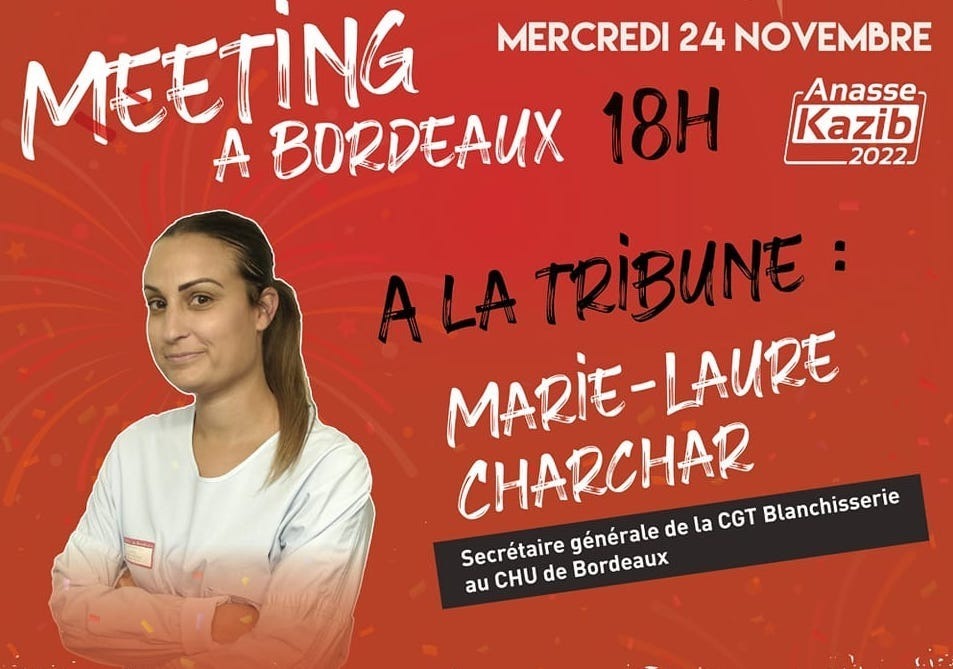 My name is Marie-Laure Charchar. I have worked in the laundry at Bordeaux University Hospital for more than 15 years. I am 34 years old, I have two children, and I am the general secretary of the CGT laundry union at my workplace. I joined Révolution Permanente during the health crisis.

As you know, the pandemic has been a brutal assault on all of us. For those of us working in hospitals, it has been extremely grueling. We were not able to quarantine — just like millions of precarious workers who work in distribution, transport, and maintenance, who are essential to the functioning of society, and who were seen piling into buses and subways at the risk of their lives just to go to work. Tonight, at a moment when we are entering a fifth wave of the virus, it is to all these frontline workers that we pay tribute.

We also pay tribute to the thousands of dead and their relatives.

We did not have enough respirators for all of the patients, which forced caregivers to decide who would be on oxygen and who could not. This happened in a wealthy country — the world’s fifth-wealthiest — where 100,000 hospital beds have been eliminated over the past 20 years. How many deaths would we have avoided if hospitals had not been run on the basis of profit these last decades?

My hospital has more than 140 professions. We are like a city within the city. We all know about the nurses, but there are also cooks, logisticians, gardeners, pharmacy assistants — I can’t mention them all. And there are the laundry workers, like me. The laundry is like a factory within the hospital. We take care of all the laundry for every one of the University Hospital’s sites: sheets from patient beds, staff clothing, and so on. We handle 13 tons of it every day, in a noisy environment where the decibel level reaches that of a disco. It’s hot in there. And we live in a state of danger: because of a shortage of maintenance staff, the machines don’t get cleaned enough, dust can accumulate, and the place could burn down. We’ve had two fires in the last five years!

Ours are days of repetitive motion. Many of my co-workers have developed asthma from the dust and joint problems such as tendonitis and arthritis — which are not recognized as occupational diseases.

Then there is all the depression and burnouts, resulting from tyrannical management — which even led one of our co-workers to commit suicide! A court had granted her only Wednesdays to see her son, but the bosses would never give her Wednesdays off work.

It’s no secret that these sorts of working conditions only worsened with the health crisis. Even though hospital workers have been feted as “heroes,” and were even given medals on July 14 (Bastille Day), those “thanks” faded away quickly. After the demonstrations in June 2020, the government was forced to pivot and created the Ségur de la santé healthcare roundtable. But it should be called the “healthcare masquerade”: some workers in our sector got a monthly wage increase of 183 euros, but not everyone!

At my hospital, those of us in the laundry are the only service workers who got the bonus — because we fought for it. We went on strike, despite being “assigned” workers. This is a characteristic of public service work: we have many obstacles to the right to strike, based on being “assigned” to fill the need for continuity of care. But in reality, we are so understaffed that we are already working at minimum service, which makes it impossible to strike and fight to defend our working conditions and quality public service!

In spite of everything, Health Minister Véran recently repeated that we should be deprived of the “leisure to strike.” He thinks losing money and getting gassed and beaten by the cops is fun for us! No, sir! We’re fighting for new hires, so you can no longer take away a single bed!

But if all we’ve managed to get so far is crumbs, as I said, it’s not for caregivers’ lack of combativity. It’s because of the union leaderships and their policy of negotiating misery. These bureaucrats are more interested in organizing elections for union positions than in preparing the struggle on the ground to win better working conditions and quality public services.

Since September 15, several thousand healthcare workers have been suspended because they haven’t been fully vaccinated. The catastrophic management of the pandemic has had a real impact that has led some hospital workers to refuse to be vaccinated. As a result of this mismanagement, our co-workers have gone without pay for two months.

Confronting the same thing, our colleagues in Guadeloupe, with all the workers, have begun a general strike on the island to oppose the government’s authoritarian policies not only about health but also social issues. In the West Indies, the high cost of living persists, and has continued since the great general strike in 2009. This has expanded to Martinique, too. We stand in solidarity with their struggles, and hope that the winds of revolt make it here to France itself!

There is no lack of reasons to revolt. While Macron boasted in his last speech that he had invested 19 billion euros in health — claiming it’s the largest amount since the Social Security system was created in 1945 — it’s a complete lie. He failed to mention that it’s not at all an investment. A lot of it is just paying the expenses of the health crisis.

In contrast, a survey just a few weeks ago revealed that another 20 percent of the beds in university and regional hospitals have been eliminated because of a personnel shortage!

For years, scientists have been warning about the risk of pandemics developing, especially respiratory ones, but instead one government after another chooses to cut hospital budgets.

The same goes for vaccination. With the pandemic once again on the rise, we must demand that patents are lifted so that people in every country of the world can have access to the vaccine. It is wrong that in the midst of a global pandemic, the health of millions of people — especially in poor countries — is subjected to the competition and commercial interests of a handful of pharmaceutical companies.

Because we have no confidence in those who sell and trade our health, we demand the nationalization of the entire health sector and pharmaceutical industry, without compensation, under the control of the workers — who, along with patients , are the only ones who know the reality of what is needed.

So far, I’ve been telling you about my workplace — the hospital — as if we women had only one place of work. But while a small handful of company executives get to leave their offices each evening and go home to their leisure activities — swimming, the gym, the theater, whatever — we are millions of working women who, when we go home, still have to tend to domestic chores, children, and in some cases a relative who needs care.

After a full day’s work, we continue to work for free so that we and our husbands can go to work the next day, and so that our children are healthy enough to go to school and prepare themselves to be the workers of tomorrow. This work is essential to the functioning of society, but it goes unpaid. We want more time for our children, our families, and our own leisure!

That’s why we present the candidacy of our comrade Anasse Kazib, a rail worker from a working-class neighborhood, who stands out from all the presidential candidates supported by the billionaires.

Anasse has been there through all the struggles. He stood against the reform of the Labor Code in 2016. He’s part of the struggle against police violence. He’s with the Yellow Vests, and the defense of our pensions.

In 2022, we want a candidate who comes from our class and represents our struggles, who in these elections can be the voice of the voiceless. But this candidacy is not just about 2022. We want to build a revolutionary party of the working class and fighting unions that refuse to negotiate with the government for crumbs.

An independent organization of workers, including doubly exploited women, and of youth will give us the means to defend our gains and fight for a society without exploiters or exploited — a society in which we, working people, make the decisions. That is what Anasse’s candidacy stands for. We invite you to take part in this campaign with us.

First published in French on December 1 in Révolution Permanente.