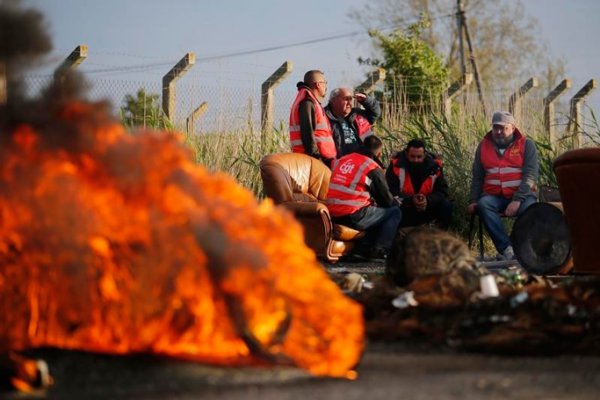 Oil workers spearheaded the strike, followed by truck drivers and later, workers at the nuclear plant. On May 26, several private sector industries went on strike, such as the workers of the DCNS nuclear submarine producer and Amazon, with the Peugeot Mulhouse plant taking the lead. This is not a general strike, but is potent and expanding into other areas of industry, with strength stemming from its effects on strategic sectors: ports, energy, etc.

This week, transportation workers joined the strike: starting on Tuesday, the CGT labor federation and other railway trade unions called for an open-ended strike. Since then, the largest garbage processing plant in Europe has been at a standstill. On Thursday, urban transportation workers in the Paris region will do the same. Air France pilots are starting a six-day strike this Saturday, and dockworkers throughout the country have also announced they will join the strike.

Since the 2010 defeat in the struggle against the increase in retirement age, unions and the working class have failed to coordinate and advance a mass struggle, despite many partial conflicts revealing discontent among workers. Hollande’s labor reform was the straw that broke the camel’s back and crystallized the diverse inlets of discontent against the current anti-worker and repressive government.

This is the first struggle against a government that has stolen the name of the Left, making it a historic strike that marks a break with Hollande and possibly the French Socialist Party (SP) by the left. Perhaps the SP of France will end up like the PASOK in Greece, although the economic and social crisis in France has not reached the magnitude of that in Greece.

Regardless of the final outcome, what we are seeing today is a battle with the potential to open a new cycle of class struggle in France and Europe.

Belgian railway workers are already confronting the government’s attempt to pass a labor reform like the one in France. It is essential that Left Voice readers and left activists follow this struggle, since it is the most important and protracted workers’ fight in a central country such as France–the world’s fifth imperialist power–against the lingering aftermath of the 2007/8 global economic crisis.

An outcry against unbearable working conditions

Behind the mobilizations against the labor reform, there is early and increasingly evident insubordination by workers, with roots that run deep into France’s history–back to workers’ resistance and a wave of factory occupations that came to a head in May ‘68 as a result of the iron-first rule of French capital. The bosses’ response to this worker rebellion at the heart of the production process was a policy of systematic individualization of waged laborers’ contracts. This shift led to the deterioration of working conditions.

Labor specialist Danièle Linhart states, “[The deterioration of working conditions] is characterized by an intensification of work, the establishment of harder and harder individual goals, the requirement of following procedures, protocols, ‘good practices’ (determined by experts from international boards, far from the reality of those who do the concrete work), and a disqualification of workers’ experience as a natural result of the policy of endless change.”

Today, these struggles at work fuel the combativeness and determination of the strikers who have been opposing the labor reform for months. However, suffering at the job does not always lead to resistance. In times of social peace, this sentiment finds expression in increasing alcohol and use of psychiatric drugs or more tragically, in the growing wave of suicides that has shaken several of the largest companies for years. Today, workers are starting to rebel in an increasingly conscious way against this managerial vision of work with more requirements and less freedom imposed during the heyday of neoliberalism in France and worldwide.

The Hollande-Valls government’s unprecedented fall in popularity and weaknesses make for favorable conditions for striking workers. Despite the losses and general inconvenience caused by the strike–despite the constant efforts of authorities, mainstream media, and bosses (MEDEF) to demonize the strikers by labeling them “terrorists and bandits,” and accusing them of hijacking the French people, the public and the left in particular still firmly oppose the labor reform. This firm opposition has reached great heights among the left electoral base.

However, a limitation of the current strikes is that this passive support has not transformed into a generalization of actions across trade sectors. This limitation is due in part to the CGT’s reluctance to advance a broader program, beginning with the fight against the labor reform, but going beyond it to fight against current working conditions, precaritization and unemployment. Such a program could unleash the energy and combativeness of the most precarious sectors within the proletariat and the poor, such as the youth living in the banlieue, a poor neighborhood in the outskirts of Paris.

The leadership of the CGT refuses to call for such a fight–which could have a revolutionary dynamic–while at the same time, the union bureaucracy maintains control of the movement. The reformist leadership of the French labor movement is hoping to exploit the government’s conjunctural weakness and escalate the pressure for Hollande to cave, just a few days before the UEFA Soccer Championship is to take place in France. Although the possibility for concessions cannot be ruled out, a retreat by the government is something that French capital is not willing to accept. Furthermore, Hollande and Valls have practically liquidated all their previous support within a “progressive” constituency, so no great political gain can be expected by such a maneuver.

CGT’s approach could then prove insufficient. For this reason, workers and youth should not simply get involved in this great standoff against capital and government, but become the leadership in and of themselves, through the building of their own self-determined, combative organizations.