The following statement was written by Courant Communiste Révolutionnaire (CCR), a group within the NPA in France. It was published on December 5. 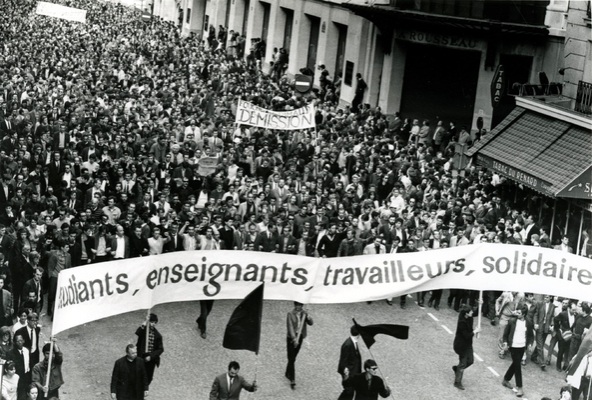 Since the uprising against French President Emmanuel Macron and his ilk began, the situation has changed dramatically. To the rallying cry “Macron, resign!” has been added the call to arms: “Tous ensemble!”—everyone to the streets!

A Crisis at the Top

Never in such a short time have we seen a president become so weak and unpopular. Those in power are becoming increasingly isolated. Not only have the Yellow Vest protests retained popular support for their struggle, the government also remains politically unstable—as shown by the cessation of meetings between Macron’s prime minister, Édouard Philippe, and opposing parliamentary forces. Everyone–even Macron himself–is trying to distance themselves as much as possible from Philippe. Finally, the executive branch has been very much weakened, as shown by its difficulty maintaining order not only in Paris but also in a dozen smaller cities.

It is the above factors, combined with the onset of the youth movement on Monday, December 3, that reflect pre-revolutionary trends in the French situation today. This is a matter of concern for mainstream media; so much so that reporters have started to speak of an “insurrectional situation.” The fact that the media is presenting a dark, threatening picture of events—aiming to frighten undecided or ostensibly neutral parties—demonstrates how “extraordinary” the situation is.

Having felt the winds change, most politicians no longer enthusiastically support the government, except for a few within Macron’s inner circle. We are far from the time when the government of “Philippe the First” (referring to Prime Minister Phillippe) was acclaimed by the National Assembly and had the more or less tacit support of a range of forces from the Socialist Party (PS) to the right. And yet, only eighteen months have passed.

Even the “constructives”—a group of congresspeople from the center and the UMP (Union for a Popular Movement, now renamed the Republicans), who turned to support Macron after his victory in 2017—demand an expansion of the government so that Macron can buy some time. On a more radical note, the National Rally party of Marine Le Pen, the worst enemy of workers (and a staunch opponent of increasing the minimum wage) and, on the opposite end, France Insoumise, are both demanding that Macron dissolve the National Assembly. Meanwhile, Socialist Party’s Benoît Hamon is calling for a “Sixth Republic.”

Against Maneuvers and Recovery

Macron’s announcement that he will suspend certain proposed tax increases has done nothing to extinguish the movement. For right-wing and left-wing politicians who have been in power for almost 40 years, the risk is that pushing Philippe out of office will not be a lasting solution. It amounts to going back to the polls and making a few small reforms so that nothing really changes. As for pushing Macron out, nobody thinks seriously about it. Yet this is the goal that the Yellow Vest movement increasingly advances with the slogan “Macron must go!”

This is where the current movement comes up against its main limitations but also poses a number of questions. On the one hand, even if, locally, many organized sectors of the labor movement, local unions, CGT Union Locale and even CGT Union Départamentale converge with the Yellow Vests and vice versa, this is a trend that is still too uneven territorially. The national leaderships are doing nothing to move toward converging with, extending or coordinating the movement. A particularly illustrative example is the CGT, which on Wednesday called for a day of action on December 14, but without a call to strike and without building up the mobilization amongst the rank and file.

The only way to actually depose Macron would be to obstruct the country’s economy, which cannot be done from the outside. It requires millions of workers to strike, a real general strike, like in 1968. Combative unions and Yellow Vests should therefore demand or even impose this perspective on the trade unions’ national leaderships, starting with the call for a full day of general strike coinciding with the Yellow Vests’ action on December 14.

One of the most striking features of the Yellow Vest movement is that, in addition to the desire to depose the president, it raises questions about the very purpose of the institutions of the Republic. Thus we have seen the emergence of demands such as the abolition of the Senate, the reduction of the number of deputies and their salaries, the organization of popular referendums, etc. Some seek to respond to these democratic aspirations with parliamentary maneuvers, such as the request for a simple dissolution of the Assembly by Le Pen or Mélenchon, or the fuzzy dream of a Sixth Republic.

As revolutionary Marxists, we aspire, on the contrary, to overthrow the entire state and replace it with a workers’ government, supported by their own organizations of struggle and bodies of self-organization. We thus seek to build action committees, which build rank and file control of the current movement and also form the beginnings of an alternative power to that of the capitalists.

Since this perspective is not posed for the immediate future, we are prepared to defend, alongside the movement of Yellow Vests, a radical democratic transformation of institutions, inspired by what was accomplished by the Convention of 1793 or by the Paris Commune.

In addition to eliminating the reactionary Senate and presidency, we should end the separation between legislative and executive powers, a division that only strengthens Bonapartist power. Here is what the revolutionaries proposed in France in 1934: “A single Assembly concentrating the legislative power and the executive power. Its members would be elected for two years, by universal suffrage since the age of eighteen, without distinction of sex or nationality. The representatives would be elected on the basis of local assemblies, constantly revocable by their constituents and would receive during the time of their mandate the income of a qualified worker.” (Trotsky, 1934).

This step would give a tangible outlet to the democratic aspirations of the movement, at the same time that this wider democracy would facilitate the struggle for a workers’ government, which could open the way to another society, without any form of exploitation or oppression.

Today, the Yellow Vests and those supporting them, whether organized in unions or political organizations, could have the power to turn the tables. To do this, we must give ourselves the means and ensure that, once reversed, we ourselves can create and impose the rules of the game.