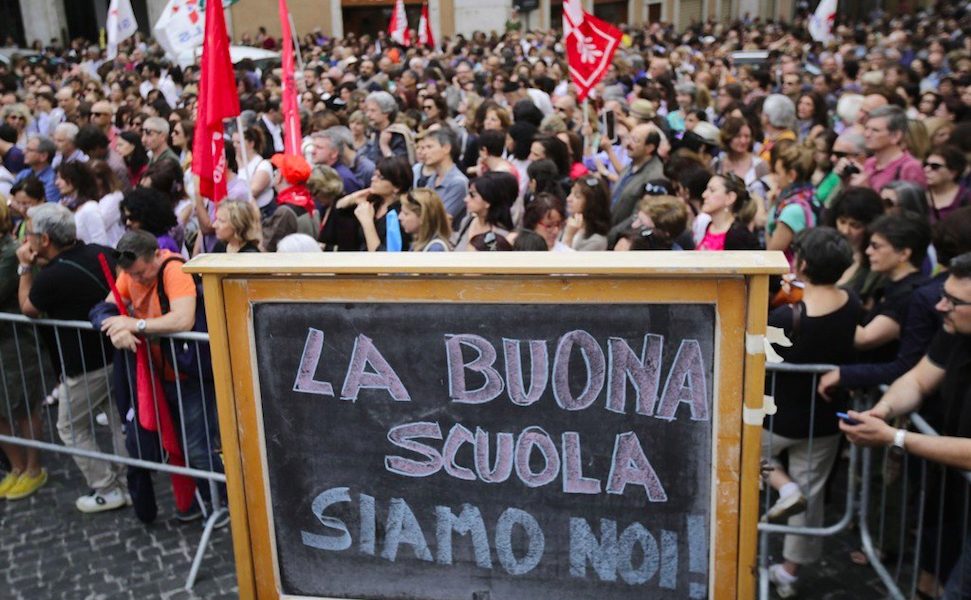 This is a translation of an article originally published in La Izquierda Diario México.

On November 13, the main streets of Italy were filled with people demanding an end to the government’s imposition of the “Buona Scuola” (Good School) education model through its reform measures.

There were violent clashes between police and demonstrators in Naples and Milan. An 18-year-old student and a teacher were injured in Milan, while two youth were injured in Naples. According to local media, the resistance left four police officers wounded.

We, the Nuestra Clase grouping in Mexico, repudiate the violent repression of Italian teachers and students. We salute their fight for public education and the basic rights to autonomy and freedom of expression. The law was passed by the House of Representatives with 277 votes in favor, 173 against, and 4 abstentions. Four opposing votes and 3 abstentions came from parliamentary members of Rienzi’s Democratic Party (PD).

In Turin, demonstrators repudiated the poll, burning a PD flag outside an executive delegation. The demonstrations were supported by the Cobas, Unicobas, Cub, and Anief trade unions because the reform “exacerbates rather than resolves the problem of education.” This detrimental law caps the number of teachers under contract to 100 thousand, leaving the rest without employee rights. In addition, teachers can be hired directly by the head school teacher.

Teachers claim that the law seeks to “discriminate and divide” education workers, creating first– and second–class schools through private funding channels. They say this law is an attempt to convert schools into enterprises. Students are united with teachers in this fight because they know that this is an austerity policy imposed by the European Union.

International financial institutions are behind the programs that eliminate public education and create cheap labor to keep the vast fortunes from the world employers in association with the governments that kill, torture, rape, and disappear the people who fight for our rights.

We teachers organize ourselves in Mexico in order to throw out the education reform imposed by the OECD and Mexican President Peña Nieto’s government by establishing a baseline of fear, locking us up, trampling our rights, through rape and even death. We send an international salute to the struggle of the combative teachers and students of Italy, sure that the unity of the working class in our own countries and around the world is the key to victory.

Our working class solidarity extends from Mexico to Italy.

Down with the education reforms!

Long live the fight for education!

With information from HispanTV and Desinformémonos