From One Essential Worker to Another: Demanding Safe Working Conditions Could Save My Life

The walk-outs, die-ins, and strikes workers are undertaking around the country to fight for better working conditions or closures are one of our best defenses against the outbreak. One New York City nurse speaks out about the importance of these struggles and the combined fight of all essential workers, from healthcare to logistics sectors. 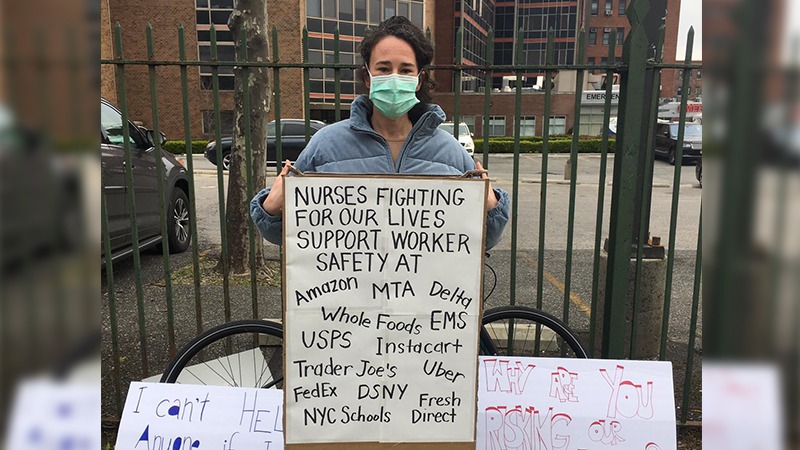 The media has been saying that healthcare workers are on the “front lines” of the battle against COVID-19, but at work I’ve often felt like we are the final line, battling the enemy as it climbs over the walls of the fortress. The essential workers at the grocery stores, the delivery companies, the factories, the distribution centers — those are the true front lines of this pandemic, the soldiers in the war movies who run into battle on foot as horsemen with spears charge their defenseless bodies.

Since stay-at-home orders proliferated across the country, many Americans are home with their Lysol spray and Zoom meetings while essential workers are exposed every day to the virus, often in unsafe, unsanitary, and cramped working conditions, contracting the virus and then spreading it to their families and other people in the community. Rates of infection in areas around meat packing plants, for example, are 75% higher than other American counties.

Protecting the safety of those workers exposed in the communities is more effective than what we can accomplish at the hospital. We can fight the virus with high flow oxygen, ventilators, and the most evidence-based medications possible for a months-old disease, but our efforts are often in vain. New data from Northwell Health shows that 88% of those placed on ventilators in New York have died (not including patients that remain hospitalized).

While Governor Cuomo refuses to cancel rent in New York and healthcare continues to be entangled with employment, essential workers are being put in the position of choosing between their lives and the roof over their heads, or their health and their health insurance. In the Midwest, President Trump has ordered meatpacking plants to remain open using the Defense Production Act (which nurses have been imploring him to use to produce more N95 masks) without providing any stipulations for increased safety measures. Meanwhile, if an essential worker quits, they cannot collect unemployment, which for many “essential” workers would reap more income than their labor.

It is clear that the government will not protect the working class. Instead, essential workers are forced to protect themselves, and in turn they are protecting everyone.

When Amazon workers demand that their facility be shut down for sanitation, they become healthcare workers.

When Instacart workers walked off the job to secure rights to face masks and hand sanitizer, they became healthcare workers.

When Walmart workers, reeling from news that two have died at one Chicago location, launched a worker-led system to track cases of the virus amongst employees and anonymously report working conditions, they became healthcare workers.

When MTA workers risked punishment to place duct-taped barriers between themselves and subway riders early in the pandemic, they became healthcare workers.

When Whole Foods workers call out sick en masse to demand sick time for self-isolation and the closures of stores with positive cases, they are healthcare workers.

When workers at Smithfield pork plant where physical distancing is nearly impossible walk out to protest Trump’s executive order that their plant remain open, they are healthcare workers.

An essential worker who demands good working conditions could save my life. I stand by them so I don’t have to save theirs.