From the U.S. “War on Terrorism” to Anticipating Conflict between World Powers

A departure from decades-long US policy reframes global instability outside of the terms of terror and opens a penumbra of new geopolitics. 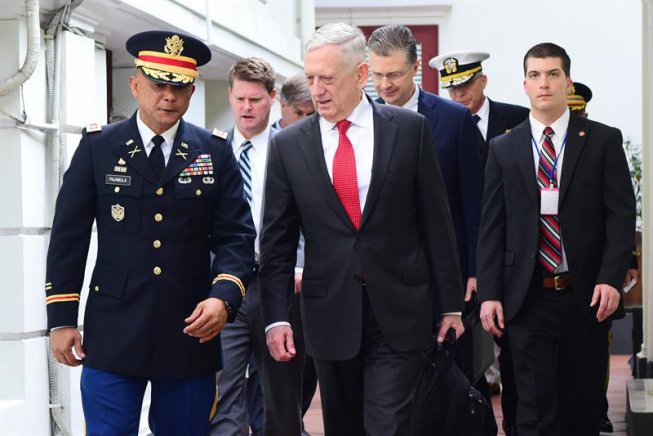 “Inter-state strategic competition, not terrorism, is now the primary concern in U.S. national security.” This quote summarizes the content of the document released in mid-January and written by current U.S. Defense Secretary, retired four-star general James Mattis. This likely the biggest shift to date in the Trump Presidency.

There are two iterations of the document, “Summary of the 2018 National Defense Strategy of the United States of America: Sharpening the American Military’s Competitive Edge,”. One is an 11-page version for the public, and the second a classified 50-page one for Congress. It is the first report of its kind to be issued by the Pentagon in the past decade. Along with the National Security Strategy announced by President Trump in December 2017, Defense Secretary Mattis’ document places China and Russia at the heart of the U.S. strategic concerns.

In this context, the document defines three spheres of conflict: the“Indo-Pacific” (China); Europe (Russia) and the Middle East (Iran), where military resources will supposedly be concentrated. Africa and South America are secondary concerns.

What’s new is not the threats to U.S. dominance themselves, but rather their order: China, Russia, North Korea, Iran, and lastly, terrorism. China has ascended to be of the highest concern. Unlike Russia, whose extensive geopolitical role is inherited from the Soviet Union, China’s international (and military) expansion, announced at the CPC Congress held last October, is closely connected to the strength of its economy.

The President is highly influenced by the military sector, giving the Trump administration its Bonapartist nature. Mattis, who has important weight in the government, justifies this change on the grounds of two central arguments.

The first argument is based on Trump administration’s objective assessment of a weakened, volatile international order that is hostile to U.S. domination and hegemony. Among all of the threats the U.S. faces, the most significant is the reemergence, in the long term, of competition with the so-called “revisionist powers” (primarily China and Russia, followed by lesser-ranking powers such as Iran). These countries are characterized as revisionists due to their attempt to “revise” the world order established by the triumph of the U.S. in the post-Cold War.

These countries do not accept this arrangement, but do not (yet) have the strength required to drastically change it. As a result, they have focused on US flanks by intervening in regional situations in which the U.S. once held influence. The “Russian pax” in Syria is an example of this. In their accumulation, these changes in non-central scenarios could produce significant changes in the international situation as a whole.

The second argument is of a somewhat subjective character. It is related to the self-perception of U.S. imperialism and its global position– a kind of acknowledgement of the decline in U.S. hegemony. It is important to note, however, that the “America First” sector is in power, not the “declinationist” sector. According to General Mattis, the U.S. is leaving behind a period of “strategic atrophy” in which its competitive military advantage has been eroded.

While repudiated by China and Russia internationally, this shift is well-received on the domestic front. This is especially true of the “realist” sector of the state bureaucracy, which perceives the Pentagon’s as a sign of moderation in the face of Trump’s adventurism and which tends to side with the military sector of government against the Presidential family clan.

This in no way implies that the Pentagon document has not been subject to criticism. The most common critique is that this is not a “strategy” but a summary of the problems that exemplify the global decline of U.S. leadership. This includes the US’s combat ability, given that one of the stated goals of the document is to ensure the means to fight a war that will dissuade enemies who may attempt to launch a second “opportunistic war.” This is a low bar considering that the goal has always been to have the ability to fight two wars at a time.

The Pentagon’s message to Congress and the state civil bureaucracy is that the “war against terrorism” has lost its cohesive capacity and that the military apparatus should be reoriented towards preparation for a war among nations, particularly among the “great powers.” This strategic long-term goal should not be interpreted as an indication that a war among world powers is imminent.

The Pentagon itself has explained that these are preparatory, not immediate tasks, given that over the past decade and a half the U.S. military has only engaged in the “war on terrorism” — by definition, an asymmetrical war with non-state or semi-state players (such as the Taliban or Saddam Hussein’s corroded regime).

The concrete goal of this defense strategy seems to be to acknowledge the new national players and rearrange the U.S.’s priorities on the basis of these threats. This is in line with the nationalist tone of Trump’s administration — “Good fences make good neighbors,” as a Pentagon official put it. But this would mean prioritizing U.S. allies and the global institutions (such as NATO) that have made U.S. hegemony possible since the second post-war period–running contrary to the President’s unilateral tendencies and displays of Twitter bravado.

Another important aspect is the manifest hostility towards Russia, both in the Pentagon and National document, which shows the effectiveness of “Russiagate” in shifting Trump’s policy towards Putin’s regime. However, some have pointed out that Russia’s promotion from “rogue state” to “revisionist power” signals the possibility of negotiations.

This is a shift towards a “post-911” phase, which replaces the Middle East and the Muslim world as the primary concern in order to respond to the U.S.’s new strategic challenges, particularly the emergence of China. Yet, this is not new, as Obama attempted to take this step during his second term. He proposed a “pivot to the Pacific,” but ended his term by bombing Iraq again (from which he had removed most of the U.S. troops) and intervening indirectly in Syria (against ISIS), Yemen, Libya and Somalia. And after 16 years, there is still a significant U.S. military presence in Afghanistan while the Taliban control a large part of the territory. Even today, the shift proposed in the Pentagon document is easier said than done.

The situation in Syria is the most concrete demonstration that the “war on terror” — on which the U.S. thought it could capitalize to restore its hegemony — has been contaminated by the rivalry between different powers. The fight against ISIS benefited Russia which, along with Iran and Hezbollah, intervened decisively in the last stage of the civil war to keep the Assad regime in place. Russia plans to take the credit for having defeated the barbaric Islamic State.

After the disastrous intervention in Libya, the U.S. foreign policy initiated by Obama, and essentially continued by Trump, was to intervene through the Kurdish militias of Rojava. This was an uncomfortable tactical alliance that has led to constant friction with Turkey, a U.S. ally and NATO member. These tensions reached a boiling point with the Turkish bombing of Kurdish militias in the province of Afrin in north-western Syria. In the labyrinth of the multi-sided civil war in Syria, Turkey is fighting its own war against the Kurdish movement, which places it on both sides of the fault line in the “anti-ISIS coalition.”

Now the Trump administration is facing a dilemma. Secretary of State Rex Tillerson announced the decision to intervene in post-war Syria with the objective of removing Assad and demanding the withdrawal of Iranian militias. But the U.S.’s allies in Syria, the Kurds, are being bombed by another American ally– Turkey. Turkey is still the U.S.’s last hope of preventing Russia and Iran from establishing the final terms of the “Syrian pax” during the conference to be held in late January in a Sochi Black Sea resort.

This explains the administration’s timid opposition to the Turkish bombings while recognizing Turkey’s right to defend its territory and sovereignty of the Kurdish forces fighting for independence.

Although the full implications of this shift in the military paradigm are yet to be seen, the most tangible and immediate consequences of the new defense strategy will be domestic: it will drive Congress to approve an increase in military spending (the White House has already proposed an increase of $54 million), modernize the U.S.’s arsenal of conventional and nuclear weapons and expand business operations between the Pentagon and military and technological companies in order to preserve the U.S.’s unquestioned military supremacy, which continues to be its main comparative advantage to other countries. While the U.S. spends approximately $588 billion a year on its military, China (globally the second highest spender on arms) and Russia spend $162 billion and $44.6 billion, respectively.

This enormous transfer of resources to the military apparatus aimed at strengthening the imperialist war machine — and with it the dominant position of the U.S. bourgeoisie — is coupled with huge tax cuts for corporations and the 1%, the Trump administration’s main achievement to date. The looming “conflict among world powers” and these militarist and Bonapartist trends are signs that, in times of conflict, the ruling classes will not hesitate turn to force as a solution. The workers and oppressed of the world must prepare to confront this scenario.