On Monday, workers at Berlin’s Charité hospital began a five-day strike. Workers of the Charité Facility Management (CFM) are responsible for cleaning, sterilization, patient transport, food preparation, and all the nonmedical work at Europe’s biggest university hospital. They are demanding equal pay for equal work. 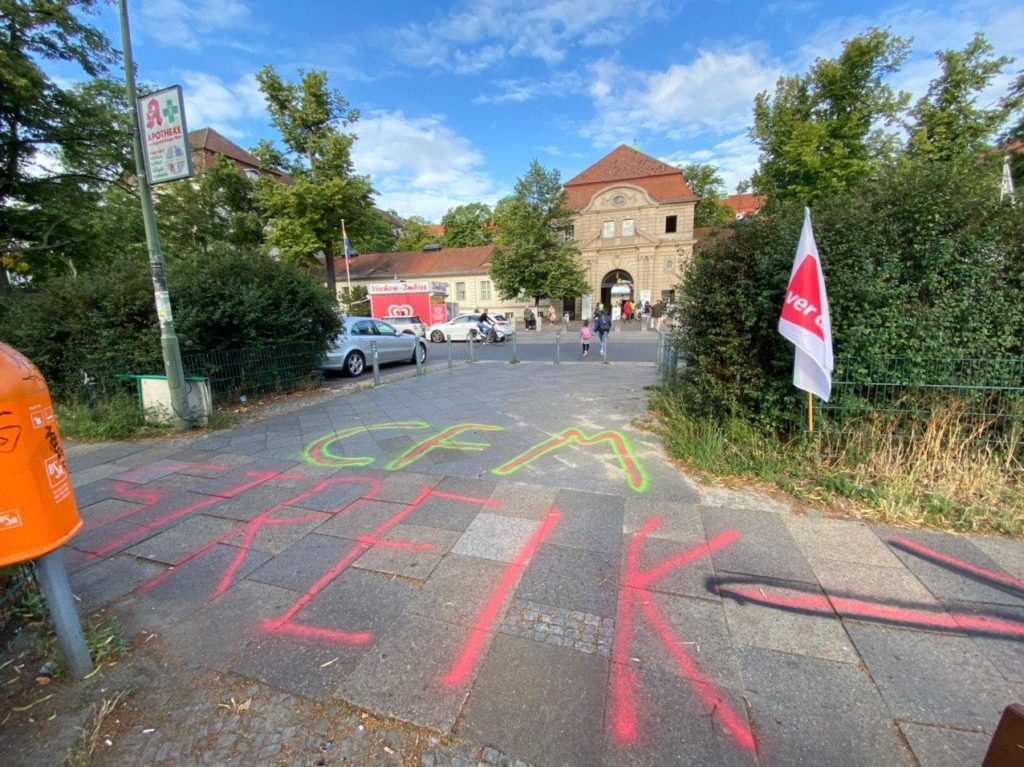 The Charité, founded in 1710, is the oldest hospital in Berlin. With over 15,000 employees, including over 4,000 doctors, it is also the largest university hospital in Europe. But not everyone who works at the Charité is counted as a hospital employee. Two thousand five hundred nonmedical workers are needed to keep the three campuses running: they are responsible for cleaning, sterilization, patient transport, food preparation, and everything else.

These nonmedical workers are part of the front line of struggle against the coronavirus pandemic. Without hospital janitors, for example, it would be impossible for doctors and nurses to treat patients safely. They have gotten much praise from politicians, but little actual compensation for risking their lives. So far, the German government has only paid hospital workers a one-time bonus of €500.

And nonmedical workers at the Charité are employed by a wholly-owned subsidiary of the hospital: the Charité Facility Management or CFM. On Monday, almost 400 CFM workers began a five-day strike. They want to be paid according to the same collective agreement that all other Charité workers have.

Doctors and nurses at the Charité are paid according to the Collective Agreement for the Public Sector (TVöD in German). The CFM was outsourced in 2006, as a Public Private Partnership between the Berlin government and multiple corporations, in order to cut the wages of nonmedical workers.

Work at the CFM is characterized by low wages — often at or just above minimum wage — and a lack of job security. The first strike at the CFM, lasting 13 weeks, took place in 2011. The bureaucratic leadership of the public sector union ver.di declared a victory in that strike — but they did not actually win a contract.

In the last nine years, numerous other strikes have taken place. Unfortunately, ver.di leaders have applied the brakes before these strikes could be effective. Crucially, they have steadfastly refused to have nonmedical and medical workers at the Charité strike together, just like they have refused to organize joint strikes of the outsourced workers at all Berlin hospitals. This is because these union leaders are closely linked to Berlin’s governing parties.

The last strike at the CFM took place in March, as the coronavirus pandemic was just reaching Germany. Here again, the ver.di leadership cancelled the strike without even consulting the strikers themselves. The leaders promised that the Berlin government would grant concessions through negotiations. But after months of virtual meetings, Berlin’s Health Senator has not offered a single concession. Since the CFM belongs to the Charité and the Charité belongs to the Berlin government, this is entirely the responsibility of Berlin’s Senate.

Why can’t the Charité simply offer union wages to everyone? The wage increases would cost several million euros per year — peanuts in comparison to the hospitals €2 billion annual budget. But the model of outsourcing and precarious labor is central to Germany’s economic model, both in the public and private sectors. Berlin’s public sector, for example, has over 100 of these low-wage subsidiary companies. This is particularly scandalous since Berlin’s government is composed of the social democratic SPD, the Green Party, and the Left Party — all three of which have promised to end this kind of outsourcing for years, but have refused to actually do anything.

This strike is not just about the CFM workers. It is a struggle for low-wage workers across Germany. The CFM workers have shown an astonishing determination over the years, and they deserve the support of workers internationally. If you send messages of support to Left Voice or our German sister site Klasse Gegen Klasse, we will make sure they reach the strikers.