A migrant woman worker shares her experience of the conditions that capitalism creates for women on both sides of the border—and why unity of the working class is imperative. 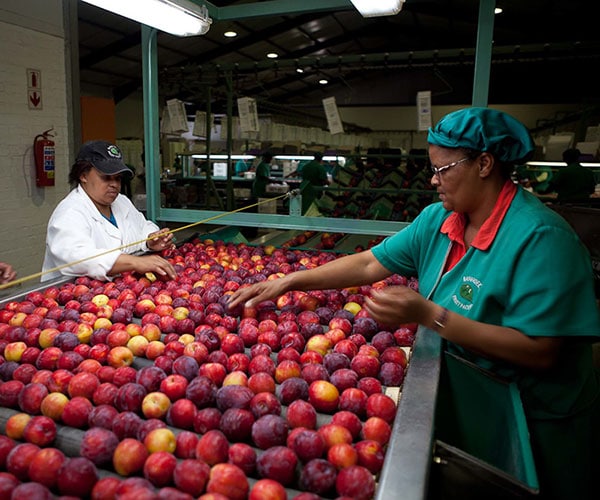 At the beginning of cantaloupe and watermelon season, hundreds of shipping containers from Honduras and Guatemala start arriving at the Port of Long Beach in Southern California. Once the imported fruit is unloaded, workers transfer it to nearby cold storage and fruit packaging warehouses. The day starts at 8:00 a.m.; dozens of women wait in line to punch their cards as they greet each other. Even though the women work 25 miles south of Los Angeles, they wear winter coats, as they will spend the day working in a warehouse kept at a temperature of 14°F (-10°C) .

It is Ana Lucía’s (Lucy)** first day of work. She is nervous, because she knows that as the new worker, others are watching her, but no one asks her anything—not even her name. She is not here to make friends, though, and is thankful for the indifference. She started working at this company because someone had recommended her. They only told her that the job involved selecting and packing fruit; the details of the working conditions were unknown to her when she took the job.

Lucy’s supervisor assigns her to one of five tables in the work area. Among the five other women at Lucy’s table is a Mexican woman with eight years of experience selecting cantaloupes. The woman begins to rapidly fire the selected melons to Lucy, who is supposed to pack them in boxes. As Lucy is inexperienced and cannot keep up with her coworker’s pace. The cantaloupes are piling up at Lucy’s station, disrupting the production rhythm. At 10:00 a.m. the bell rings to signal the first recess. Lucy’s hands and back are already hurting.

At the end of her first day, Lucy’s body ache is unbearable and she knows she has done her job poorly.

By the end of her third day at the packing warehouse—Saturday—Lucy is so demoralized that she breaks down in tears when her family comes to pick her up from work. She feels like she can’t keep doing this job, but the economic necessity outweighs her physical pain. She has bills, debt, and wants to provide her children with better living conditions. She has not been able to find a better job in Mexico.

The days passed and soon, it was March. By that point, Lucy had made friends with other workers at the warehouse. It seemed as though her refusal to give up had won their acceptance. Lunchtime became the hour of tears, laughter, and confessions among workers.

All of them were terrified of Donald Trump’s presidency—his migration policy, especially. They sat around the TV in the dining room at work, attentively watching the news of demonstrations of thousands of women, marching through the streets on International Women’s Day. The demonstrations of solidarity inspired Lucy. She told workers at the fruit warehouse that they should organize a labor strike, even if it was only for an hour. Her supervisor responded, “And who will pay for the viles?” [Viles is a word Latinos use in the U.S. to refer to living expenses, such as utilities, food, or rent]

Lucy gradually learned that like herself, all of her coworkers were undocumented immigrants. Just like the cantaloupes and watermelons, they had come to California from El Salvador, Nicaragua, Guatemala, Honduras and Mexico— except the fruit seemed to have more rights in the U.S. than the bodies that packed them for consumption. The women cried talking about the daily fear of not returning to pick up their children from the homes of neighbours, sisters, or friends. The fear of deportation, a daily reality.

Manuela, one of Lucy’s coworkers from Mexico, told her how the death of her mother and later her father weighed on her immensely. She had not been able to say goodbye; they were in Mexico and she, undocumented and in the US.

Another woman, Martita, from El Salvador, told Lucy about being forced to choose only one of her two children to bring to the US with her. She “chose” the youngest child, and the older one never forgave her for it—a deep well of pain that she carries with her. Catalina, like a good abuelita true to her customs and traditions, forbade her grandchildren from speaking English in her house. She taught them good manners: thank you, excuse me, please; greet and respect your elders. She dreamt of going back to her native Veracruz, but her reality was in the factory.

When Lucy asked another coworker, Carmelita, if her body would ever get used to the job, Carmelita cackled at the idea and told her, “No.” That is why the women who had worked in the factory day in and day out all carried vials of pain medication. Most of the women were suffering from one or more medical conditions—arthritis, varicose veins, and lung and renal disease—but they self-medicate, as they cannot afford to call in sick and do not have access to Medicare— or any health insurance for that matter.

That’s why the women are thankful when there is overtime. Although the extra hours may mean putting in 12-14 hours in one day, the pain is temporary, and the extra money allows the women to not only pay for medication but also to send some money to their struggling families. When the women come home from the warehouse, they cannot put their feet up and relax. Their “second shift”—the domestic work—demands that they ignore the pain in order to take care of their children, elders, and community.

During her time at the fruit warehouse, Lucy witnessed the abuse of power by both female and male supervisors. She experienced various forms of workplace harassment, including sexual harassment. She watched the deplorable waste of food, as tons of fruit were sent to the dump. She realized the gross discrepancy between the earnings of the exploited workers and the revenue their labor was generating for the company. She calculated that the profits from four or five pallets of the packaged fruit was enough to cover the weekly wages of 30 undocumented workers. The workers packaged at least 100 pallets a day, meaning that 95 paletas were the bosses’ earning .

The two biggest packing seasons last between four and five months: cantaloupes and watermelons are repackaged for commercial distribution from January to May, and oranges, tangerines, kiwi, apples and grapes (imported from New Zealand, Australia, Chile, among others) are repackaged from July to November.

Most of these positions are seasonal or temporary, which is why the workers bounce from company to company. The owners of the sorting and re-packaging plants know that that 90% of workers are undocumented, so they do not hire workers directly. The migrants are hired through an external employment agency, which allows the warehouses to claim ignorance of the workers’ immigration status while simultaneously exploiting it. The bosses at the plants prevent most of the women from accruing overtime pay by restricting them to 40 hours a week. The companies make up for restricting the weekly hours by cramming in as many women as possible into the work area. For weeks, there are no fixed shift schedules; work can start as early as 4:00 a.m. and end as late as 6:00 p.m., but only the workers who have been there the longest are able to actually make overtime pay.

There are sorting machines for apples, oranges, and tangerines, but the packing plants still rely heavily on female labor. When the facility Lucy worked at acquired a kiwi-sorting machine, her bosses brought in clients from every corner of the U.S. to demonstrate and justify their half-a-million dollar investment. Lucy, who calls the machine “La Infernal” (the infernal one), is not impressed by its automated efficiency. The machine may be able to sort the kiwis faster than humans, but it is the women who will be expected to keep up with it. They have nine seconds to pack each box, packing hundreds and hundreds of boxes a day . The exploitative labor conditions these immigrant women experience in the U.S. are not so different from the conditions they would face in their native countries. But, to these migrant workers, it is worth it to be in the US to be able to make money in dollars and escape the violence in their home countries.

The face of migration and exploitation is female

This is only a piece of Ana Lucía’s story as an immigrant in the U.S., somewhere in Southern California. It illustrates that immigration has a woman’s face; women buttress, legally and illegally, two different economies. There is the economy of the countries that expel them, filled with hunger and fear, from their homeland and family. There is also the economy in the belly of the imperialist beast, which feeds on the fruits of migrant women’s daily labor.

It is the strength of these women that moves everything. They survived the perilous journey through Mexico, enduring discrimination, xenophobia, racism, and violence perpetrated by both criminal gangs and government authorities. These immigrant, indigenous, peasant, and poor women are raped, murdered, and trapped in human trafficking networks.

Their bosses and governments have little reason to care how many of these women become casualties of the system; for in this economy, they are disposable.

This is not just the story of Lucy. Its the story of countless women: our family, our friends and ourselves. And yes, to this system our dreams, families, and lives are disposable. The imperialist leaders of countries and corporations exploit the reserve army of unemployed men, women and children disenfranchised by the policies these leaders put in place. The imperialist giant cannot survive without the cheap workforce of millions of immigrants. For Lucy, the call for an international organization of working class women is an urgent one.

Regardless of country, our lives matter more than their profits!

**Names have been changed to protect the undocumented workers.