Workers in three fruit warehouses in Washington state are on strike for hazard pay, PPE and other protections. 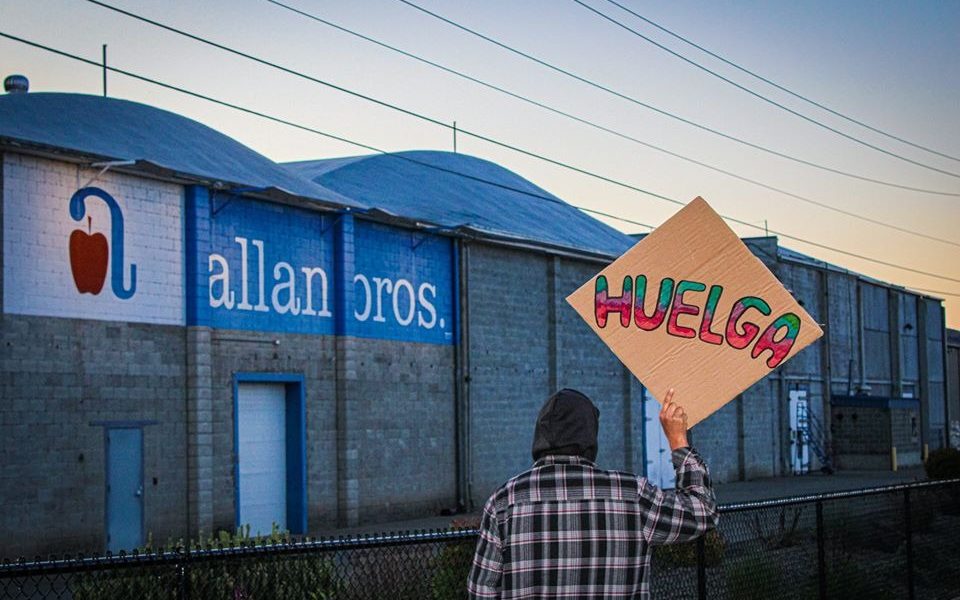 Three different fruit warehouses have gone on strike over the past week in Washington: Allan Brothers Fruit, Matson Fruit and Jack Frost Fruit. Deemed essential, these workers are forced to go to work without sufficient PPE or hazard pay. These workers live in fear of getting the virus and of getting their families sick. Allan Brothers Fruit has had walkouts for the past 6 days, inspiring workers in the other two warehouses to follow their lead.  The majority of these workers are not unionized, and many are undocumented and uninsured. Familias Unidas por la Justicia, an independent farmworkers union in the area has helped organize these actions.

On Friday, workers at the Allan Brothers Fruit warehouse staged a walkout. 12 co-workers had tested positive for COVID-19, and the company hasn’t provided safety equipment or even notified the workers that others had contracted COVID. According to Jennifer Garton, a worker there, it took a couple of weeks for the company to say anything.

In fact, one worker talked about asking a supervisor to tell co-workers that she might have COVID after she had a fever, shortness of breath, and difficulty breathing. She said, “I wanted to let them know because if it was the virus, I wanted the people I work with to know about it so they could take precautions at home. A lot of them have elderly people at home, others have children under the age of 2, newborns even.” The supervisor did not pass the information on to workers: “No one even knew that I was sick,” the worker said. Since she doesn’t have health insurance, she had to pay 100 dollars out of pocket for the COVID test: If she tests positive, the company will cover the cost; if she tests negative, they won’t.

The lack of safe working conditions is also jarring: There isn’t consistent access to hand washing or hand sanitizing. “Where I work, they haven’t been cleaning at all like they said they were going to,” Garton said. “Now we’re completely out of hand sanitizer and there’s no sinks at the shipping dock.”

Workers are too packed in the warehouse to be able to respect social distancing, and not everyone is even being provided a mask! “The way we work, we can’t just be six feet apart from each other,” a line worker who wished to remain anonymous said. “They try … but it’s impossible in our line of work.”

Instead of staying home, more than 50 workers stood in front of the plant at an appropriate social distance. They have continued their strike for six days now, demanding $2 hazard pay and PPE.

Yesterday, inspired by the actions of workers at Allan Brothers Food Company, workers at two other warehouses, Matson Fruit and Jack Frost Fruit, also walked off the job. Workers there too stood in front of the warehouses for rallies at a safe social distance. They spoke out for tests, PPE, and hazard pay.

Fruit packing and fruit warehouse workers are essential workers who keep food supply chains running: They ensure that there is fruit at the supermarket for everyone to eat. However, these “hidden” essential workers, precarious, often undocumented and Latinx, are not getting any of the protection or compensation necessary to carry out their jobs, while their bosses continue to profit from their labor. All over the country, from Amazon warehouses to meatpackers, workers are experiencing the same conditions. In order to fight, these sectors should unite to not only fight the bosses but take into their own hands the production of these essential goods in order to serve the community, not the bosses.