Fuck Columbus and the Boat(s) He Sailed In On 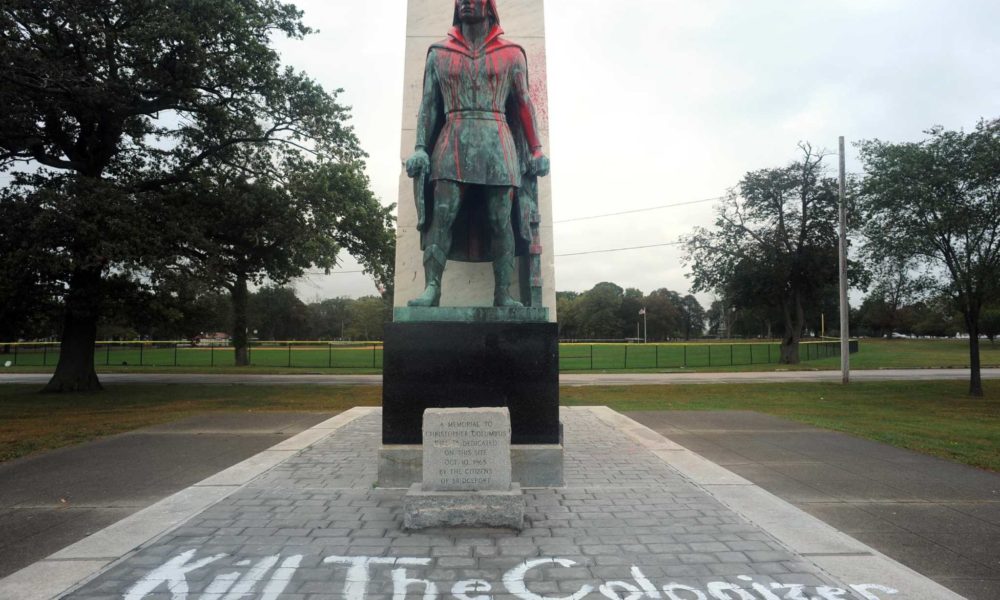 Columbus, Colonization, and the Genocide that Made America

While some cities and states have converted what was once Columbus Day to Indigenous People’s Day, the day remains a federal holiday that is still celebrated in several states under the Columbus Day name. This is abhorrent and should be stopped. But a holiday named after him is far from the only way the United States celebrates Columbus specifically or colonizers in general. Upwards of 13 U.S. cities are named after Columbus, and one of the most famous areas of New York City — Columbus Circle — boasts a 76-foot tall statue of him, which somehow survived the statue topplings this summer.

That we celebrate Columbus through holidays, naming cities after him and erecting statues, is not coincidental. Rather, it shows the way that the genocide upon which the founding of the United States rests has been swept under the rug. To quote Howard Zinn, “To emphasize the heroism of Columbus and his successors as navigators and discoverers, and to deemphasize their genocide, is not a technical necessity but an ideological choice. It serves—unwittingly—to justify what was done.” For the capitalist state, built on the genocide of Indigenous people and continued dispossession of Indigenous people the world over, this isn’t unwitting.

When discussing Columbus, we must understand not only that the branding of him as an American hero is an act of propaganda, but also see the cynical hypocrisy of capitalists who condemn his history in a vacuum. It has become easy in the modern moment for our class enemies to condemn Columbus as the racist murderer he was while at the same time speak about him as if he were some sort of historical aberration , unique in his evil. In fact, he was but one part of a larger whole — a whole that persists today.

Let us not forget that the United States still holds colonies and still uses its military and economic might to subjugate weaker nations in the global south. U.S. corporations still take Indigenous land and resources around the world. The United States and Canada continue to take the scant Indigenous lands that remain on the North American continent; the Dakota Access pipeline, built on the land of the Standing Rock Sioux, is a recent example. And further, the United States still devotedly adheres to its Constitution written by and for slave owners.

People in this country increasingly recognize fact that the United States was built upon two different genocides — the slaughter of Indigenous peoples and the transatlantic slave trade. But we cannot simply put Columbus, Washington, Jefferson, Jackson, Lee, and the rest in the garbage bin of history as if we have moved on from that history. This country has not. The capitalist system continues to oppress, disenfranchise, and kill Black, Brown, and Indigenous people. The era of colonialism opened by Columbus birthed the brutal imperialist era in which we live today. We cannot deal with the sordid history of the United States simply by taking down statues and renaming holidays — although we should, of course, do both of those things immediately. Rather, we must deal with the sordid history and everyday reality of U.S. imperialism by bringing it down. The capitalist state that continues its colonial oppression must be overthrown.

There has been Indigenous resistance from the moment of Columbus’s first attempts to colonize the Americas. Brave people across all the continents have organized and fought back against the onslaught of colonialism and racism. From the open armed conflict of the so-called “Indian Wars” to the mass resistance against the Dakota Access Pipeline at Standing Rock, Indigenous activists have been heroic in their opposition to oppression.

Earlier this year, two Sioux tribes in South Dakota defied the governor’s order and established checkpoints to protect themselves from the spread of Covid-19. They did this in part because Indigenous communities have been especially hard hit by the virus, and the U.S. government has consistently failed to honor its commitments to tribal nations to fund healthcare and other social programs. Indeed, the U.S. government has even used the Covid-19 pandemic as a cover to steal more Indigenous land.

There are shining examples of Indigenous resistance beyond the United States, too. Most notably, Indigenous workers led the resistance to the right-wing coup in Bolivia. As just one example of the bravery of these Indigenous activists, thousands of them marched across the country, entering the capital city and demanding the end of the coup — facing incredibly harsh repression along the way.

In Chile, the Mapuche — the people indigenous to Chile — have also been in the vanguard of the fight against the Chilean regime. One young Mapuche leader, Camilo Catrillanca, was murdered by the police during a protest. From even before the explosion of class struggle in Chile last year to the present moment, the Mapuche have been on the front lines of the struggle against neoliberalism and the terrible violence of the Chilean regime.

For hundreds of years, since Columbus first brought colonialism to the Americas, Indigenous people have been disenfranchised, enslaved, and murdered. To this day, they are still denied sovereignty over their land and face severe political and social oppression. That several states still celebrate Columbus Day is reprehensible.

Indigenous oppression as a fundamental part of how U.S. capitalism works. Any revolutionary movement we build must raise the demand for self-determination of Indigenous people in the United States and throughout the world. .

In an unending continuum from Columbus to Trump, U.S. and colonial regimes have horribly oppressed Indigenous communities. We must fight against these attacks with the full power of the working class and stand in unwavering solidarity with Indigenous people.

Down with Columbus Day! Solidarity with Indigenous Resistance!