Gaëtan Gracia: We’re Going to Have to Fight for Our Own World after the Pandemic

In a speech given at the international rally of the Trotskyist Fraction this May Day, Gaëtan Gracia, a militant worker and member of the Revolutionary Communist Current (CCR), denounces the French state’s efforts to repress workers’ actions to combat the public health and economic crises and the role French imperialism has played in withholding crucial medical supplies from the African countries they exploit and oppress. 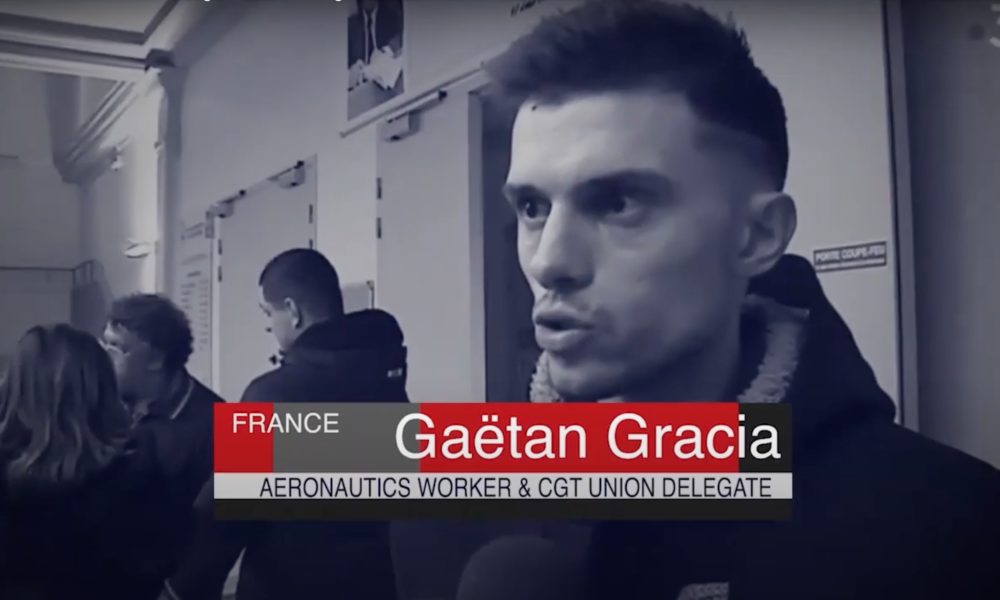 Gaëtan Gracia is a worker at Airbus in Toulouse who played a central role in organizing a union there and is now a delegate to the CGT. He is a member of the Revolutionary Communist Current (CCR) within the New Anti Capitalist Party (NPA) in France and an editor for Left Voice’s sister site, Permanent Revolution.

Greetings, comrades. Let me tell you about the situation in France. The coronavirus didn’t arrive like some explosion in a clear sky. Just a few days before the confinement measures began, we were out demonstrating, coming together against the pension reform.

The class struggle has been on the rise in France since 2016. That year, it was the fight against the reform of the Labor Code, being imposed by a so-called left-wing government – the Socialist Party. That reform was the final act of a kind of “bipartism.”

French governments for years had been alternating between center-right and center-left. It created a crisis – one Macron promised to solve when he ran for president. He presented himself as a credible alternative, someone who could reestablish the strong domination of the bourgeoisie. But, to say the least, what happened is the opposite.

In 2018, the massive revolt of the Yellow Vests erupted. It occupied the traffic circles and major boulevards of Paris and our other big cities. For a few weeks, at least, it shifted fear in France to the bosses’ side. The Yellow Vests revolt upset the usual routines of the union bureaucrats. It seeped in to the labor movement, as we saw later in the huge fight against the pension reform.

All of this marked a return to class struggle. And our comrades have been at the heart of this process.

In the fight for pensions, our comrades put tremendous energy into building a coordinating committee among the bus and commuter rail workers. It is the movement’s deepest expression of self-organization, independent of the union bureaucracy. One of our comrades, Anasse Kazib, is the best-known figure and main spokesperson of this coordinating committee. That’s the context for the health crisis – it came in the midst of a return of class struggle.

We’re supposed to have the best healthcare system in the world. But we’ve failed at providing gowns for the caregivers. They’ve had to use trash bags instead. And they’ve been forced to rely on contributions from everyday people just to do their jobs – which is to save lives.

Faced with its own calamitous management of this health crisis, what did the French government decide to do? Unleash the police. And we’ve seen a sort of two-tier containment. Containment in the working-class neighborhoods is not the same as elsewhere. First, there’s a double standard. People who live in the working-class neighborhoods are suffering through the worst spread of the virus. And it’s not because they don’t follow the confinement rules, it’s because they are mostly front line workers, forced to go to their jobs and work in the current conditions.

But as if that wasn’t enough, their neighborhoods are crawling with police, sent to manage them through brutal repression. In the working-class neighborhoods, we are more likely to be beaten by police than be tested for Covid-19. This police repression has been the subject of more and more media attention. But it’s not just a few bad apples on the police force, as the press keeps saying over and over. No, these are methods with a long history, used to control the population.

France tested them out when it tried to repress the Algerian war for independence, and then used them in its corner of Africa. And now it’s using these methods to control the suburbs where workers and immigrants live. We see this as the employers’ association and the government using these policies as preparation for the “post-coronavirus world” — after the pandemic.

That’s why we must fight for our own solutions, for our own world after the pandemic — Not theirs, which they try to impose with clubs and widespread surveillance. Not theirs, where some people will have no jobs and others will be forced to work twice as hard.

We’re going to have to fight for our own world after the pandemic.

Back in March, in the aeronautics industry, where I work, we fought to close most of our plants. We didn’t think there was anything essential about delivering aircraft to airlines that have already grounded their planes. Airbus and the government tried, right away, to reopen the plants – even if it meant using hundreds of thousands of masks for workers instead of giving them to healthcare workers. There’s no logic in that.

But our alternative makes sense: workers’ control. We, the workers, should control the health measures. We can’t count on the managers. We, the workers, should control the companies’ ledgers – especially companies that claim they are in financial distress as a way to justify layoffs. We, the workers, should decide what gets produced and what doesn’t get produced. We should decide what’s needed, what’s useful in this pandemic. This is about converting production – and it’s a critically important issue. We declared that we’d be proud to produce ventilators, masks, sanitary hand gel, anything that would be useful in fighting the pandemic. The bosses have always turned a deaf ear to that.

Now some of them say they’re going to convert some of their production to making masks. But let’s be clear: They’re doing that according to the logic of their capitalist system.

In France, we’re hearing about masks being sold at newsstands for 5 euros! The capitalists saw a market where they could make a profit. It’s criminal! That’s their conversion of production, not ours. It’s criminal. It’s like a ship sinking, and the capitalists are auctioning lifejackets! That’s not our idea of converting production. We want to manufacture ventilators, masks, gel, etc. for whoever needs them, not to sell to the highest bidder.

In Africa, French imperialism has continued to plunder resources. Because of that, there are only a few dozen ventilators for millions of Africans. We would be happy to manufacture ventilators en masse so all workers have them – French and African – no borders, no discrimination. Comrades, the only line we recognize is the one between the classes. We say this loud and clear, especially as tensions between countries are growing.

It bears repeating: We oppose all patriotism, whether it’s the left-wing patriotism of a social-democratic populist like Mélenchon or the clearly reactionary patriotism of Marine Le Pen of the National Front. We stand against imperialism, and for internationalism among all workers.

This is the basis for our fight in France for a mass revolutionary party that brings together militants and currents from different traditions and backgrounds. It’s the perspective we fight for within the New Anti-Capitalist Party (NPA), beginning with a regroupment of the NPA and Lutte Ouvrière – discussing and debating the lessons from the class struggle in recent years.

But we are fighting for a party that goes even further. A party that brings together the trade unionists and other workers who have been on the rise since 2016, that brings in some of the Yellow Vests, militants from the working-class neighborhoods, young people, women — Everyone today who is moving toward anti-capitalist politics.

We believe it’s possible to build a party with a clear revolutionary program and strategy. A party that fights for communism. For a world after the pandemic will be organized to serve our lives, not their profits.