On Wednesday, Jan 8, 250 million people are estimated to go on strike in a Nationwide General Strike in India. This comes on the heels of a month-long protests against the current political regime that have drawn hundreds of thousands to the streets. 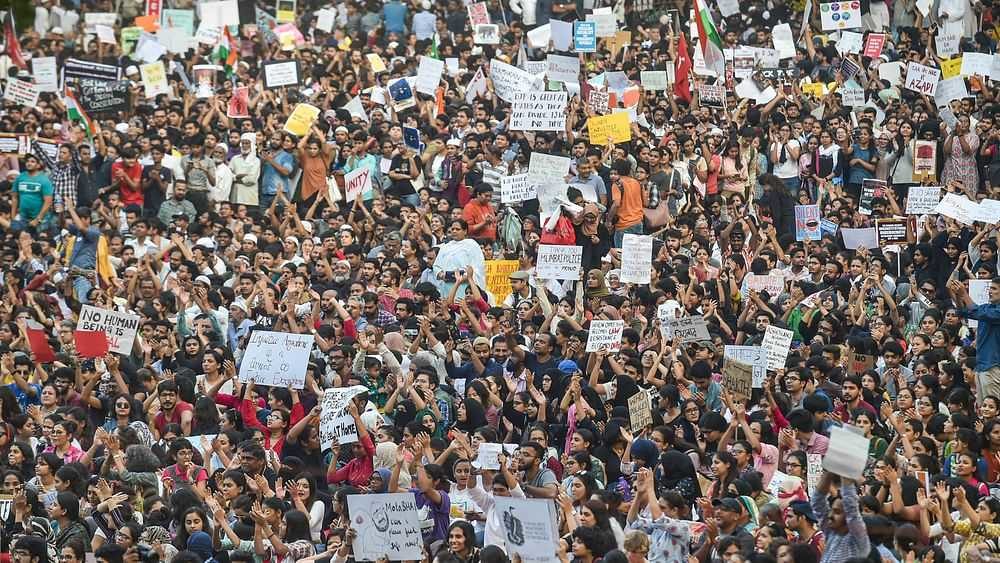 Almost a month after India’s masses took to the streets to protest the discriminatory Citizenship (Amendment) Act, the popular uprising in India continues to spread across towns and cities and to force a confrontation with India’s current political order.

Earlier in December, the Narendra Modi-led government passed the Citizenship (Amendment) Act, or the CAA, which provides a path to citizenship for immigrants from Afghanistan, Pakistan, and Bangladesh who are Hindu, Jain, Christian, Sikh, Buddhist, or Parsi. The Act is not only openly discriminatory against Muslims, the largest immigrant group in the country, but also sets a dangerous precedent of religion-based citizenship in the region. Coupled with the National Register of Citizens (NRC) exercise in the state of Assam, the CAA can potentially disenfranchise millions of Muslims who’ve known no home but India. In the final publication of the NRC list, 1.9 million people were excluded for not being able to adequately prove their citizenship. They now face the possibility of indefinite imprisonment in detention centers.

The NRC placed the burden of proof on individuals, the majority of whom were working class or poor, to prove that they belonged in the country. To the surprise of the Hindu-nationalist Bharatiya Janata Party-led government, the majority of those excluded from the NRC list were found to be Bengali Hindus. By easing the conditions required for citizenship for the six communities outlined by the Act, the CAA now gives them a second chance at citizenship–a path to full rights and freedoms that will be denied to other marginalized and vulnerable groups, particularly Muslims.

In addition to the CAA and NRC, the Modi-led government previously abrogated Article 370, a special status granted to the state of Kashmir that protected its autonomy. Modi put Kashmir under a  complete communications blackout and sent hundreds of troops to repress potential unrest. The only Muslim-majority state in India and one of the world’s most densely militarized regions, Kashmir continues to be on military lockdown now for over five months. In its second term, the BJP has fully committed itself to actualizing its vision of creating the Hindu rashtra, or an ethno-nationalist Hindu state.

While the current political regime implemented their program with little resistance, the passage of the Citizenship (Amendment) Act marked a crucial tipping point. Protests broke out across the country almost instantaneously, rallying hundreds of thousands to the streets in all major towns and cities. While cities like Mumbai and Kolkata have been drawing large numbers to the protests since the early days, recent weeks have seen mobilizations of hundreds of thousands of protesters in cities like Hyderabad and Kochi. Similarly, although early protests saw severe repression by the police in Bangalore, protests there in recent days have drawn out over 100,000 protesters to the streets. 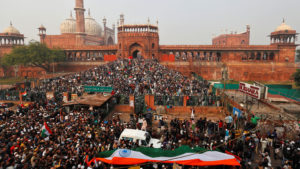 Demonstrators attend a protest against a new citizenship law, after Friday prayers at Jama Masjid in the old quarters of Delhi, India, December 20, 2019. REUTERS/Danish Siddiqui

In Delhi, members of the Muslim community, responding to calls by Dalit activists, defied the no-protest orders mandated by the police and converted a Friday prayer service at the country’s most historic mosque into a day of protest–one that could not be breached by the police. In Shaheen Bagh, a largely working class neighborhood in South Delhi, protesters have occupied a highway and continue to keep vigil around the clock in the midst of one of the coldest winters in the city. Thousands of protesters, led largely by Muslim women, have held steadfast in their occupation and refused to leave, even as members of their leadership have attempted to call it off and asked them to disperse. In fact, the numbers in Shaheen Bagh have multiplied since the start.

Protests against the CAA have also been met with violent repression, particularly in states where the government or police are under the control of the BJP. While the BJP political machine has been using a targeted disinformation and PR campaign to garner support for the CAA, their supporters and the police have seeked to manufacture complicity with brute force. In the BJP-run state of Uttar Pradesh alone, 20 people have died, 1,100 people are under arrest, and 5,558 have been detain preventatively. The police also forcefully seized property of those they suspected to be a part of the protests.

Some of the worst instances of violence have been reserved for those of the Muslim community. The violent crackdown that began with the targeting of historic Islamic universities like Jamia Milia Islamia and Aligargh Muslim University, where students were tear-gassed in libraries and forcibly expelled from their hostels, continues in cities like Lucknow and Muzzfarnagar, where police have indiscrimately attacked and arrested civilians, including Maulana Asad Raza Hussaini and his students who were violently beaten in police custody.

More recently, 50 armed assailants sympathetic to the right-wing stormed Delhi’s prestigious Jawaharlal Nehru University, vandalized property, and beat up students and teachers, landing over 25 of them in the hospital with severe injuries–all under the protection of the Delhi police. This latest attack on the students at JNU–who often represent the vanguard of the student movement–has only given more fire to the protests; the youth across the country have only become more resolute, not only in their denunciation of the violence, but also in their resistance to the political regime.

This polarization in India is unfolding against the backdrop of a major economic slowdown, increasing unemployment, and precarity for India’s large working class and poor population. This is largely the result of the neoliberal policies of the current government. Modi’s bid to push for privatization, erasure of labor laws and protections, and provision of tax cuts to the rich has only worsened the lives of the vast majority. The government announced in September that it would cut corporate taxes from 35% to 25%. Meanwhile, unemployment is at an all-time high of 8.5% and the country’s growth has reached its lowest point in five years. In November 2019, moreover, Finance Minister Nirmala Sitharaman announced the sale of major publicly owned companies–including Bharat Petroleum and Air India.

In September 2019, ten central trade unions, along with other independent federations and associations, announced a nationwide general strike for January 8, 2020 in response to the government’s attacks on workers. While early demands by the unions included an increase in the minimum wage, the roll-back of anti-labor policies, an increase in pensions, and an end to the privatization of public sector undertakings, the scope of the strike has widened in the light of current protests against the CAA and NRC.

In recent weeks, 175 unions of farmers and agricultural workers extended their support to the strike and added their charter of demands to the slate. Over 60 student organizations, unions, and elected office bearers from universities have expressed solidarity with strike. In a statement released on Monday, January 6, the trade union leadership estimated a participation of 250 million people in Wednesday’s strike–the largest of its kind in history.

A Chance to Win

If history is any witness, reforms aren’t won by appealing to the goodwill of bourgeois politicians, particularly those who’ve peddled communal division and violence. They are won by the masses taking to the streets, led by the working class and youth who refuse to accept anything less than what they deserve. In tomorrow’s general strike, there is now a real opportunity to not just win the economic reforms that have been put forth by the trade unions, but also the political reforms that have been fought for in the streets for over a month.

Political opportunists from other parties have attempted to throw their lot in with the anti-CAA protests. Over 11 state governments have committed to not implementing the CAA. The Left parties announced seven days of nationwide action in the week leading up to the general strike. None of these parties that now so boldly stand against the BJP regime and in opposition to Modi, however, ever passed legislation to ensure the complete democratic rights and citizenship for all immigrants in their many years in leadership.

If the potential scale of this general strike is any indicator, however, the masses in India have a real opportunity to win against the political order and secure their rights and freedoms. Those in the streets protesting and preparing for tomorrow’s strike should take inspiration from the hundreds of thousands of protesters in places like France and Chile who, instead of giving in to offers of reforms by their governments, continue to fight in the streets for more because they know they can win more. In the prospect of this general strike in India, there is a strength in alliance between the working class and the youth–the most advanced sectors of the movement. The power of the strike can be used not only to win workers’ immediate demands for reform, but, if harnessed into sustained and continuous action, can have the power to challenge the current government and win more expansive demands for broader sectors of society.