Earlier in the week, the Spanish Supreme Court sentenced leaders of the Catalan independence movement to unusually harsh prison sentences of up to 13 years. Hundreds of thousands of people have mobilized on the streets, shutting down freeways and the Barcelona airport and clashing with the police. They are now preparing for massive demonstrations and general strike that will paralyze Catalunya this Friday. 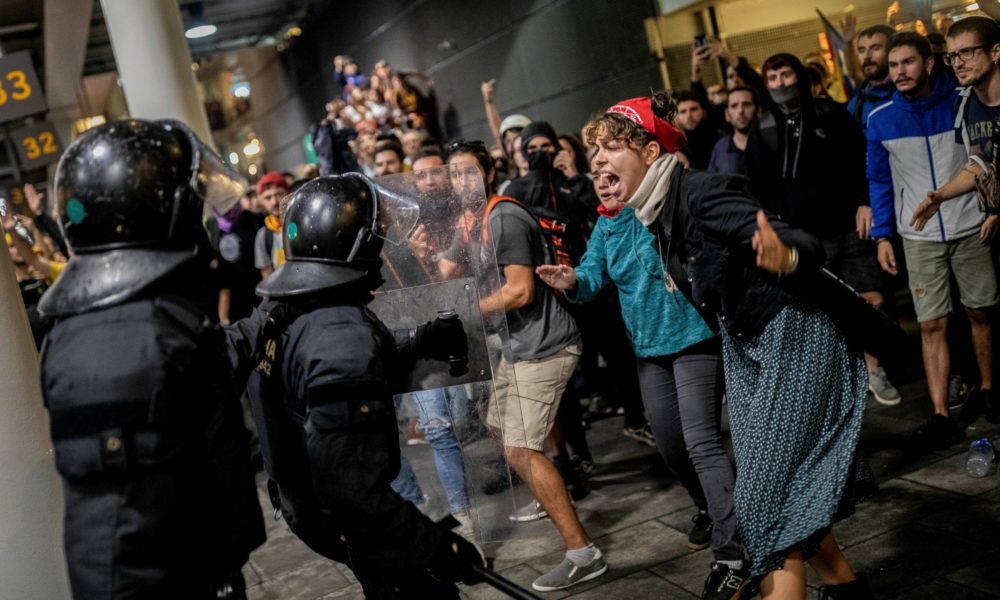 Two years after the 2017 referendum that was declared illegal by the Spanish state, the struggle for the independence of Catalunya continues to grow. A new wave of protests began after the Supreme Court on Monday sentenced leaders of the independence movement to long prison sentences for sedition and misuse of funds.

The toughest of these sentences went to Oriol Junqueras, the former deputy leader of Catalunya, who has been condemned to 13 years in prison. Others received sentences that ranged between nine and twelve years. The Spanish judge also reissued a European arrest warrant for Carles Puigdemont, the former leader of Catalunya, who has been living in exile in Belgium to avoid prosecution in Spain.

Last weekend, Spanish authorities had deployed riot police across Catalunya in anticipation of the court’s ruling. Immediately after the verdict was announced, demonstrators took to the streets and blocked major highways and train lines. Thousands more marched to and occupied Barcelona’s El Prat airport, forcing over 100 flights to be canceled.

You might like: Support the Rebellion of the Catalan People and Their Right to Self-Determination (Statement from October 11, 2017)

While the protests at the airport started as a peaceful occupation, they quickly became combative after police in riot gear charged at those blocking the entrance and fired foam bullets. This altercation left over 100 people injured. Cashes between protestors and police escalated soon after and continued through Tuesday and Wednesday, as demonstrations turned into running battles through Barcelona. 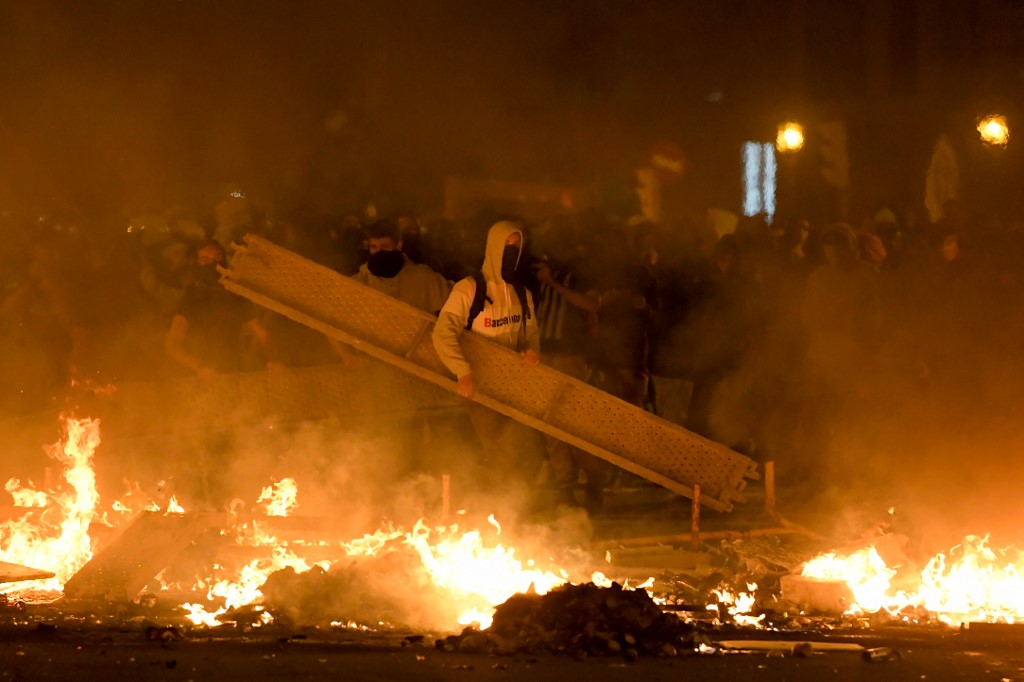 Over the last three days, it is estimated that hundreds of thousands of people have taken to the streets in Barcelona, Girona, and other Catalan cities. Protestors erected barricades and set cars on fire to lay claim to the streets. In return, riot police fired tear gas and ran over protestors with their armored vans in order to disperse the crowds. Activists have suffered serious injuries, including one protestor who is reported to have lost an eye. For every crowd they dispersed, however, more popped up across the region. The youth, who have thronged the streets, haven’t been afraid to occupy space. Over 25,000 students gathered outside city hall on Thursday, egging and throwing toilet paper at the police officers trying to contain them.

Furthermore, in what is anticipated to be the biggest mobilization yet, thousands of people are marching to Barcelona to join students and trade unions in a mass demonstration and general strike on Friday.

On Wednesday evening, in the face of calls from the right-wing opposition to repress the movement, Spain’s prime minister, the social democrat Pedro Sánchez, warned that his government will not be provoked to overreacting. Although others in government have called for the activation of Article 155, which allows the Spanish state to suspend the regional government and assume direct rule, Sánchez, in a bid to appear as an electable candidate in November’s general election, wants to broker a solution with “firmness, calmness, and unity.”

But for Sánchez, who is opposed to Catalan self-determination, there are limits to this solution.  He has defended the court’s ruling and called upon the need for them to serve their prison sentences. He also praised the Spanish police and Mossos d’Esquadra, Catalunya’s autonomous police, for their actions in controlling the demonstrations, and will deploy additional security forces in the region over the weekend to curb the rising conflict.

For Sánchez, the question of independence has to be resolved by legal means. The Spanish constitution of 1978, however, explicitly prohibits national self-determination, which makes the holding of a democratic referendum an act of “sedition”. For moments like this that pierce through the facade of false peace, the only way to eke out an acceptable solution is through violent repression.

Friday’s general strike is expected to be one of the biggest mobilizations for Catalan independence in recent times. 21,000 people from the towns of Vic, Girona, Tàrrega, Tarragona. and Berga set off on Wednesday to march over 60 miles to Barcelona to participate in the strike. Students in Barcelona, who’ve been on strike since Wednesday, will also be joined by trade unions who called for a general strike. The CSC-Intersindical and Intersindical Alternativa de Catalunya, two alternative trade union federations, postponed their October 11 work stoppage for better wages and working conditions to coincide with the pro-independence demonstrations on Friday. Although labor unions are barred from striking for political reasons in Spain, in a striking show of solidarity, the unions have expressed that democratic rights for oppressed nations are labor rights. 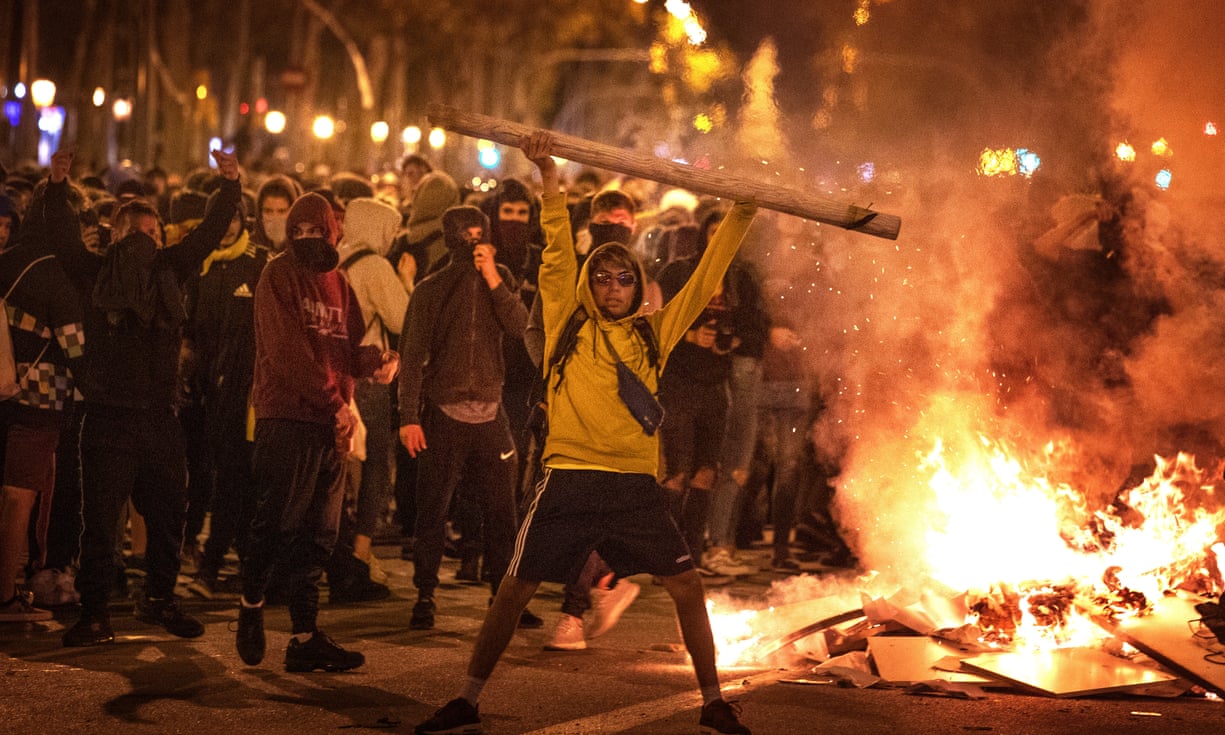 As Catalans continue to face off against the Spanish state, it is imperative to speak out for their right to self-determination. As our comrades in the Revolutionary Workers Current (CRT) put it, the state paints protestors as “violent” in order to justify their violent repression in Catalunya, which has already left over 200 people injured. The general strike of October 18 provides the chance to strategically advance this struggle.

In order to sustain and strengthen this fight, and to decide democratically about the best way to attain self-determination, it is essential that the independence movement (and especially its anticapitalist wing) works to establish assemblies in schools and universities, workplaces, and neighborhoods. Developing these methods of self-organization and putting the youth and the working class at the center of this democratic fight are fundamental elements that are being brought up in the streets. Real self-determination will only be possible if the independence movement adapts a program that responds to the pressing demands of working people across Catalunya and the Spanish state, including an end to precarious employment and austerity measures.