San Jose—The Costa Rican working class has again burst onto the stage of history. Public-sector workers have launched a countrywide general strike against the government’s austerity plan to deal with the country’s fiscal crisis. 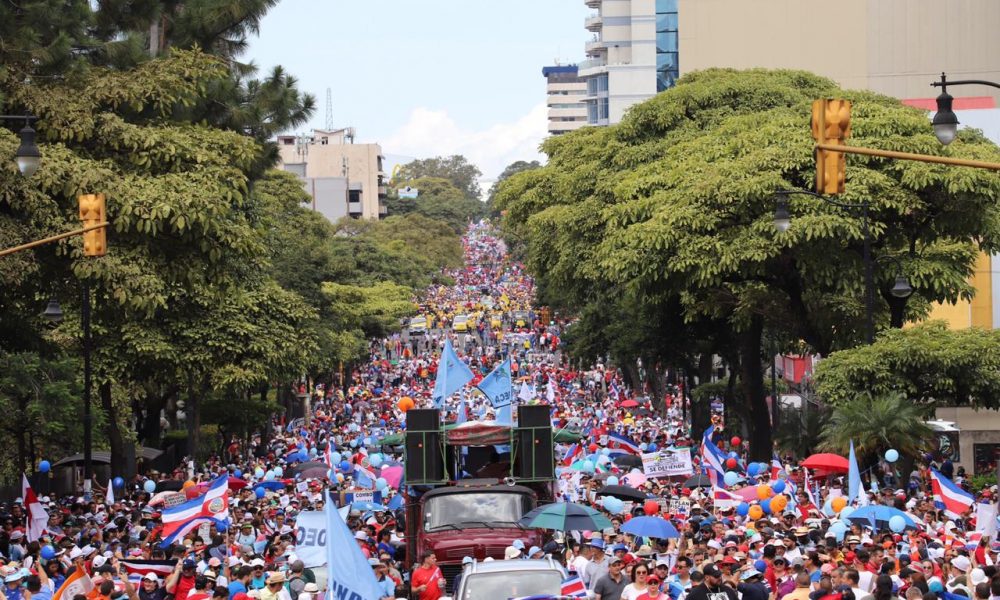 The strike has led to Costa Rica’s largest mobilizations in years, and it has left the government isolated and on the defensive, even from its own supporters in the National Assembly.

The strike, called by a coalition that includes teachers and the workers at the Instituto Costarricense de Electricidad (I.C.E.), is set to last indefinitely. Hundreds of thousands of workers have taken to the streets in all the country’s major cities, and their protests have been repressed by the Fuerza Publica, the national police force.

After the International Monetary Fund and the Inter American Development expressed concern about Costa Rica’s growing public debt, the newly installed government of Carlos Alvarado announced last August that it would exercise “fiscal discipline” by imposing new taxes on the working class and by cutting public-sector workers’ pensions and benefits.
The workers of the national trade unions have rejected this plan and drawn up an alternative plan that would establish a progressive income tax system, cut the unfair value-added tax, close tax loopholes for the wealthy and impose a modest tax regime for the industries located in the Zona Francas (maquiladoras).

Struggles against the imposition of an IMF-style adjustment program are not new for Central American countries. What is new for Costa Rica is that the struggle is being waged on a class basis. The general slogan of the struggle is “The workers will not pay for their crisis, let the rich and big capital pay.” This slogan became predominant in April during a one-day warning strike, in which 150,000 workers took part, and again at the annual May Day demonstration.

The combination of the workers’ slogan and their alternative plan has been instrumental in breaking through the facade of “solidarismo,” the key ideology of the Costa Rican oligarchy and imperialism, which in better times was used to hide the class divide by promoting the idea that “we are all in the same boat.”

The strike has immense public support. Helping to build that support has been the massive size of the mobilizations, the government’s bumbling response to the protests and police repression.

On Monday, the first day of the strike, an estimated 150,000 workers marched on the National Assembly, demanding that the government receive the alternative fiscal plan. But the marchers were instead met with a show of force. Hundreds of police surrounded the Assembly building and picked fights with the strikers.

Following hard on the heels of daily images of repression unleashed in next-door Nicaragua, these scenes were met with anger by the population. On Tuesday night, a squad of mounted Fuerza Publicas violated the autonomy of the University of Costa Rica, beating and injuring several students. The rector of the university responded by denouncing the attack and demanding to meet with President Alvarado.

Alvarado at first refused, then backed down after the uproar unleashed by the police actions. He agreed to meet the rector to discuss an investigation into the matter, after UCR students and employees called for an immediate march on the president’s residence.

In the meantime, however, Alvarado has refused to meet the leaders of the strike, who want to present the workers’ plan. He demands that any meeting with them must take place after they call off the strike. In addition, the deputies of the National Assembly have drawn up a modification of the government’s plan, tinkering with some of its more onerous provisions. Alvarado has refused to accept this plan as well, one in which members of his own party, the Citizens Action Party (PAC), participated.

The Workers Are Ready to Fight

In this initial period of mobilization, the Costa Rican working class has shown its ability and willingness to fight. The participation of tens of thousands of young workers, joined by thousands of university students, demonstrates a shift in class consciousness among a new generation of Costa Ricans who will no longer buy into a shattered vision of a U.S.-style American dream. This rejection of the former “go along to get along” style of social relationships has great implications for the future.

In addition, the fact that the governmental budget has become a flash point for a massive class struggle, and the political struggle of a mobilized working class, shows the shallow roots that newly established political formations like the PAC are resting on. Moreover, it shows the weakness of an oligarchy that has neither an independent plan of national development nor a coherent political project to handle the rising tide of class and popular struggles sweeping across the region.

Despite this real weakness of bourgeois leadership, and despite the radical rhetoric of some sections of the trade union leadership, the aims of this movement at present are to reach a negotiated compromise that in all likelihood will merely postpone the worst consequences of the austerity plan.
But the class struggle as political struggle develops a dynamic all its own.

The young and the more militant sections of the internal workers’ commissions will have a major role exerting pressure as transmission belts between an aroused and fighting membership and the inclinations of the leadership to reach accommodation.

As the leader of the nurses union, Lenin Hernández Navas, said on national television, “They have their plan, we have ours. Ours represents the Costa Rican working class. There are many more of us than them.”