The tearing down of statues and monuments to the U.S.’s most (in)famous historical figures has become an important act of rebellion throughout the movement against police terror and structural racism. While Trump and the establishment rush to protect the racist legacy that these monuments represent, protesters are tearing down these statues and revealing the truth about the United States — it has never been the “land of the free.” 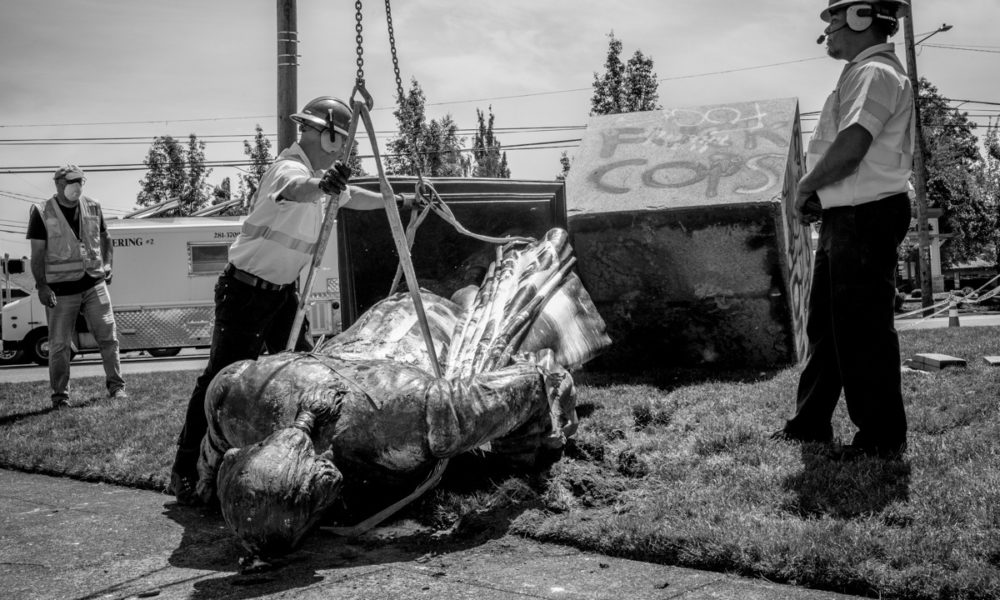 In 2017, Donald Trump was interviewed on CNN about the removal of Confederate monuments honoring the likes of General Robert E. Lee and other Confederate “heroes.” Trump compared taking down these statues to getting rid of monuments honoring George Washington and Thomas Jefferson. He noted that both Washington and Jefferson were “major slave owners,” and asked: “Are we going to take down his statue?” He condemned the intention of these acts as a ridiculous attempt to change “history…and culture.” But in a strange turn, Trump’s incredulous words became a prophecy a few days ago. Protesters in Portland toppled Jefferson’s statue last week, and a few days later, Washington’s statue was lying face down on the ground.

As the Black Lives Matter protests rage across America, the toppling of the statue of Washington is hugely significant. Unlike Robert E. Lee and other Confederate leaders, who are upheld by mainly Confederate diehards in the South, Washington is revered by many Americans as the first president and the “Father” of our country. Every American is taught that Washington was a great and virtuous leader, a courageous general who fought for American independence, and a patriot who embodied the best of America. His legacy is at the core of the socially-constructed narrative of America as a “great” country which stands for human rights and the American Dream, where all the people are guaranteed “life, liberty and the pursuit of happiness.” His legend is enshrined in statues, monuments, as well as in The Apotheosis of Washington in the rotunda of the US Capitol Building which depicts him as a god, rising to heaven in glory. His legendary status has not been challenged in such a publicly scornful and visceral way until now, when his statue was overthrown by Black Lives Matter protesters during a demonstration in Portland on June 19.

The recent murder of yet another black man, George Floyd, by four police officers highlighted the rot of the entire institution: of the Democratic Party leaders who turned a blind eye to police brutality, of the injustice system that dragged its feet to arrest the killer cops. This exposed the lies at the core of the official narrative of the United States. It has made clear to all Americans and the whole world that after 400 years, the evils of racism and white supremacy are still alive and well in America, from “sea to shining sea.” The significant gains of the Civil Rights movement, including the right to vote for Black people and the election of “Black faces in high places” (in the words of Cornel West) have not stopped the killing of Black people by racist police and white supremacists, or led to economic and social equality for African Americans.  Black people are still beleaguered by institutional racism and systemic inequality, which have deprived them of decent jobs, housing, health care, and quality education. The lies that racism and social inequality are past history, or on the decline, have been exposed by the recent report that 30% of people who died from the coronavirus are Black while Black people comprise only 12% of the total population. As reported by NPR, Black and Brown people are the hardest hit by the economic hardships caused by the coronavirus pandemic. More of them have lost jobs or had hours cut in comparison to white workers.

The murder of George Floyd and the pandemic have exposed the fault lines of racism, social inequality, and police violence across America.  The ruling elites have lost control of the official narrative of America. The multi-racial protesters out in the streets no longer believe it. They have seen clearly the brutal, inhumane killing of Floyd by a racist cop, who showed no mercy as Floyd pleaded for his life. Derek Chauvin, the cop, with his knee on the back of Floyd’s neck, refused to hear Floyd’s pleas: “I can’t breathe.” But the protesters have heard them.  They are rising up and demanding that no more Black, Brown or other people be dehumanized, destroyed, or killed for the color of their skin or for capitalist profit. This time, they are taking to the streets, determined that Black voices and demands for racial justice and social equality will be heard. During the first few weeks following Floyd’s murder, the people out in the streets for Black Lives Matter were brutally attacked by police with batons, rubber bullets, stun grenades, tear gas and pepper spray. But they kept marching, day after day, for 22 days and counting. Seventeen thousand National Guard members have been sent to patrol the streets of America, but “law and order” have not been restored — to the chagrin of the powers that be. Curfews have been imposed by the mayors of 30 cities, only to be broken daily by determined protesters. Trump’s threats to impose martial law and to designate Antifa as “terrorists” have only added more fuel to the fire burning across America. Over 11,000 people have been arrested, and still the protesters keep marching.

The BLM protests have spread around the world, as people in England, France, Spain, Germany, South Africa, Japan, Australia, and elsewhere don’t buy the American narrative anymore or their own countries’ narratives of racial equality. The reality that America is not great, and never was, has become clear through the fog of tear gas and protesters gasping for breath in the streets. The overthrow of Washington, Jefferson, and other “sacred” icons of American ideology presents a profound challenge to the chokehold we have lived under for far too long, stifling our lives and aspirations. What has emerged is the cold, hard reality of America for all to see — the systemic racism and injustices, the economic, social and political inequalities, the mass incarcerations especially of Black and Brown people, and the relentless class war which continues to oppress the poor and workers of all races.