The unemployment rate is at its lowest since 1991, but this “record” is based on precarious working conditions, attacks on labor rights and repression against workers. That is the essence of the “German miracle.” 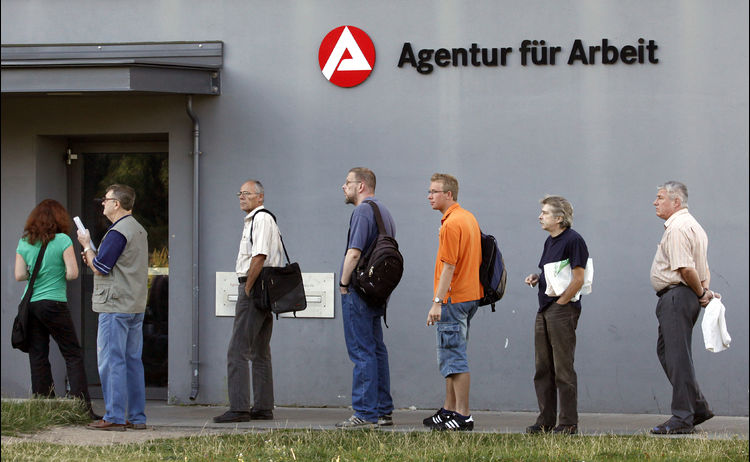 The bourgeois media is euphoric – in October 2015, the official unemployment rate is at its lowest level in 24 years. A total of 2.6 million people are officially registered as unemployed, representing 6 percent of the workforce. Since the 1990s, the rate had risen more or less continuously, reaching 4.8 million unemployed people at its height in 2005. But this “employment miracle” is rooted in widespread precarity, coercive measures and the worsening of working conditions.

Precarious Conditions and Covering Up Reality

The numbers cover up a very different reality. Excluded from the count are people over 58 years of age, as well as “One Euro” workers or people included in the Unemployment Office’s mandated measures. People who have given up on looking for a job are not tallied either. These are some of the tricks used to conceal unemployment. The Left Party estimates that one million unemployed people do not show up in the official statistics.

Beyond that, an even higher number of people suffer from precarious working conditions: contracts for a restricted period of time, dependent contracting, subcontracting and part-time jobs. It’s no wonder that the lowering of the unemployment rate began just after the “Hartz reforms” of the Schröder government (SPD) went into effect in 2004 which “modernized the job market,” as the official discourse went.

According to the Institute for Job Market and Employment Investigation (IAB) of the Unemployment Office, in 2014, 57.8 percent of women and 20 percent of men worked in part-time jobs. Compared to 1991, this constitutes a doubling of the rate for women and a quadrupling of the rate for men. Most workers in this category would like to work more, but are forced to work part-time, which is why this is a covered-up form of unemployment. In 2013, 1 million people sought out additional monetary aid from the state even though they held jobs. In summary, poorly-paid and precarious jobs are on the rise, lowering the unemployment rate. And Capital celebrates.

The low unemployment rate is also seen as a sign of German economic strength in times of worldwide crisis. The Chinese economy is slowing down rapidly, the price of commodities is falling, the financial markets are fluctuating, and the automobile industry was dealt a big blow by the Volkswagen scandal.

The relative stability of the current economic situation in Germany is on the one hand due to a regime of accumulation based on Agenda 2010 labor reforms; German capital was able to submit ever more people to situations of super-exploitation through the coercive measures of the Unemployment Office. The trade union bureaucracy played a major part, keeping workers passive while at the same time acting as an accomplice in the application of massive dismissals and precarious working conditions.

On the other hand, the stability is based on the imperialist influence of German capital in the European periphery and beyond. Germany, the “export champion,” subjugates foreign markets in order to sell its goods, which are produced by its precarious workers at very low cost and utilize exceeding capital.

But there are several ominous signs about the economic situation. In the last three months, orders have been down by 5.7 percent; there has not been such a significant fall since 2011. This clearly shows that the stability of the German economy can’t last in the context of the fragile situation of the worldwide economic crisis.

Most articles in the bourgeois press speculate on the impact of refugees on future unemployment rates. According to one survey, 44 percent of the population fears that unemployment will rise sharply due to the influx of refugees. The fact that the media is so thrilled about the current figures foreshadows a possible rise in unemployment in the coming years that will be used to divide the working class. But in contrast, the current situation of the labor market is an expression of the fact that capital has been increasing its profits on the backs of the exploited and oppressed in order to gain advantages in the imperialist competition. That is why the strengthening of our class enemy can never be favorable for the workers.

Unemployment means misery and exclusion for those who suffer it. It is a product of this capitalist system, which we can only overthrow together. The bosses can only “fight” unemployment through precariousness and cover-ups of the real numbers. Actual measures to counter unemployment would mean to directly attack their interests. That is why the simple demand of distributing the work among all workers (including refugees) with the same wage collides with the limits of the capitalist system.