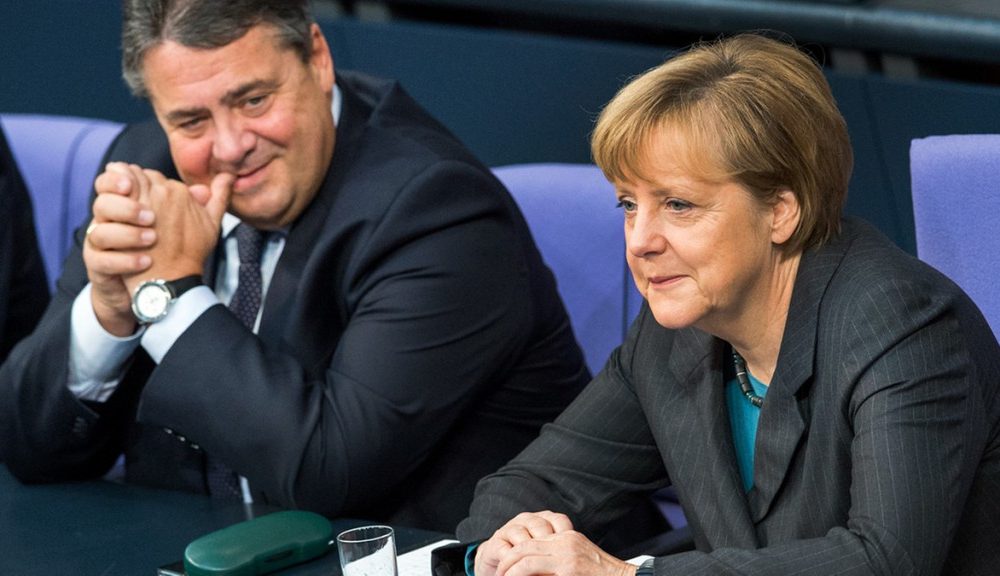 This is a translation of an article originally published in Klasse Gegen Klasse.

“Angela Merkel leads, the party follows.” The newspaper Süddeutsche Zeitung couldn’t have described the chancellor and CDU party leader’s appearance at the CDU party conference on Monday in the city of Karlsruhe in better terms. In her speech, she “shook the party’s soul”, according to Frankfurter Allgemeine Zeitung‘s opinion. With standing ovations after her speech, does this mean a reunited party?

The last months seem to have been wiped away. Merkel was under constant criticism by the right wing of the party as well as the sister party CSU. Her humiliation at the CSU party conference in November was not forgotten. And in the run-up to the Karlsruhe party conference, there was speculation of harsh debates. The CDU’s youth organization Young Union, the Association of Medium-sized Business Owners, and the Municipal Policy Union of the party wanted to impose their demand of a cap on the number of refugees admitted into the country into the guideline motion of the party conference. After tricky negotiations, the party leadership prevented the words “upper limit” in the guideline motion, but instead calls for a massive “reduction” of the numbers of refugees.

The fact that this distinction makes no difference was pointed out by none other than Merkel’s harshest (right wing) inner-party critic, Horst Seehofer (CSU) on Tuesday: “Contingents, upper limit, repatriation, reduction – we could call up linguists to explain the difference to us.”

Is the internal crisis over?

Nonetheless, Merkel now seems to be the big reconciler – once again. The so-called “refugee crisis” had brought her power into question for the first time in ten years. Internationally, her recognition as the leader of Europe has started to crumble as well. With the party conference, she was backed by all of her critics: only five out of 1000 delegates voted against the guideline motion.

Consequently, Merkel has regained the upper hand and sees her course strengthened – despite Seehofer’s (much quieter) criticism. But what the media is now hailing as the success of a “humanitarian course”, as the enforcement of Merkel’s “we can do it”, is nothing but the continuation of the anti-humanitarian and anti-refugee policies of the last months, enriched with the threat of tightening the laws even further.

Since last year, Germany’s asylum laws were tightened four (!) times. A new intensification is being discussed right now and could be voted upon at the beginning of next year. The “reduction” in practice means nothing but the further intensification of deportations, the fortification of the borders, and the continuation of inhuman conditions in refugee camps.

And while Merkel emotively expressed a commitment to the “dignity of the individual”, her bloodhound Schäuble gave it the proper context: limiting the immigration of family members. Thus, no “human dignity” for the dependents of refugees.
Merkel’s “we can do it” can thus only be distinguished in discourse, but not in its core, from the demands of the right-wing of the party. “We can do it” should be reformulated into “We can sell you the repression against refugees as humanitarian aid.”

The SPD party conference this weekend was not laureled in the same way. “Merkel knows how to deal with her party, Gabriel doesn’t”, as the Süddeutsche put it. The party conference was a “fiasco” according to them.

Gabriel, Germany’s Minister of Economy, was only reelected as party leader with 74.3 percent of the votes, and within the party his ability to lead the SPD in the next elections is being questioned. There also were quarrels within the party’s youth organization. Sigmar Gabriel is in no way as unchallenged as Merkel.

But this superficial glance fails to recognize the actual result of the party conference: The guideline motions to approve the free trade agreements TTIP and CETA were apparently passed by a large majority. Thus, Gabriel can move ahead with his most important political projects for the rest of the legislative period. Under no circumstances should the SPD allow doubts to be raised about its ability to govern, was his most important message.

This “There is No Alternative” logic had already swept away all internal party critics against the neoliberal Agenda 2010 and the right-wing course of the party leadership. The motions to assure the rights of workers – aside from vague formulas like “minimal standards” – did not pass. These “minimal standards” are a false compromise with which the left wing of the party was silenced. Why? Because they too don’t want to raise doubts about their ability to govern. The SPD will thus lead another attack on the working conditions of the working class with TTIP and CETA. Gabriel imposed his will.

Although the party leaders were confirmed in person and content, this doesn’t mean that the latent regime crisis in Germany would be overcome. Neither are the internal debates over for good, nor have solutions – not even in the interest of the bourgeoisie – been found for the structural causes of the crisis.

Even though the Euro crisis was contained somewhat by the capitulation of the Greek government this summer, it can break out any time, if the Greek workers’ movement strengthens their mobilizations and strikes of the past weeks.

But first and foremost, the refugee crisis continues. The racist and nationalist mobilizations led by AfD and Pegida continue unabatedly. The racist conditions in refugee camps, the planned mass deportations and the arrival of hundreds of thousands of more refugees in the coming months, alongside the German Military’s official entry into war in the Syrian conflict, will add more flames on the fire.

The government’s policy is the foundation of the strengthening of the radical right-wing movements. In order that they don’t take the offensive even further, we need to build a mass movement against the war and against the politics of isolation, against the slashing of democratic rights and against racism.