Chancellor Angela Merkel, together with the IMF and the European Central Bank, has succeeded, under extreme circumstances, in imposing draconian and humiliating economic conditions on Cyprus. In this way, Cyprus has avoided bankruptcy, which would almost certainly have led to it leaving the Eurozone immediately. 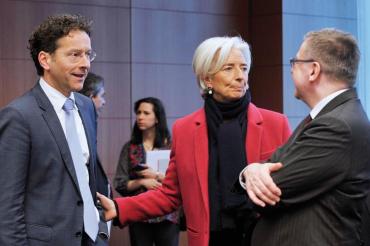 The plan is as harsh as the previous one, which was rejected by parliament last week, with only some minor technical modifications. In exchange for not affecting small savers, it imposes fees on large depositors (including many rich Russians) and other investors, and restrictions on the movement of capital. The losses are going to be substantial despite the fact that in the weeks before bank accounts were frozen there was apparently a large scale flight of capital, as the government’s plans were leaked to the Russian and local oligarchs. With the decision to liquidate the Laiki Bank, the second-largest bank in Cyprus, the Eurozone leaders have for the first time since the beginning of the euro crisis at the end of 2009 refused to come to the aid of a financial institution. The entire banking sector will be restructured, putting an end to the island’s business model. The agreement does not require parliamentary approval.

Although the article ‘A new phase in the crisis of the euro’ was written before this agreement, when there was uncertainty over the fate of Cyprus, it is still relevant today for the following economic and political reasons: