Yesterday in the German city of Hanau, a Nazi murdered nine people in shisha bars. Bourgeois media are presenting this as a crime by a mentally ill loner. But it is an expression of a wave of right-wing terrorism sweeping the country. 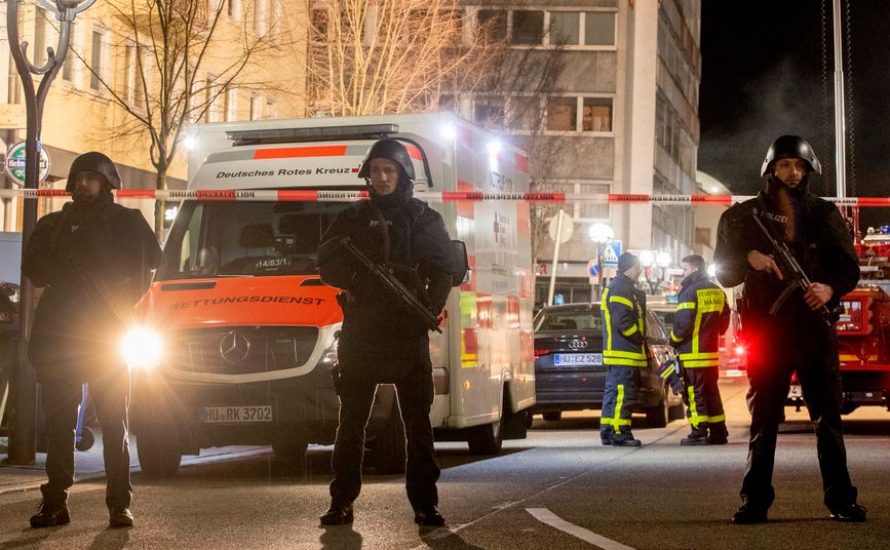 On Wednesday night in the German city of Hanau, a 43-year-old man who published bizarre rants against immigrants on Youtube murdered nine people and injured at least four others. Police later found two further bodies in an apartment, of the terrorist and his mother. The victims were in two shisha bars in the city 15 miles away from Frankfurt, where people of all nationalities come to smoke water pipes, especially people of Turkish, Kurdish, Arabic, Iranian, and Balkan origin. A number of the victims were Kurdish people.

Tobias Rathjen, the terrorist, left behind a sort of manifesto in which he wrote that certain nationalities need to be eliminated, since they can no longer be deported from Germany. In their first reports, police spoke of a “shooting” with no reference to the shooter’s right-wing motivation.

The bourgeois media are presenting this as a crime by a mentally ill loner. But it is not an isolated incident. Germany has been experiencing a dramatic shift to the right. Recently the CDU, the conservative party of Angela Merkel, voted together with the extreme-right AfD in the state of Thuringia to prevent a left reformist prime minister from being elected.

This political shift to the right is inspiring an unparalleled wave of racist violence. There have been hundreds of attacks on refugees homes. It is just a three months since a Nazi terrorist attacked a synagogue in the city of Halle. Last year, a CDU politician in Kassel who had spoken out in defense of refugees was murdered by a Nazi. Just a few days before the attack in Hanau, police raided the homes of 12 people preparing to attack mosques like the terrorist in Christchurch. Hanau and the surrounding state of Hesse has long been a bastion of Nazi structures.

Sometimes it appears the German police are inactive against right-wing terror. But the reality is far worse: Germany’s state apparatus, and especially its domestic secret service, is permeated with fascists. Every few weeks, new Nazi cells are discovered in the police or in the army. For ten years, the Nazi cell called “National Socialist Underground” (NSU) was able to murder nine immigrants. Not only did the police ignore them, but agents of the “Protectors of the Constitution” (as the German domestic spy agency is called) were active in the NSU’s periphery.

The “Protectors of the Constitution” are theoretically responsible for combatting fascist groups. In reality, however, the agency was founded by former Nazis and instead harasses the Left and even climate strikes. This was reflected by Hans-Georg Maaßen, the former head of the agency and a politician from the CDU, who reacted to the terror in Hanau with a disturbing tweet against “socialist logic: terrorists are always right-wing and victims are always left wing.” Sigmar Gabriel, the former head of the social democratic SPD who is now a lobbyist, similarly pointed out on Twitter that “left-wing extremists” were also dangerous because they set dumpsters on fire and similar things. Even in the face of such racist murders, the German establishment directs its attention to the Left.

The terrorist in Hanau might have planned the murders by himself. But he was just repeating conspiracy theories that are presented on public TV and in the biggest newspapers. Members of the German parliament from the AfD talk about a “great replacement” of white Germans with immigrants, organized by dark powers. Rathjen was just taking this mainstream conspiracy theory to its logical conclusion.

Tens of thousands of people joined anti-fascist demonstrations on Thursday evening. In the Berlin neighborhood of Neukölln, for example, thousands of people demonstrated down the Sonnenallee, a street with lots of Arabic cafés and people from all over the world. Two years ago, the AfD began denouncing the streets shisha bars as supposed mafia locales. The local government, led by the SPD, responded to this right-wing pressure by organizing massive police raids in the street. They found no evidence of criminal activity in the bars — but created a public image that these kind of cafés are dangerous.

A real response to the right-wing terror can only be independent from the institutions and parties of the German regime. At the Berlin demonstration, the city’s social senator, Elke Breitenbach from the left party Die LINKE, spoke about the need to welcome refugees. But as the following speaker, Yunus Özgür from the website Klasse Gegen Klasse (sister site of Left Voice) pointed out, the Berlin government might use slogans against racism, but is also responsible for deporting people every single day.

But the working class in Germany is made up of all nationalities. It is this working class that oppose the racist, neoliberal policies of the establishment parties with a united class front.