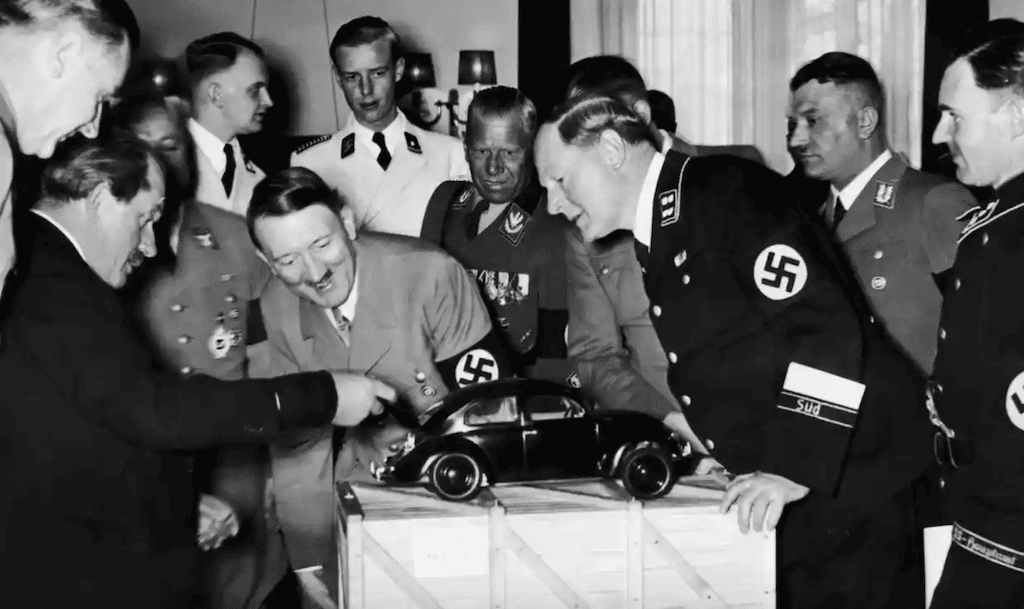 The theory of capitalism, if I’m understanding it right, goes something like this: the most talented, innovative, hardworking people will be successful on the market and thus accumulate wealth. Resources flow to the people who can make the best use of them.

Yet capitalism’s proponents, looking at Germany today, have to answer an uncomfortable question. Why are so many of the richest people the children, grandchildren, and great-grandchildren of Nazi war criminals? Some of Germany’s richest people, for example, include the twin grandchildren of the ruthless Nazi tycoon Friedrich Flick, who first became billionaires when they were seven-years-old. Were those school children really working that much harder than everybody else?

In reality, of course, rags-to-riches stories exist mainly in propaganda. The majority of capitalists were born as capitalists. No capitalist has clean hands, but the family trees of German industrialists inevitably lead into a brown swamp. Just two generations ago, over 20 million people were enslaved by the Third Reich to work for German industry.

The Bloomberg journalist David de Jong spent four years researching the stories of five of Germany’s biggest dynasties: the Quandts, the Flicks, the Von Fincks, the Porsche-Piëchs, and the Oetkers. Their patriarchs were the wealthiest people in Nazi Germany. After de-Nazification, these former Nazis remained the richest Germans. In the 21st century, their descendants remain among the country’s most powerful clans. The author published a summary of his work on the New York Times opinion page.

I thought I was familiar with the myriad ties between Germany’s capitalists and fascists — check out Daniel Guerin’s excellent book Fascism and Big Business, for example. But I hadn’t realized that Günther Quandt, whose heirs control BMW today, was the ex-husband of Magda Goebbels. Yes, two of Germany’s richest people are not-so-distantly related the Nazi propaganda minister.

De Jong’s writes in a lively journalistic style — most historians would benefit from a stint writing at a newspaper. (A problem, however, is that the book lacks footnotes, and the extensive sources are only listed at the end.) In vivid detail, he explains how these five dynasties were built up with the sweat of concentration camp prisoners. Unfortunately, though, the book fail to ask the big question: Why did Germany’s capitalists support Hitler? Were they simply evil, the product of a German Sonderweg, or was there more to it?

For the German capitalists, fascism was just a business decision. After the crisis of 1929, Germany’s ruling class looked on with desperation as the traditional pillars of capitalism eroded. Unemployment ate away at the trade unions and the Social Democratic Party, and workers turned sharply to the left; the crisis also ruined the petty bourgeoisie, who abandoned their traditional conservative parties and turned sharply to the right. From the point of view of the wealthy, Nazi stormtroopers were a last line of defense against revolution.

The German bourgeoisie didn’t necessarily want to hand over the reins of the state to a former corporal like Hitler. But as Leon Trotsky famously wrote, the bourgeoisie dislikes fascism “much as a man with a swollen jaw dislikes having his teeth pulled.” It’s not pleasant, but in a crisis it can be the least bad option.

As their traditional parties fell apart, the capitalists started funding Hitler with millions of reichsmarks (as did U.S. capitalists). Hitler had a clever pitch to these tycoons: they were convinced that their businesses required iron-fisted leadership. So why should the state be run according to democratic principles? As Hitler put it in a speech to industrialists: “Private enterprise cannot be maintained in the age of democracy.” The people in his audience — including Quandt, Flick, von Finck, and other capitalists — agreed, and gave the NSDAP millions for an election which Hitler said very openly would be the last.

This decision was extremely profitable. Over the course of the war, the tycoons joined the Nazi Party. They benefited from “Aryanization” (forcing Jewish owners to sell off their assets at reduced prices), state contracts for armaments, and slave labor from concentration camps. All of them got fabulously wealthy supplying the Nazi war machine.

Today, the “brown heirs” (the German title of de Jong’s book) remain among the richest people in Germany. Are they responsible for the crimes of their ancestors, committed before most of them were even born?

After spending 400 pages detailing the most horrific crimes in history, de Jong’s proposals for restitution are surprisingly moderate. He writes that the heir should “commit fully to historical transparency and moral responsibility, and … strive, unconditionally, to repay to society the enormous debts their fathers incurred.” Concretely, all he’s asking for is that foundations named after Nazi war criminals be renamed, or at least acknowledge their history.

He gives a nod to the Fritz Thyssen Foundation for being “transparent” about the war crimes committed by its namesake — his biography was actually titled I Paid Hitler. And there is more praise for the Reimann clan, who produced the famous headline when they bought Einstein Bros: “This Is Embarrassing, but It Turns Out Our Fake Jewish Bagel Chain Was Funded by Nazis.”

Two generations after the war, some of these companies have started paying historians a few million euros to investigate their past. And hey, I’m all for subsidizing historians! But if this is supposed to be historical justice, the step seems almost comically small. Imagine I murdered someone in order to steal €5,000. Would justice be served if my grandkids donated €5 to print a brochure saying murder is wrong? That’s the proportions we’re talking about when a multi-billionaire pays €7,000 to a handful of surviving slave laborers — not even retroactive minimum wage.

A simpler solution is obvious: expropriation. If someone robs a bank, the loot gets confiscated by the state. This principle should apply to the biggest crimes in human history. Why should the Quandt siblings, the grandchildren of a war criminal, run BMW? Neither of them are not car designers, nor managers, nor accountants. Their “job,” if it can even be called that, is to own lots of capital. Couldn’t BMW’s 100,000 employees perform said “job” just as well? Couldn’t we all do it together, democratically?

1933 reminds us of the extreme dangers of concentrating so much wealth in just a few hands. Today, billionaires around the world tend to be ultra-conservative. While the original Nazi Billionaires helped put Hitler in power, their children and grandchildren continued to finance far-right causes. In the late 1960s, the Flicks and the Oetkers were donating to the neo-fascist NPD. In the 1980s, Friedrich Karl Flick was involved in the biggest corruption scandal in post-war German history. and more recently, August von Finck was giving illegal donations to the semi-fascist AfD. Germany might not even have a far-right party in parliament today if it weren’t for secret backing from right-wing billionaires.

Criminal behavior forms a pattern. Today’s Quandts, Porsche-Piëchs, and the other auto tycoons are responsible for “Dieselgate” — a years-long, deliberate fraud against the environment. Frankly, it feels like these Nazi heirs are about the last people who should be making big economic decisions. They are forcing us to stick with individual car transport and monocultural forests, even as this contributes to climate catastrophe.

I would really like to hear the counter argument: Why should Germany’s wealth be in the hands of the heirs of Nazi war criminals? I’m sure some capitalist ideologue out there would be happy to try and justify this. I just cannot for the life of me think what their reasoning would be.