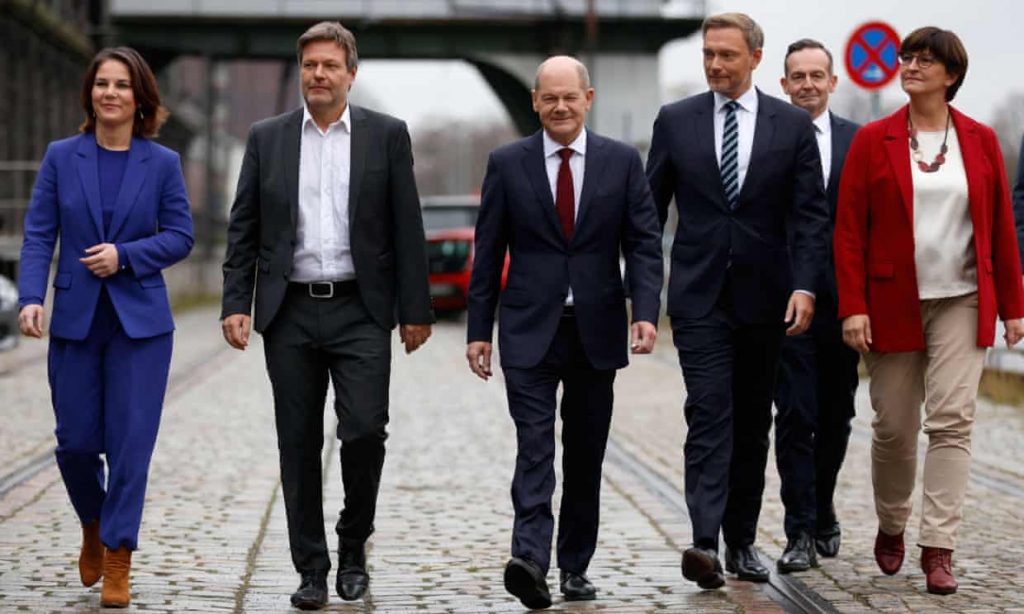 Germany is getting a “center” government with Olaf Scholz of the SPD as chancellor, joining a coalition with the Greens and the neoliberal FDP. A reference to the parties’ combination of colors — red, yellow, and green — it has already been nicknamed the “Traffic Light” government. The new administration’s slogan is “Dare more progress,” an attempt to set itself apart from the conservative years under Merkel. The slogan is based on the former SPD chancellor Willy Brandt’s slogan “Mehr Demokratie wagen” (“dare more democracy”), which he used in 1969 to emphasize a break with the politics of the conservative post-war period.

At the end of the negotiations to form this new coalition, Traffic Light presented a 178-page report, which, despite their promises of progress, shows that much will remain the same. Nothing will change with regard to the lack of care workers, poverty among the elderly, precarization, rising rents and energy costs, and the rearmament of the Bundeswehr. Finance Minister Christian Lindner of the FDP will be the lastest to advocate a strict neoliberal course for the economy.

This is not to say that the Traffic Light government will not make good on any of its promises. Especially in relation to socio-political and democratic issues, it wants to paint itself as an “alliance for freedom, justice, and sustainability.” For example, the abolition of §219a of the penal code, which until now has prevented doctors from informing people that they can perform abortions, was rightly welcomed by many. However, §218 still remains, ensuring that those who getabortions are only exempt from punishment if the procedure takes place before the twelfth week of pregnancy or for important medical reasons; otherwise one can face prison time. Germany’s stringent Transgenderl Law, which stigmatizes trans people who attempt to have their legal documents changed to reflect their identity and names, is also to be replaced by a new law lifting some of the legal hurdles that prevent trans people from changing their documents. The new government also has plans to lift a ban on blood donation for transgender people and men who have sex with men. The government has also signaled that it is considering lowering the voting age to 16, as well as making naturalization easier and legalizing multiple citizenship. The Traffic Lights also want to legalize cannabis, but this will not include the decriminalization of other substances.

All these reforms are not simply concessions by the coalition partners, but the long overdue result of struggle from below. Many people will benefit from these reforms; however, they show above all how conservative the Merkel government was on social issues.

It is therefore all the more remarkable that in questions of asylum and migration the Traffic Light government cannot claim to be so “progressive.” In militaristic language, their joint program announces a “repatriation offensive” on the basis that “Not every person who comes to us can stay.” They want to “effectively reduce irregular migration” and further develop the EU border protection force Frontex into a “genuine EU border protection agency.” The government has long since dropped all its humanitarian phrases from the election campaign. The traffic lights know that they have a strong right-wing opposition in the conservative Union Party and the radical right AfD, and its sharp rhetoric on the migration issue shows that they are trying to appeal to the right.

As expected, Germany’s Labour Ministry is now controlled by the Social Democrats. The SPD has ensured that its central campaign promise, the 12-euro an hour minimum wage, will be included in its program. Many workers in the low-wage sector, a sector which the SPD and the Greens themselves expanded under former Chancellor Gerhard Schröder in the early 2000s, will benefit from this. But in view of the current inflation of up to six percent in November, even this wage increase will only give low-paid workers a brief respite. The traffic lights also announced that they would redesign the basic benefits program for the unemployed; in reality the situation will remain largely unchanged.

At the same time, the traffic lights also announced some first attacks: On the basis of collective agreements or company agreements, the maximum daily working time may be extended. Tax-subsidised part-time jobs are also to be expanded, displacing regular employment contracts.

The traffic lights have maintained that they will not raise the retirement age and will maintain current levels of pensions — as many pensioners are already living below the poverty line today. However, at the request of the FDP, part of the pension program is to be funded by capital, which is a step towards further privatization. Instead of state insurance for retirees, the market will regulate pensions.

Though the Greens are now a part of the governing coalition, climate change has hardly made an appearance on the government’s new agenda. While the traffic lights promise that achieving the goals set out in the Paris Agreement is a “top priority,” the government has hardly offered any concrete plans.

The government has promised that the deadline for ending the use of coal energy in Germany will be brought forward from 2038 to 2030, but only “ideally.” — the promise is not binding.

Fridays For Future already announced in a statement shortly after yesterday’s press conference that the new government’s program would not be able to achieve the goals of the Paris Agreement. Even Luisa Neubauer, prominent member of the Green Youth and the environmental movement, found critical words for the government’s agenda for climate change.

A Hardline Stance on Russian and China

The foreign affairs program of the new cabinet will be led by Annalena Baerbock. Despite “girl boss” rhetoric, one should not expect a “feminist” foreign policy to come out of Baerbock’s agenda. The clearest sign of this is that the traffic lights are planning to acquire armed drones for the Bundeswehr. Cathryn Clüver Ashbrook, director of the German Council on Foreign Relations, calls this “new realism.” We should see this for what it really is: Rearmament.

The true nature of Germany’s new foreign policy can also be measured by how the future right-wing opposition reacted to it: CDU/CSU deputy parliamentary group leader Johann Wadephul was surprised by the “realistic approach to questions of security and defence policy.” The right celebrates the fact that the new government wants to maintain Germany’s nuclear participation, after prominent voices in the SPD had also been raised last year wanting to end Germany’s participation in NATO’s nuclear deterrent.

Overall, there are signs of a renewed rapprochement with the United States, with a tougher stance towards Russia and the designation of the relationship with China as a “systemic rivalry.” However, the Traffic Light leaves open the question of how the new federal government will deal with controversial issues such as the future of the Nord Stream 2 gas pipeline – Baerbock is considered a fierce opponent of the German-Russian cooperation project.

For the parties joined together in the Traffic Light, the task now is to make the results of the negotiations palatable to their members. While the SPD and FDP want to hold party congresses to decide on this, the Greens are holding a mail-in and online member vote. In early December, Olaf Scholz will be elected to the position of Chancellor in parliament.

All three parties have included points that they will present as “successes” to their respective bases: for the Greens, a strong ministry for the economy and climate protection and the examination of legislative projects for compatibility with climate goals; for the SPD, the minimum wage, rent control, and the preservation of pension levels; for the FDP, above all, financial and tax policy, but also funded pensions.

Despite all the understandable joy about real improvements promised by the Traffic Light, in the end we should have no illusions about the new government. In many ways, it has signaled that it will be a continuation of the Merkel years and has some tangible attacks on the conditions of the working class in mind. This cannot be, by any means, a reason to rejoice; instead we must organize to beat back these attacks when they come.

We cannot forget: The new government’s program is not an actual contract with obligations and therefore it does not necessarily dictate actual government policy. So it is not impossible that in the end the specter of a former SPD chancellor will emerge: Gerhard Schröder. At its inception, his red-green coalition described itself as a government of renewal. In the end, his government launched one of the biggest attacks on the working and living conditions of the working class and oppressed of Germany, implementing new labor market laws and sending the Bundeswehr to war.

First published on November 25 in German in Klasse Gegen Klasse.