The strike at General Motors in the U.S. is entering its third week. GM is a global corporation that employs workers in 140 countries. International strikes are necessary to win real gains. 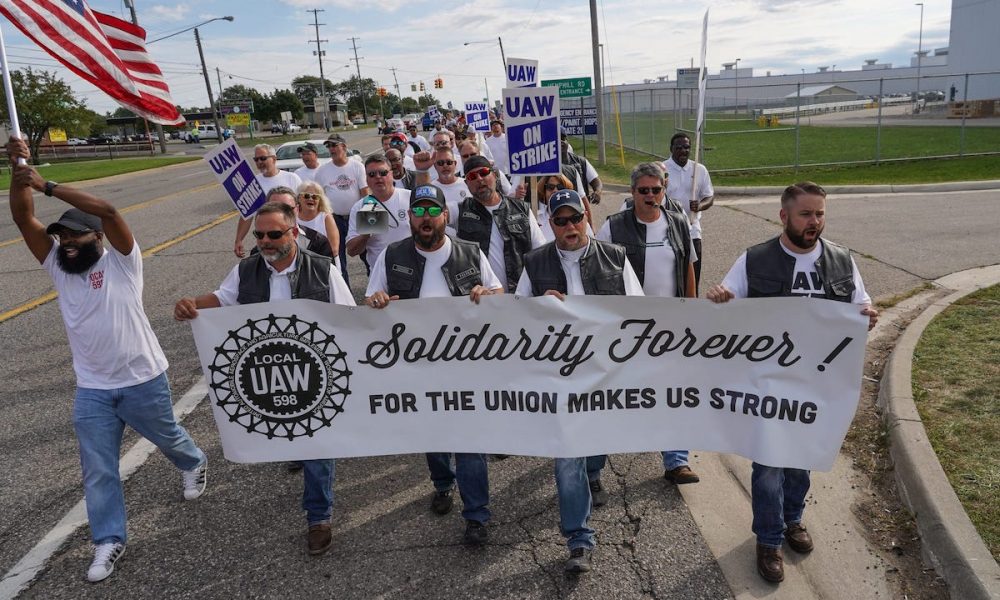 As tens of thousands of GM strikers stand in picket lines, they are expressing the basic ideas of the workers’ movement: strength in numbers; unity in action; solidarity. To fight successfully against the auto bosses, workers need unity. When full-time and part-time workers, workers of all races, genders and ethnicities come together, the union is strong. And conversely, when workers are divided amongst ourselves, that’s when the boss tends to win out.

The labor movement has kept the idea of solidarity alive, and that idea is being tested by today’s GM strike. Fiat Chysler and Ford workers have joined the GM picket lines in many places because they know they are in a common struggle against the Big Three automakers. Teamsters have vowed not to transport struck GM vehicles out of solidarity. Amalgamated Transit Union (ATU) local 241 of Chicago participated in a caravan of solidarity, driving over two hours to the Fort Wayne, Indiana GM assembly plant to join UAW local 551’s picket line. Examples like these are common because union activists are holding up the motto “an injury to one is an injury to all.” And while solidarity efforts like these are often ignored by mainstream media, they are indispensable for winning.

Solidarity messages have also come in from abroad, demonstrating that workers’ solidarity need not be confined to national boundaries. Auto workers from the Brazilian Conlutas union federation posted a video solidarizing with American UAW workers currently on strike. Similarly, Mexican auto workers from the GM factory in Silao wrote a letter of support to fellow GM workers in the U.S. South Korean GM workers, who are at this moment fighting against precarious work and for the reinstallment of laid-off workers, sent their solidarity as well. And the powerful displays of international solidarity should make us question: why have so many U.S. unions, including the UAW, embraced “America first” rhetoric? The majority of GM workers are currently living outside the United States, how much solidarity are we going to show them?

Many UAW members may be familiar with the mechanism by which companies use cheap labor to drive down wages. This phenomenon exists within GM plants in the form of second-tier and temp workers, as well as regional wage differentials, whereby union workers earn more in the Midwest than they do in the mostly non-union southern states. Additionally, the auto bosses and other capitalist interests have historically paid women, Black people, immigrants and other sectors below the prevailing wage as a means of dividing the workforce and exerting a downward pressure on wages. This is achieved through straight up paying less for the same jobs or, more commonly, by segregating women and Black workers into the lowest paid positions. Women continue to make twenty percent less than male workers on average, despite doing the same jobs, while the wage disparity is even greater for Black workers. The union movement has done well when it has supported equality among its members.

Yet there are huge sectors of auto workers internationally that have been completely ignored by American unions. For instance, Mexican GM auto workers face starvation wages of $2 per hour, typically working 12 hour shifts. Auto workers are paid equally abysmal wages in many other regions in the Global South. Thus, if the American labor movement is to reverse the downward pressure on wages, which is why the auto companies outsource factories in the first place, we must embrace our fellow workers around the world who are fighting the same broad fights as UAW members.

An inspiring example of international labor collaboration took place in Sao Paulo, Brazil last month. Industriall-union.org, of which the UAW is listed as an affiliate, reports that GM auto workers from Colombia, Argentina, and Brazil met on August 13 to discuss a united campaign against the casualization of the company’s auto production in Latin America. GM is threatening to close its operations in many regions in South America, which would devastate the workforce there. But UAW was nowhere to be found. Instead of prioritizing international collaboration and solidarity, the UAW leadership focuses exclusively on American auto workers, and no one else. Such attitudes are reminiscent of the old craft guilds that refused to organize along industrial lines. “America first” protectionism is the old guild mentality writ large on today’s international landscape of auto production. Workers can do better.

UAW has shown solidarity before. It must again.

In 2017 and 2018, the UAW sent delegations to South Korea to show solidarity with imprisoned Korean labor activists. The UAW’s often-ignored publication, Solidarity Magazine, explained why:

The UAW joined labor unions from around the world, including IndustriALL, a global union federation which represents over 600 unions in the manufacturing sectors. The unions were there to support the Korean labor movement and demand the release of KCTU President Han and KCTU General Secretary Lee Young-joo.

The union continued this important solidarity initiative in 2018, when it again sent a delegation to South Korea to petition for the release of the jailed labor activists. Such international solidarity must be extended to include workers in Mexico, China, and beyond.

Visits by union leaders are not enough, however. Bureaucrats will often make statements of solidarity without organizing any militant actions that involve the membership in the struggle. Rank-and-file workers need to get to know their fellow workers from different countries, and begin to coordinate strike action across borders. This is what is happening with Amazon workers in Europe, for example, despite union leaders putting on the breaks. Immediate things that GM workers in the U.S. could do is to reciprocate the type of solidarity that has been shown to them by South Korean and Mexican workers. GM workers in South Korea are going on strike against outsourcing. We need to work towards unified international strikes. This means calling on union leaders to do this—but also working to link of the rank-and-file.

The Billionaire Class is the Enemy

Today’s political climate is more polarized than it has been in decades. Working class communities across the country are divided by political affiliation, by religion, by skin color, and by legal status. Many other demarcations keep us separated. And while it may be challenging to imagine an inclusive, proud, militant working-class identity that unites us all in solidarity and respect, it is obvious that today’s divisions only help the billionaire class keep control. If working people united, what need would we have for the wealthy employers feeding off of our blood and sweat?

Immigration, and the broader question of how the U.S. relates to other countries, has become front and center of American politics today. Xenophobia has poisoned the hearts of many American workers in recent years. Instead of solidarizing with migrants who have been forced to flee their native countries due to extreme poverty and instability, many American workers have joined in Trump’s hateful blame games, imagining migrant workers are somehow the enemy of native-born workers. This type of anti-immigrant attitude is premised on the false assumption that American workers need to fight with other workers for a slice of the ever-shrinking economic pie.

Instead of using the boss’s logic, whereby workers compete with each other along national lines, why not work together, as part of the international working class, to improve the lives of everyone? Every sector of workers can have a piece of the pie if workers run the kitchen. Why not fight for quality, union jobs for all? Why not reject the fear-mongering of the anti-union media, and embrace our fellow workers wherever they reside? If workers everywhere worked together on the basis of class solidarity and mutual uplift, there would be no need for detention camps, border patrols or military conflicts over resources. That is the vision that scares the auto bosses most.