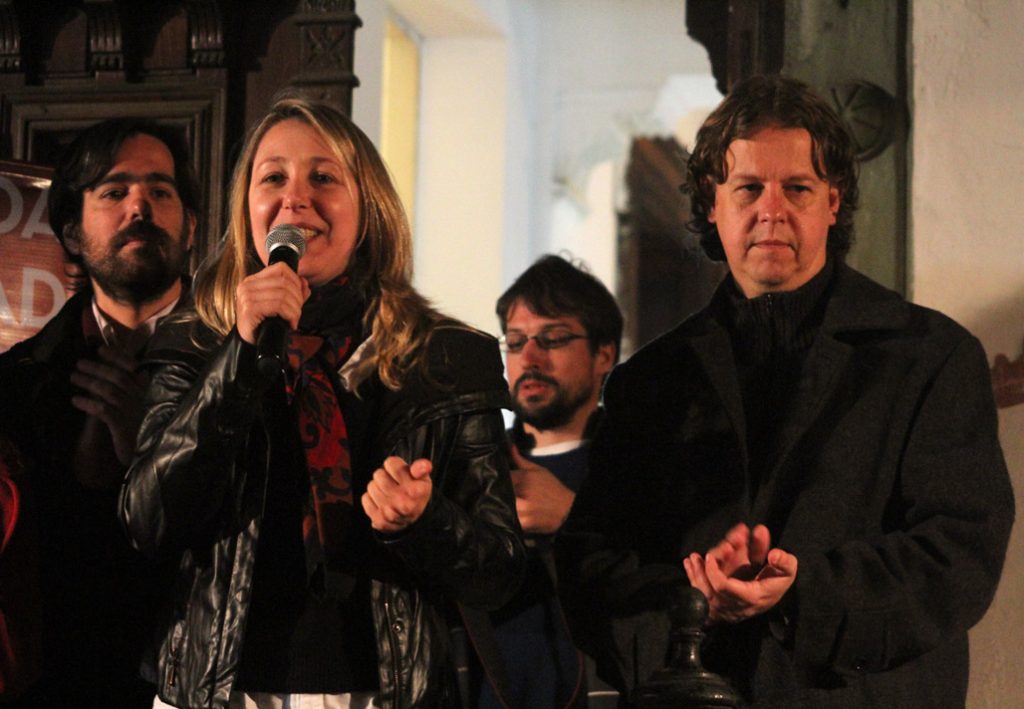 Horacio Rodriguez Larreta from the PRO (right wing party) won the election for mayor with 45.5% of the vote. Lousteau from ECO came in second place and Mariano Recalde from the Victory Front (FPV, Kirchner´s Party) was third.

The left grew in its number of votes compared to the primary elections with 3.9% for Luis Zamora (from Self-Determination and Freedom, AyL) and 3.1 % for the FIT (Left and the Workers’ Front) in the election for city Mayor. Both organizations gained seats at the local legislature (AyL won 4% and the FIT won 4.7 %, adding a new FIT legislator to the bench).

The final decision for city mayor will be the result of a run-off election in two weeks. Voters will only get to choose between the the first two candidates: Larreta and Lousteau.

In a press conference, Myriam Bregman (Partido de Trabajadores Socialistas – FIT) outlined that although the two leftist parties faced heavy pressure from the mainstream parties they were still able to grow (together winning 9 % of the vote). She also emphasized that the FIT had good results throughout Argentina, winning deputies in 8 provinces.

When asked about about her position on the second round next July 19, Myriam Bregman stated, “We call for people to cast a blank ballot: both candidates, Larreta, and Lousteau have the same political foundation, one which favours big businesses and bosses. Their national leader is Mauricio Macri, presidential candidate for the PRO. In contrast, we are on the opposite side; we fight for workers’, women’s, and youth rights. The Blank ballot will be counted and is the best option to reject both bourgeois candidates and their anti-worker policies”.

The Left and the Workers’ Front had excellent election results in Cordoba province last Sunday with 4.98% for City Mayor and 6.36% for provincial deputies putting the FIT in 4th place.

Laura Vilches (PTS), the current legislator, has been re-elected for the next four years. Eduardo Salas (PO) will also have a seat at the Provincial Congress, and a third seat will go to Ezequiel Peressini (IS).

These results show significant growth compared to the 2011 presidential election and the 2013 legislative elections.

One of the key components of the PTS candidates campaign for the FIT primaries is that most of them are workers from diverse factories and workplaces – leaders of militant unionism.

Del Caño has presented himself as a candidate for President, and will be joined by Myriam Bregman as candidate for Vice President in the upcoming primary elections for the Left and Workers’ Front.