Thatcher: Goodbye, the working class and the oppressed of the world are not going to miss you 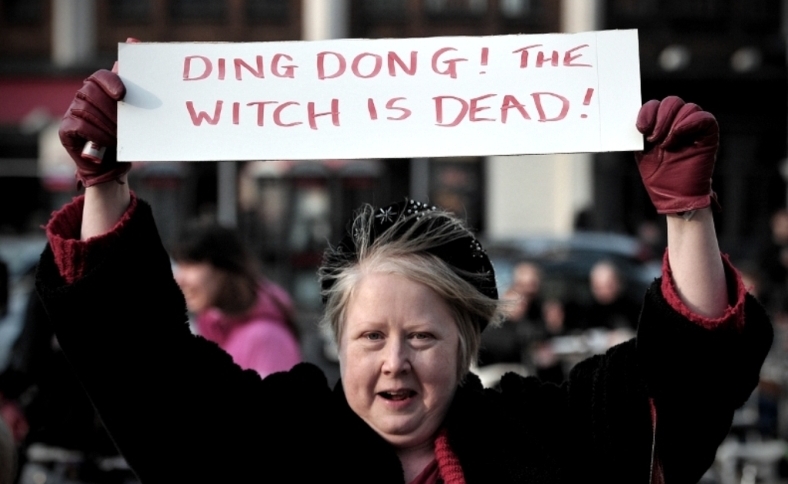 When the news item became known, in Brixton (a neighborhood in South London), in Glasgow (Scotland), and certainly in more than one miners’ town, many people went out to the street by way of celebration. In contrast, most of the representatives of the British bosses’ parties and of the imperialist governments were lamenting her death and praising her as a great political figure.

In this counterpoint, on the one hand, the hatred that she elicited among the working class and the oppressed of Great Britain and the world, and, on the other hand, the admiration and the salutes that the employers and imperialist politicians are giving, mark the legacy of Margaret Thatcher. As her years of governing in England were marked by a series of social and economic counter-reforms with the aim of reversing the conquests obtained by the workers’ movement during the years of the postwar boom, and, under the banners of the free market, profoundly transforming the British (and world) economy, beginning with economic deregulation, by favoring the advance of financial capital and by imposing greater exploitation of the workers’ movement, in order to guarantee capitalist profits.

The arrival of Thatcher in government occurred in the context of a Great Britain shaken by the economic and social crisis, marked by workers’ dissatisfaction with the Labour government. As a response to this situation, a series of austerity policies and cuts in public spending was launched (as a precedent, Thatcher herself, when she occupied the post of Education Minister, had eliminated the glass of milk for the children in the schools, with which she gained the nickname “milk snatcher” [“Margaret Thatcher, milk snatcher”] for herself). The first years of the Conservative government were not exempt from workers’ and popular struggles; the growing recession, because of the austerity policies, added to the rise in taxes, was the fuel for the riots (revolts) in 1981, which were centered on the neighborhood of Brixton (in south London), one of the neighborhoods most punished by unemployment and poverty, added to police violence against most of the Black population. The revolt was harshly repressed, and, in view of this, Thatcher’s response was a failure to recognize unemployment and racism as causes of dissatisfaction, and that there was nothing that justified “violence in the streets” by the demonstrators.

After the first years, Thatcher found herself in a situation of instability, a result of the growth of unemployment and the economic recession, intensified by the austerity measures. During that period, two big events took place that would strengthen her government.

The first was the hunger strike by the IRA political prisoners in Northern Ireland, at a time when Thatcher had headed the repression against the independence movement. The demand that political prisoner status be recognized for the militants for Irish independence was refused by the British government. After 66 days on a hunger strike, Bobby Sands, an lRA leader, a prisoner that had been elected as a Member of Parliament during his hunger strike, passed away. This triggered a wave of protests, to which the Prime Minister responded by hardening her position. Finally, after the death of 9 more prisoners, the hunger strike was lifted. The British press praised the handling of the strike as a victory for Thatcher, saying that she “had overcome the hunger strikes by showing a resolute determination not to be pushed around.”

The second event was the victory in the war over the Malvinas Islands and the advance in defense of British interests (a colonialist outpost), disguised behind talk in many cases about war between the imperial British democracy and the Argentine military dictatorship. The imperial military advance, that had the invaluable support of the United States and of the Pinochet dictatorship, confronted an Argentine government that refused to attack imperial interests, being more concerned by the anti-imperialist process that could open up in the region than by being defeated by the British.

With the victory in the Malvinas, the Thatcher government achieved new support that permitted her to move forward with economic reforms, the privatizations of state-owned companies, financial deregulation and the attack on the workers’ conquests. The 1984-1985 miners’ strikes signified the acid test in the Thatcherite effort. The closing of 20 mines triggered a wave of workers’ strikes in the mining sector throughout Great Britain. It was necessary for the government to send military detachments from other cities to repress the miners, because the police from the miners’ cities refused to repress the workers. After months of heroic workers’ resistance, the strikes were defeated, a result of the policy of the union bureaucracy, that was incapable of confronting the breadth of the employers’ attack. This opened the way for Thatcher’s reforms, with new privatizations (the selling off at will of the treasures of the empire) and new attacks on workers’ rights (for example, the impossibility of solidarity strikes, the obligation to approve strikes or measures of struggle by mail and not in an assembly, etc.), reforms that were kept by the Labour governments that followed her.

The attack on the workers and their organizations (during her election campaign, Thatcher stressed that she had to put an end to the power of the unions, that were trying to run the country) was not accidental; in order to change the pattern that had ruled England during the post-war years, when the bourgeoisie managed to keep the social peace in exchange for giving concessions to the workers’ movement, it was necessary to defeat and weaken the unions.

The final years of government were marked by the attempt to impose the poll tax (a tax on every individual), the refusal by a part of the population to pay it and the attempt by the government to keep it; it aroused a process of struggle against the imposition of the tax (in Scotland, a broad process of massive mobilization took place; the celebrations these days in Glasgow are from that). On the other hand, the English bourgeoisie began to reorient to a more open policy towards Europe, and Thatcher’s intransigence turned her into an obstacle for those plans. By then, the task of the “Iron Lady” was accomplished, and it would be kept by the governments that would follow her.

Thatcher’s legacy should be measured by the transformation that occurred during her government in England, and also by how, next to Reagan, they represented the advance party that was known as the “conservative revolution” against the workers’ movement and the conquests achieved by it. The change introduced meant abandoning the policies of the postwar period with government investment and encouraging consumption (known as Keynesian policies) for those of a neoliberal style (following von Hayek, whom Thatcher admired), the imposition of the rules of the free market, monetary deregulation, financial speculation, the purchase of state-owned enterprises at a low price, and the downsizing of government investment, that allowed the imperialist bourgeoisie to get out of the crisis at the end of the 1970’s. The England of industrial splendor changed into the queen of speculation, with the London Stock Exchange as a bulwark.

With Thatcher, the strategic alliance between England and the United States (that Tony Blair and his successors would continue, up to the present) was consolidated, that, with an economic policy of attacking the workers’ conquests (Reagan managed to advance after the defeat of the air traffic controllers’ strike, Thatcher, against the miners’ strike), they alike laid the foundations of what, after the fall of the former workers’ states in the USSR and Eastern Europe, was, during the 1990’s, the general lines of the bourgeois restoration, commonly known as neoliberalism.

The salutes by several of the imperialist governments and the international establishment, on learning of her death, are not an accident. It is worth highlighting the salute from Obama (presented so many times as a progressive President), who described Thatcher as “one of the great champions of freedom” and a “true friend” of the United States, or the words of the new Pope, Francis I , who also stressed the virtues of the “Iron Lady,” because of “the Christian values that underpinned her commitment to public service and to the promotion of freedom among the family of nations.” One would have to ask the people of Ireland or of Argentina if Thatcher represents a champion of freedom; one would have to ask the British workers what Thatcher was as a “public servant.”

The workers and the oppressed peoples are surely not going to miss this “Iron Lady,” who used her toughness against the interests of the working class.