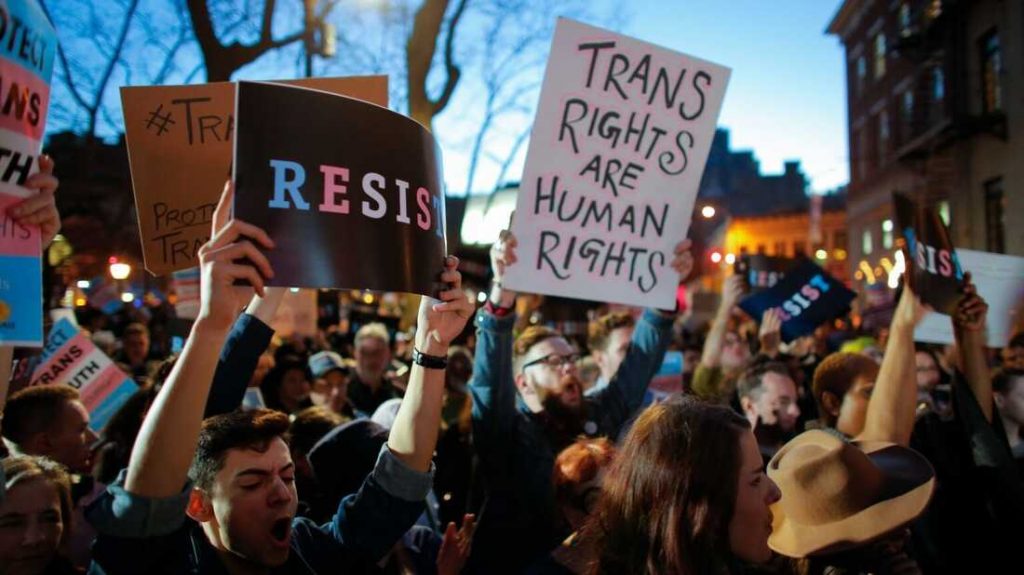 This week, Republicans released the text of a federal anti-trans bill introduced into the House of Representatives last month. Like many of its counterparts at the state level, the bill specifically attacks trans children and school employees who support them. The bill proposes to withhold all federal funding from any school that affirms a trans child’s gender.

What The Bill Does

The bill would be enforced by requiring any state agency applying for federal education funds to submit proof of the steps all schools are taking to comply with the bill, including a written policy and proof that the policy is posted in an easy-to-find place on each school’s website. If a parent believes a school or school employee is violating the law, they would be able to sue the school or school-related government agency. Among the most horrifying stipulations of the bill is that if such a lawsuit is successful, the school could be required to pay for the child to attend conversion therapy.

How The Bill Is Framed

The bill frames schools that protect the safety and wellbeing of trans children as “violating parental and familial rights,” as if the child does not have a right to privacy or a right to be safe by choosing if and when they want to disclose information about themselves that could put them at risk of harm from their parents.

Republicans are referring to the bill as the “Empower Parents to Protect Their Kids Act.” But let us be very clear: this disgustingly misleading name obfuscates the direct violence the bill does to children. A more accurate name would be the “Empower Transphobic Parents Act” or the “Put Vulnerable Children At Increased Risk of Sucide Act,” because that’s what this bill does.

The bill claims that affirming trans children’s genders is not an “evidence-based practice,” but this could not be further from the truth. Research specifically on the positive impact of accepting adults on LGB youth dates back to 2006, and in 2019, in a massive survey interviewing approximately 25,000 queer youth, The Trevor Project found that having just one accepting adult descreased LGBT youth’s risk of suicide by 40 percent. The survey also found that more than half of all trans and/or non-binary youth, and 42 percent of all LGBT youth, who had undergone conversion therapy reported a suicide attempt in the past year, a significant increase compared to those who had not. The Trevor Project’s survey also found that trans youth aged 13-17 (the population targeted by this bill) were significantly more likely to consider or attempt suicide compared to both cis youth of the same age and trans youth aged 18-25. And this data, of course, only includes those who survived their suicide attempts.

While these statistics are bleak, it’s also true that more than two-thirds of all Americans support the rights of trans children and oppose bills like this one. Furthermore, the same Trevor Project survey found that over half of all trans youth surveyed had already chosen to come out to a parent, and among the LGBTQ+ youth surveyed who came out to any adult, 79 percent reported having at least one accepting adult in their life (the survey report did not disaggregate trans youth for this statistic).

You might be interested in: “We Need Socialist Feminism. Join Bread and Roses to Fight for It.”

By banning school employees from supporting trans students, the bill aims to cut children off from a potential source of support — perhaps their only source of support, since schools can be one of the only places in which students’ social lives are not under the direct influence of their parents.

The bill also correctly recognizes protecting trans youth as a labor issue and aims to crack down on education workers’ rights and job security at the same time as it attacks trans youth. This kind of attack relies on economic pressures to control states, school districts, and individual workers. By threatening to withhold federal funds, the bill pressures school districts to carefully monitor and penalize employees in order to maintain their funding. Education workers are then put into the position of risking their livelihoods if they want to support their students.

The bill’s own framing text gets even more explicit about this connection, though, by blaming “powerful teachers unions” for schools’ increasing acceptance and support of trans children. This language uses and reinforces existing transphobia and directs it at organized labor.

This particular bill is unlikely to pass, and probably unlikely to even make it out of committee, but it is a harbinger of things to come and an indicator of the upcoming Republican agenda. And we cannot rely on Democrats to protect trans children from bills like this one, since many Democrats, including Hillary Clinton, are already arguing that Democrats shouldn’t pursue trans rights at all in order to gain support among transphobic voters. Instead, we need a mass movement of socialists feminists prepared to fight tooth and nail against any and every attack against trans people, and all LGBTQ+ people, in the coming period.