Gig workers at Berlin’s food delivery service Gorillas have once again gone on strike, marking the third wave of mobilizations in the last year. While the workers are more experienced and better organized than ever, they face increasing pressure from management to give up on their demands. 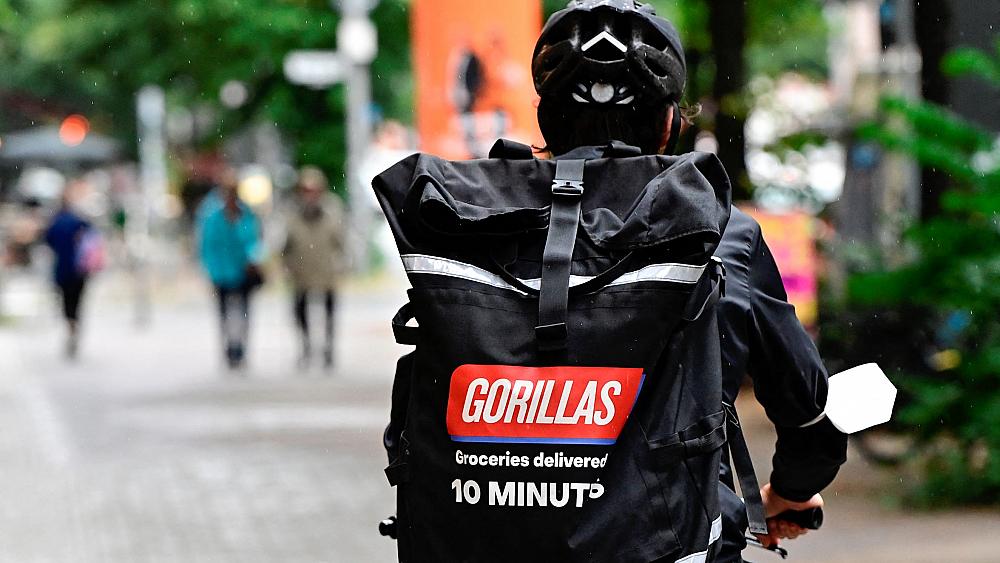 GERMANY: If you order groceries from the app Gorillas, a bike rider in a black jacket with a massive canvas backpack to match is supposed to deliver them within 10 minutes. Almost since it arrived on the market, the company has come under fire for the illegal and dangerous working conditions that are intertwined with its business model, which is predicated on precarity and automation.

During Striketober, Gorillas workers have once again been on strike, marking the third wave of mobilizations in the last year. This time, both riders and warehouse workers are taking part, in districts across the city. While the organizers are more experienced and better prepared than ever, they face increasing pressure from management to give up on their demands. In the latest development, the situation has escalated into a legal battle in the German labor courts. Two Gorillas employees are suing the company for its strikebreaking practices, demanding fired workers’ reinstatement and taking a stand more broadly for workers’ rights to wildcat strike.

The Berlin company employs 10,000 people and counting, and is quickly expanding across Europe. The majority of the workers are rank and file — delivery riders and warehouse workers who prepare the orders. In Berlin, many are migrants and students from abroad, especially from Chile, Argentina, Turkey, and increasingly from South Asia.

Starting in February, delivery riders began organizing wildcat strikes when the delivery riders were not issued suitable equipment for winter weather conditions, leading to injuries and accidents, some of which resulted in hospitalizations for back and shoulder injuries.

That was only the beginning. Abysmal payroll procedures mean many employees receive late and insufficient pay, breaching their contracts. On top of all this, automated scheduling at Gorillas consistently violates German labor law, which states that employees must have at least 11 hours in between shifts. In its efforts to optimize itself, the company has intensified workers’ rate of order fulfillment to the point that they are not allowed to take proper breaks as is their right under the law. For reasons such as these and more, workers called a general assembly on June 3 to elect members to a new legal works council. Common in Germany, such councils allow workers more of a say in procedures such as hiring and firing.

On July 17, when Santiago, a rider, was fired on the last day of his probation without due cause, workers began the next wave of spontaneous strikes. They are pressing for Santiago’s reinstatement as the basis of a larger platform of demands, which includes complete and on-time pay, safer equipment, and shift scheduling that adheres to German labor law.

Gorillas management met this growing movement with disingenuous social media posts in combination with more ruthless and sinister strikebreaking tactics, such as mass firings, on the grounds that the strikes are “illegal” since they are not backed by any official German unions. There have also been other alterations by strikebreakers attempting to use force to break through picket lines, leading the police to intervene.

By late summer the strikes were broken up and it was back to business as usual. As of October 3, however, another wave of strikes has begun — the largest and most widespread so far. The workers’ demands have stayed just about the same. The strikes were precipitated by consistent breaches of contract, insufficient pay, and scheduling that violates German labor law. Strike participation has only accelerated with the mass firings of several dozen strikers. Those who have taken part in the strikes report having received phone calls from anonymous numbers asking them to state whether they were involved; these were followed by notices of termination. In the midst of all this, Gorillas received close to a billion euros in its latest funding series from investors, despite what are now well-known violations of labor laws.

This latest wave of strikes has coincided with the company’s implementation of a new operations transfer wherein 1,700 of 2,000 Gorillas workers in Berlin received notices that their contracts have been moved to a newly founded subsidiary company. It is hard to deny that this is anything but a bureaucratic sleight of hand, a form of union busting intended to weaken the workers’ ability to establish a works council. Not all of management’s attempts to dispel the mobilization efforts have been successful, though. For example, the company had previously hired South Asian gig workers to replace those who had been fired for striking as a means of mitigating the unity of the strikes. Yet now the South Asian workers make up some of the strike’s most active participants.

Thus, the Gorillas workers find themselves in a similar position as before, striking for the same unmet demands — safer working conditions, being paid in full and on time, and shift scheduling that follows German labor law by allowing workers time for adequate breaks — while facing escalating strikebreaking tactics by Gorillas management. This time around, however, the strikers are more organized and better prepared.

Still, thus far, the strikers have not been officially supported by the service sector union, ver.di, which makes them more vulnerable to strikebreaking because their strikes are not backed by legal protections. Especially now that they await their court hearing, the workers need our solidarity in the face of escalating capitalist aggression and lack of bureaucratic support.

“Striketober” in the United States has seen a big wave of workers’ struggles, including by workers at tech companies who have to fight to win traditional workers’ rights. The Gorillas strike is an important contribution to workers’ organization against “new economy” exploitation.

Lily is a graduate student at the Freie Universität Berlin studying political economy, labor, and leftist internationalism. Her current research focuses on how workers in the service industry are leveraging for better conditions in the post-lockdown economy.