Governor Cuomo Calls For Medicaid Cuts in Midst of Pandemic

New York governor Andrew Cuomo wants to cut the state’s Medicaid spending by $400 million in the next year. His long-standing dream of neoliberal healthcare “reform” is alive and well, even in the midst of a global pandemic that has brought New York City to the brink of disaster. 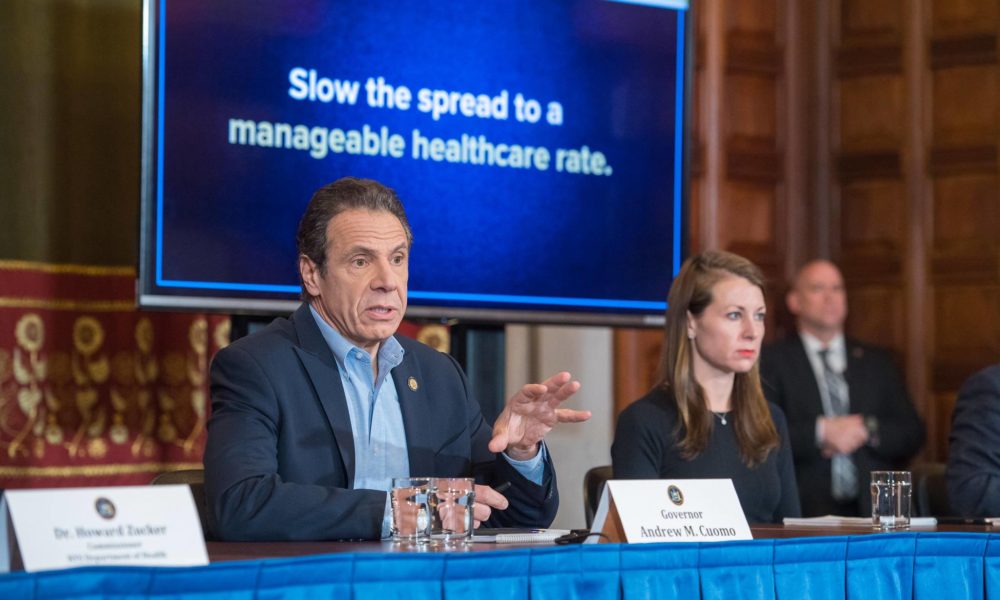 A panel appointed by New York governor Andrew Cuomo unveiled on Thursday its plan to reduce the state’s Medicaid spending by some $400 million over the next year. The plan will now go to the state legislature for consideration. Remarkably, the proposal is being put forward in the middle of a healthcare crisis that threatens the very lives of the many vulnerable New Yorkers who depend upon such services as Medicaid.

The proposed $400 million cut is part of a bigger program to slash the medicaid budget by $2.5 Billion over several years. As the state’s Department of Health website put it, the panel, known as the Medicaid Redesign Team (MRT), was put together in February with the goal of “restoring financial sustainability to the Medicaid program while connecting other programmatic initiatives that would advance the core healthcare strategies [Cuomo] has pursued since taking office in 2011.”

As the Doctors Council noted in an urgent call to action released on March 10, the MRT has “little to no frontline doctor representation or representatives of patients and communities, and no one from NYC Health + Hospitals (NYCH+H).”

NYCH+H is New York City’s public hospital system. Among its many vital operations, it acts as a safety net, providing essential services to the uninsured and underinsured — including many Medicaid patients — whom private hospitals choose not to serve.

Out of the $399 million in cuts proposed by the MRT, $186 million are targeted directly at NYCH+H — with the aim, as the panel’s executive summary declares with almost Orwellian perversity, of “strengthening” that system. And further elements of the plan, though not focused specifically on NYCH+H, will inevitably fall especially heavily on that body.

A key element of the plan for “strengthening” NYCH+H is the introduction of capitation for “the highest cost Medicaid patients.” Capitation is a scheme whereby healthcare providers are paid a fixed amount per patient, rather than billing for the actual care provided. Any cost above this fixed amount must be paid for by another means.

The New York Post suggests, plausibly, that this excess cost will be shifted “onto the city’s books” — revealing these so-called “savings” as a mere accounting maneuver on the part of the state government.

Capitation is beloved of neoliberal healthcare “reformers” because, from their point of view, it disincentivizes “unnecessary” or “excess” care. Translation into human terms: it places pressure on doctors to under-serve, or even to decline to treat, patients whose care will cost more than the per-patient allowance.

In other words, capitation amounts to “cutting” costs by passing them along to those least able to pay — or, if they cannot pay, by simply not treating them.

The plan also makes changes to the state’s Indigent Care Pools (ICPs), funding mechanisms whereby hospitals that provide treatment to the uninsured and underinsured (including some Medicare and many Medicaid patients) are reimbursed. The state has separate ICPs for public and “voluntary” (i.e. private) hospitals, and these are combined with federal matching funds to make up what are known as disproportionate share hospital (DSH) payments.

A long-standing issue for NYCH+H is the manner in which the state distributes these funds. In New York, the DSH funds allocated for private hospitals and many non-NYCH+H public hospitals are fixed by law, and therefore guaranteed. But the bulk of NYCH+H’s funding comes from a “residual pool” which, as the name implies, consists of whatever is left over once these other entities have all been paid.

Thus, while NYCH+H leads the way by taking on a disproportionate share of uninsured and underinsured patients, it is essentially the last in line when it comes to receiving funding for this care. This, again, is not a new state of affairs. And indeed, at first glance, the MRT proposal seems at least partly to redress the inequity of the situation.

Recall that the state’s contribution to DSH funding is its indigent care pools (ICPs). The MRT proposes to reduce the ICP for voluntary (private) hospitals by $75 million, “by reducing distributions to hospitals that have less than the statewide average in government pay revenue (i.e., Medicaid plus Medicare).”

The plan also calls for a further cut of $12.5 million, by eliminating a funding mechanism known as the “transition collar,” thereby (in the MRT’s words) “ending supplemental payments that are disproportionately distributed to wealthier hospitals.” But rather than redistributing those funds to hospitals in greater need, the MRT proposes to simply cut them outright. Meanwhile, the MRT plans to entirely eliminate the ICP for public hospitals.

Thus, New York City’s public hospital system, which is already experiencing a years-long crisis of underfunding and resource starvation, is now being “strengthened” by way of massive cuts that seem certain to affect most severely the very people who are most in need of care.

All this in the midst of a still-growing pandemic, in a huge metropolitan area that has become the epicenter of the crisis in the US.

Passing the Buck… to Trump

To be fair, it’s not as if the administration in Albany is taking no notice of present conditions. According to the Department of Health website, “The State will continue to invest significant resources in stopping COVID-19, and it is expected that Federal disaster funding that includes enhanced Medicaid support will support the modification of these reforms if they’re ultimately approved by the Legislature.”

What this amounts to, however, is nothing more than an attempt to divert responsibility for the cuts to the Trump administration — for whom “enhanced Medicaid support” is not exactly a priority in any circumstances.

Yes, of course federal funding is essential, in this or any crisis. But the purpose of such funding must be to increase the aid available to those who need it, not to offset the state’s own slashing of its healthcare system.

Cuomo has been busy playing this same double game — “our hospitals need help” on the one hand, “let’s cut spending to the bare minimum” on the other — with regard to New York’s shortage of hospital beds.

In a press conference on March 16, he managed the curious trick of sounding alarm bells over the shortage, while continuing to endorse unapologetically the cold calculus that created this very condition. As reported by CBS News, here is Cuomo’s assessment:

You only have 53,000 hospital beds. You only have 3,000 ICU beds …Why? Because our healthcare system is basically a private system. They don’t build capacity that they don’t need. They don’t build extra ICU [intensive care unit] beds just in case. An intensive care bed is very expensive. They don’t build a wing of ICU beds that sit vacant for 10 years on the off-chance that there’s going to be a public health emergency and you’ll need the beds… so we don’t have them. We have the capacity that people use day-in and day-out. And that’s not just New York. That’s every state in the United States. You now have this influx, you can’t handle it.

It would be bad enough for any healthcare system, private or public, to plan only for “the capacity that people use day-in and day-out,” making little or no allowance for the reality that a healthcare crisis can arise at any time. But in fact, this isn’t what has happened in New York, and Cuomo knows it.

Over the past 20 years, New York has eliminated some 20,000 beds through hospital closures, budget cuts, restructuring of insurance and aid programs. The beginnings of this trend predate Cuomo himself, but since taking office in 2011, he has energetically carried the program forward.

The problem in New York isn’t that the healthcare system failed to build capacity it “didn’t need.” It’s that Cuomo and his cronies have been actively working to reduce what they see as excess capacity.

The Nightmare of “Lean” Hospitals

The vision Cuomo presented in that press conference was not the historical reality of hospitals in New York, but rather his own dream of how healthcare systems should be run. It is a dream shared by neoliberals the world over.

This is a vision of “lean management,” a philosophy that views every workplace — from factory floors to office suites to emergency rooms — as a site for the production of widgets, and then prioritizes the minimizing of “waste” above all other considerations. Minimizing waste, in this view, means maximizing profitability, not only by getting the number of widgets produced exactly right (not too few, not too many), but also by squeezing as many widgets as possible out of each worker, and by getting rid of as many “excess” workers as this squeezing will allow.

Unsurprisingly, one thing lean management tends not to address is the huge amounts of money that are so often paid to corporate executives. Indeed, purveyors of lean management models, such as the notorious consulting firm McKinsey & Company, often actually advocate raising executive compensation.

In an interview published this week at The Indypendent, NYC pediatric emergency room nurse Sean Petty discusses the effects of lean management on the healthcare system in which he works:

In healthcare, [“waste”] means anything that can’t be proven on a computer. So holding a patient’s hand and all the non-tangibles nurses do is considered waste…. This is all an attempt at “just-in-time” healthcare delivery, which means that patients in hospital beds are flipped as quickly as possible, bottlenecks in the emergency room are considered good because there is a constant stream of patients occupying those beds, and supplies and the number of nurses are stripped to the bare bones. In a pandemic, this makes our system as brittle as a cracker.

When cuts began to affect the emergency room where he works, he and his colleagues protested that they needed adequate staffing to handle the influx of patients that might come at any time.

“We were told explicitly by management that we can longer staff based on a ‘what if’ scenario,” he says. “Well, of course, an emergency room is one giant “what if” scenario in normal times, but then ‘what if’ a pandemic comes?

“Unfortunately, we now know, and it’s going to be really, really bad.”

Chris is a freelance writer and musician. His work has appeared in Socialist Worker, Skeptic Jacobin.com, and Truthout.org. He lives in Brooklyn.