Greek crisis: stories from our correspondents in Athens

From Athens, I am impressed by the eagerness of the Greek people to debate about the country’s future.Politics is everywhere. On this site we will be publishing interviews with Greek activists and workers in the coming days. 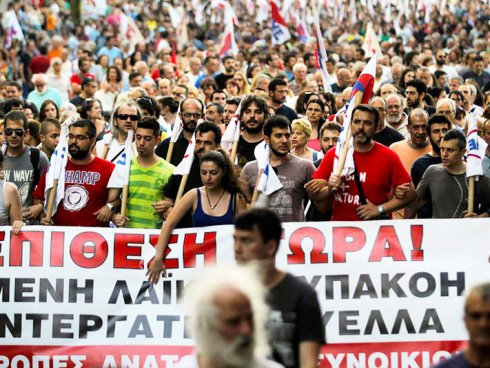 The summer’s heat is suffocating. This is the Athenian summer. And the political atmosphere keeps getting hotter and hotter. Summertime means Greek frappe, an iced coffee drink made with instant coffee granules. Politics is everywhere, on the streets, in the cafés, bars and restaurants. In Athens, many of the discussions revolve around the aftermath of the referendum. People are eager to talk and exchange views on the situation… they are asking themselves “What happened with the ‘No Vote’? Who has stolen our OXI?” They are seeking an explanation for Tsipras’ capitulation before the Troika.

Where is the economic crisis? Everywhere…. closed shops, retail premises left empty, people begging on the streets show the devastating effects of austerity. Posters cover the walls, lamp-posts, and bus stops. Painted banners hang from buildings and railings. All say “Oxi” and show the intense debate within society.

The political climate is tense. On Thursday July 30, Syriza’s Central Committee discussed its internal disagreement over the proposed Greek bailout programme and the agreement with international creditors. This meeting had been awaited with great suspense following Greek Prime Minister Alexis Tsipras’ two-hour radio interview with the director of the “Sto Kokkino” on Wednesday afternoon. During the interview Tsipras threatened dissenting members of his ruling Syriza party with elections. While he said he respects those within the party who have a strategy different from his, he finds it “surreal” that dissident members express their support for the government but don’t vote for the economic proposals it is trying to implement.

This is our account of Syriza’s Central Committee meeting on 30/07/15.

On Tuesday July 28, the charges faced by three activists arrested on July 15 during the mobilisation in Syntagma Square were announced. The public sector trade union federation in Greece, ADEDY, had called a general strike for Wednesday July 15, against the Third Memorandum.

Since the crisis started workers and activists throughout the public and private sector unions have gone on strike on innumerable occasions. Many are wondering: What did we do wrong? What’s next?

A positive thing here is that solidarity doesn’t take holidays. Four hundred refugees from Syria and Afghanistan manage to survive thanks to the solidarity brought by the local community.

We’ll be back with more news and interviews on Monday.