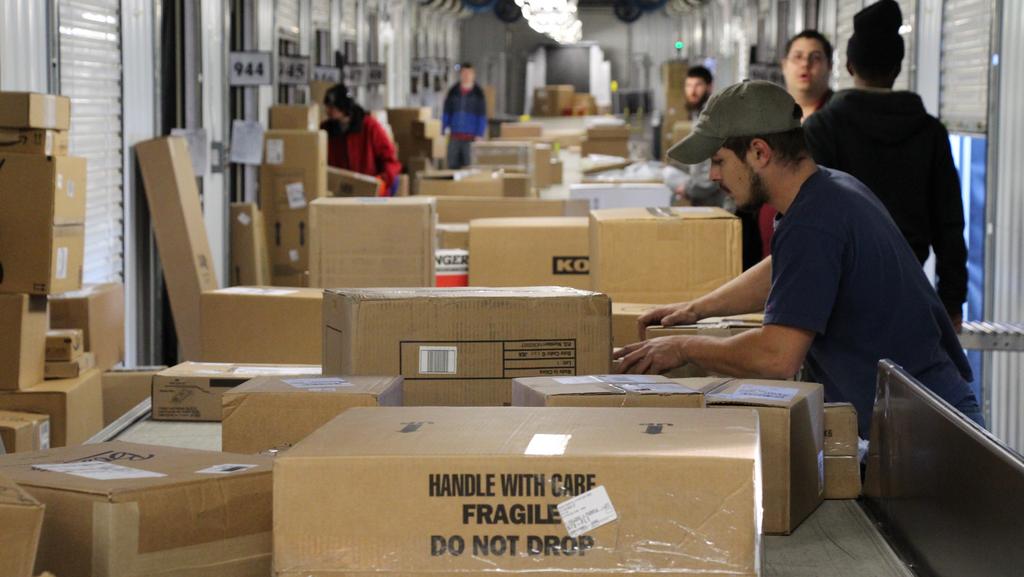 The winter holidays have arrived, and the shopping season is popping off. For the logistics sector, this means peak season. You will start seeing Christmas decorations and people wearing coats amid the first snowfall, and you will also see more Amazon, USPS, FedEx, and UPS workers carrying crazy amounts of packages. I work for the latter, the so-called Big Brown.

This year, UPS drivers made the national news, because they work long shifts, at a fast pace, and often have to pee in bottles. Many videos and photos have been shared of the high temperatures inside the trucks and workers suffering heat exhaustion during the summer. This can have extreme consequences: in Pasadena, California, Esteban Sanchez Jr., a 24-year-old UPS driver, died on June 25 inside the package car after collapsing in sweltering heat.

But there is another sector of UPS workers who get less publicity and don’t get the warm treatment from customers, since they work behind the scenes: the warehouse workers. And the company doesn’t even care if we wear the trademark brown.

We are essential for the company; we load, unload, scan, sort, and stock packages. Without us, the trucks on the streets would be empty. Nevertheless, we are treated as disposable.

The workforce is mainly Black, Brown, and immigrant. The turnover is high, and the company takes advantage of the most unemployed or underemployed sectors to constantly refresh this workforce — from young people working their first job to people in their 50s who can’t get another job. Most of us are part-timers. We start at midnight or at the dawn, and by 9 a.m., all the trucks need to start heading out. Our starting hourly wage is $15.50 — barely above New York City’s minimum wage. We work an average 20 to 25 hours a week, though the Teamsters-UPS contract guarantees us only 17.5 hours. So our weekly pay can vary from $271.50 to $387.50. Except during the peak season, when there is a lot of overtime.

For this reason, many of us have two or three jobs. Many of us have no days off. Because the nightshift is so tiring, finding a second or third job is difficult. Most UPS warehouse workers have gigs at other logistic companies or in the food industry; some make deliveries or drive for rideshare companies. The time to rest, sleep, study, and enjoy life becomes reduced to almost nothing. We are drained, mentally and physically. We suffer pain and injuries to our backs, knees, and hands. Many have insomnia or other sleeping problems.

I have been working for two years as a preloader, the person in charge of loading and unloading the trucks. Depending on the shift, most of us wake up around 2 a.m. to clock in at 3:30 or 4 a.m. (earlier in peak season), and we work until 8 or 9 a.m. The start of our day is already hectic; commuting to the warehouses at night has its complications, like having to wait for one or two buses or trains for over 20 minutes.

Once you arrive, you can be tasked with loading up to four trucks, each of which can carry more than 250 packages. Imagine thousands of pounds of industrial and consumer items overflowing on the conveyor belt; medical supplies, tires, bed frames, hardware tools, Christmas trees, and other large items.

Warehouses have many conveyor belts, each distributing thousands of packages among more than a dozen trucks and trailers. Belts are full of packages that you have to sort at high speed, picking the ones that belong to each of our designated trucks and shelving them according to a route-delivery sequence.

A voice from the speakers announces when your 10-minute break starts. It reminds you when you have only three minutes left, then two minutes, one minute. Depending on which belt you are working on, bathrooms can be far away, and there is only one or two sources of water for the hundreds of workers. In the summer, temperatures are very high; given the fast pace of work, you end your shift soaked in sweat. In winter, the big warehouses keep all their doors open for the trucks, making the place frigid.

A big fight for drivers is to end the two-tier system, which was undemocratically imposed by the Hoffa leadership. Most union members voted against it in 2018. Since then, the two-tier system has created two categories for drivers, with a new “second class” of drivers who do the same job as long-term drivers but are paid up to $10 less per hour. But the imposition of a two-tier system isn’t unique to UPS — this strategy has been imposed by bosses across industries in order to undermine the historic conquests of the working class, and they’ve hired new workers under new categories that have cut wages, benefits, and rights.

A similar system is imposed on the warehouse workers, one that is created by hiring seasonal workers. To become a union member with contractual rights on the job, you have to work 40 days in a 70-day period. Of course, peak season — from October 15 to January 15 — doesn’t count. The reason is quite simple: the company wants workers without rights who can be exploited, sent home for the day, or fired at will.

Once you are hired as a seasonal worker, neither your job nor your work hours are guaranteed. It is heartbreaking to see many of the seasonal workers sent home after showing up at 4 a.m. expecting to work. Management speculates and plays with people’s lives every day. They always care about having the fewest workers possible to do the daily job, and they use these reserve workers to take over for those who are on vacation, sick, or showing up late. Seasonal workers have fewer rights and benefits; they do not have paid holidays like Thanksgiving Day, and their Black Friday shifts are paid at the normal rate instead of at triple time, as required in the union contract. The demand for equal jobs, equal pay, is essential to breaking this false division among workers.

Instead of guaranteeing everyone paid work hours (full-time for those who need it and 25 paid hours a week for part-timers), and distributing the work among all the hands available, the bosses choose to overwork us with four trucks and over a thousand packages. A more humane and sustainable workload would be two trucks per worker, which would drastically reduce injuries, create more jobs, and improve the quality of the work.

The contrast with the warehouse workers is jarring.

This is the reality across the logistic sector. The companies’ billionaire profits are based on grueling working conditions and low wages. But warehouse workers have been fighting back. On Black Friday, Amazon workers in the United States and more than 30 countries around the world carried out everything from strikes to protests at their warehouses. The international Make Amazon Pay campaign included strikes at 18 warehouses in Germany and France, and protests in the U.S., India, Japan, Australia, and South Africa. At an Amazon warehouse in Missouri, workers walked out demanding a $10 raise.

Minimum-wage workers have been badly affected by inflation this year. While a new UPS-Teamsters contract negotiation is starting in March, the need for an immediate raise is acute. Warehouse workers everywhere are showing that you can fight to improve your working conditions outside the regular contract-negotiation period.

The current contract ends in July 2023, and it is expected that Teamsters will go on strike if demands are not met. Workers are demanding an end to excessive overtime, an end to the two-tier system, higher pay for part-time warehouse workers, more full-time jobs, job security for feeders and package drivers, an end to surveillance and harassment, and a heat exhaustion and injury prevention plan to cope with extreme weather.

Drivers and warehouse workers have unite for the upcoming contract negotiation. Improving our working conditions will mean a victory for us all. It will improve our quality of life and break the divisions imposed by management, making a stronger unionized workforce at UPS.