At least half a million workers in South Korea from across construction, transportation, service, and other sectors walked off their jobs for a one-day general strike on October 20, 2021 to win better conditions and increased self-determination for workers. 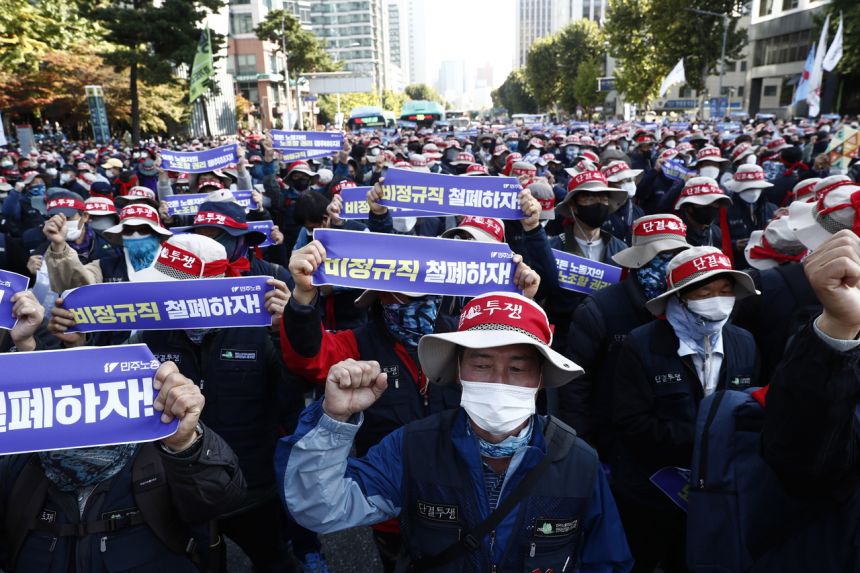 At least half a million workers in South Korea from across construction, transportation, service, and other sectors walked off their jobs for a one-day general strike on October 20, 2021. The Korean Confederation of Trade Unions (KCTU), the country’s largest labor organization with more than one million members, staged a nationwide rally to win better conditions and increased self-determination for workers. About 80,000 workers participated in rallies in 13 cities across the country, with 27,000 workers participating in Seoul alone.

The strike demands can be categorized into three broad categories: abolishing “irregular work” (part-time, temporary, or contract labor with few or no benefits) and extending labor protections to all workers, giving workers more decision-making power around economic restructuring in times of crisis, and nationalizing key industries like healthcare and basic services such as education and housing. Striking workers are demanding that public housing increase from 5 percent to 50 percent of housing stock and that the government hire one million new care-workers to provide free elder care and child care, expand public medical care, provide free college prep, and end the university ranking system. They are also fighting for the end of loopholes in labor laws that permit employers to cheat their employees out of basic rights, such as the right to organize, as well as their access to benefits and compensation for work injuries.

South Korea ranks third in the world on highest annual working hours and, in 2015, ranked third highest in workplace fatalities among member countries of the Organization for Economic Co-operation and Development (OECD). It is estimated that approximately 40 percent are considered “irregular workers” and are primarily in the gig economy. These irregular workers include temporary and contract workers and do not receive the full benefits promised in existing labor legislation.

Increasingly militant members of the working class are bringing to light the terrible working conditions that many have endured. Cleaning staff at LG Towers shared that LG hired goons to pour water into the workers’ tents as they slept while they were protesting layoffs and exploitative workplace conditions in the cold winter months. Coal miners at government-owned Korea Coal discussed how many miners are suffering health conditions from breathing in coal dust and overwork. Irregular workers at the mines do the exact same work as full-time workers and suffer from the same ailments, but don’t get even half the same pay as their counterparts.

Chaebol (i.e.,corporate conglomerates controlled by single families, such as Samsung, Hyundai, and LG) have created and fomented social and economic problems. Chaebols are responsible for the 1997 Asian financial crisis as well as the economic concentration and industrial consolidation that accelerated after the crisis, which culminated in layoffs and increased precarity for workers in key industries such as the automobile industry. Sixty four chaebols claim 84 percent of the GDP, yet provide only 10 percent of jobs. As major business conglomerates curtail new recruitment, workers have to increasingly take on second and third jobs to be able to pay their bills due to the inherent instability of low-hour, limited contract, or no-contract work.

The police cracked down heavily on the protests, deploying officers and installing bus walls to block movement from Seodaemun Station toward the presidential office near Sejong-no, as well as clashing with protestors at checkpoints. KCTU President Yang Kyung-soo and at least 30 other union organizers were arrested and jailed, according to the director of policy for KCTU. Officials cited coronavirus prevention measures as the reason to prevent protests, with Minister of the Interior and Safety Jeon Hae-cheol going so far as to say that the protests would destroy the expectation of normalcy at this critical turning point.

But there should not be any expectation of normalcy. While South Korea was heralded worldwide as a model to follow in terms of public health disease prevention measures, the coronavirus crisis also laid bare workers’ true precarity. Airline, automobile manufacturing, and shipbuilding industries are laying workers off en masse, while average apartment prices across the country have jumped more than 70 percent over the past five years. All of the steps that President Moon has taken since 2017 to try to decrease housing prices, such as regulatory steps like raising capital gains taxes on house flipping and property taxes on multiple-home owners, have ultimately been unsuccessful. From July 2020 to July 2021 alone, home prices jumped by 14.3 percent. Household debt in South Korea is almost double the average household income, but the government’s response to rising household debt and inflation is to raise interest rates to try to decrease inflation.

The strike puts forward some advanced demands, such as the nationalization of critical industries and increased worker self-determination in times of economic crisis. Many workers were mobilized from a variety of industries, such as education, civil service, manufacturing, logistics, and construction sectors. Bourgeois capitalist governments will always try to hamper worker self-determination and nationalization under worker control. The Korean government might bow to social pressure and offer some concessions to workers, such as increasing channels for workers to provide input into economic decision making (without actually implementing critical changes), or tossing some money into social services. However, workers deserve so much more than the concessions that may or may not be granted.

It’s inspiring that workers are fighting against the neoliberal offensive that completely decimated the social safety net, and are fighting for better working conditions and better lives, period. In the United States, in the imperial core, we must support Korean workers’ fight for the end of irregular and precarious labor, improved working conditions, more decision-making power, and increased nationalization, while also fighting for more for all workers everywhere. For the Korean workers to win their demands, they need to continue fighting, extending the one day strike into an indefinite general strike until they get what they rightfully deserve. Only by exerting the full power of the working class through working-class methods can the workers win their demands.