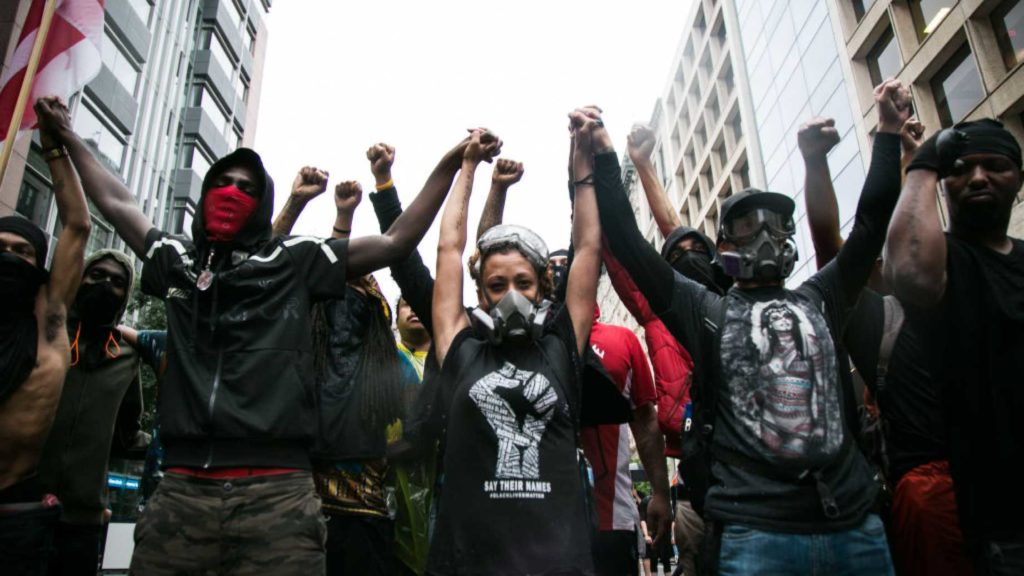 Not content with draconian attacks on immigrants, Muslims, trans people, and women, Trump and the right wing in Congress have now set their sights on the Left. This week Ted Cruz and the pro-Trump senator Bill Cassidy introduced a resolution to label Antifa as a “domestic terrorist organization” and called on the FBI to investigate the group for supposed criminal activities. Yesterday, Donald Trump tweeted that he was considering the resolution, arguing that it would “make it easier for police to do their job.”

Consideration is being given to declaring ANTIFA, the gutless Radical Left Wack Jobs who go around hitting (only non-fighters) people over the heads with baseball bats, a major Organization of Terror (along with MS-13 & others). Would make it easier for police to do their job!

While Cruz’s congressional resolution would be largely symbolic and would not change any existing laws, the measure, if passed, would surely have a chilling effect on the entire Left. We should defend Antifa against this attack—and all attacks from the right—with every resource at our disposal.

Antifa (short for antifascist) is a collective of activists tracing its history back to the Antifascist Action and related groupings in Nazi-era Germany. The modern iteration of Antifa began in the 1970s and 80s. The collective has grown dramatically since the election of Trump in 2016 and is today nearly a household name. Its members primarily adhere to anarchism, although activists of other political traditions do take part. It mobilized during the Trump inauguration and has disrupted several right-wing rallies and demonstrations. Antifa began to make national headlines after several bloody confrontations with far-right groups in cities like Berkeley and then Charlottesville. In the latter city, white supremacists brutally murdered activist Heather Heyer and injured 19 others in 2017.

This is not the first time Antifa has been targeted. The Trump administration attempted to convict close to 200 activists, including Antifa members, who demonstrated during his inauguration on criminal charges—although the attempt failed and all charges were dropped earlier this year. North Dakota passed an anti-mask law in 2017 aimed at left-wing activists and Antifa, whose members often cover their faces during demonstrations. Even the “progressive” city of Portland recently proposed a similar law. Members of Congress have tried to push a federal version of anti-mask legislation, but they have so far been unsuccessful.

The efforts of Cruz and the right to demonize Antifa and the Left in general serves as a useful distraction in the face of a true resurgence of right-wing terror in the country. Not only have openly white supremacist and fascist thugs marched through major cities, but acts of right-wing violence have reached levels not seen in decades. These acts include the murder of nine Black church members in Charleston and the 2018 attack on the Tree of Life synagogue in Pittsburgh, which killed 11 people. Meanwhile, anti-Muslim hate crimes have spiked across the country.

Besides these clear attacks on racial and ethnic minority groups, several other lone-gunman mass shootings, including those in Parkland and Orlando, Florida, were carried out by men who espoused far-right, xenophobic, or misogynist views.

Of course, all of these trends occur within the context of a racist and anti-immigrant presidential administration in the U.S. and the rise of right-wing governments around the world, all of which have made the persecution of immigrants and minorities their first priority. Trump himself declared on the campaign trail that he would block all Muslims from entering the country. He declared that there were some “good people” among the neo-Nazi groups that marched in Charlottesville. The UK’s new prime minister, Boris Johnson, has called Muslim women wearing the niqab “bank robbers” and has used the most offensive slurs possible when speaking about Black Africans. While tens of thousands of migrants are arrested, locked in cages, starved, and abused, the Right has chosen to focus on preventing “violence” from Antifa, a group which even conservative sources admit is not responsible for taking a single life.

The attacks against Antifa serve another purpose too. Repressing the Left is primarily a tool for the capitalist class to fight workers’ demands for wage increases and improvements in their living conditions. As long as the workers have no political representation, they cannot effectively make their demands heard and are instead forced to choose between the lesser of two pro-business evils. In times of crisis, including the long crisis that began in 2008, this is a particularly important tactic for capital to maintain profitability.

Antifa is not the only organization on the Left facing increased persecution and criminalization either. Since 2017, at least 18 states have passed or proposed laws against protesting pipeline construction, and new repressive laws may be on the way. According to the Intercept, “Legislation proposed by the Trump administration would prescribe up to 20 years in prison for ‘inhibiting the operation’ of an oil or gas pipeline.” In Hawaii, more than 30 activists were jailed for fighting back against the construction of a NASA telescope on traditional indigenous lands. This is not to mention the use of heavily-militarized police responses to demonstrations against police killings in Black communities, like that of Michael Brown in Ferguson, Missouri.

The courageous young people of Antifa have helped to bring national attention to the Right’s rise and have stood up to reactionary attacks on women, immigrants, and people of color. Those who believe in ending oppression and exploitation should be ready to defend Antifa from political attacks originating both inside and outside Congress. We do not share the method of Antifa. We believe that isolated confrontations between a small minority of the working class and the Right or the police will not defeat xenophobia or racism. Rather, we believe in the power of the working class to change society—strikes, mobilizations, and the organization of a mass workers’ party willing to take political power. However, we will not join in on the hand-wringing of both the Right and the liberals over the “destruction of property” caused by Antifa, nor do we concern ourselves over the right-wingers who have felt a few hard blows at the hands of Antifa members.

Socialists and all those concerned with ending oppression and white supremacy should say loud and clear: Hands Off Antifa!